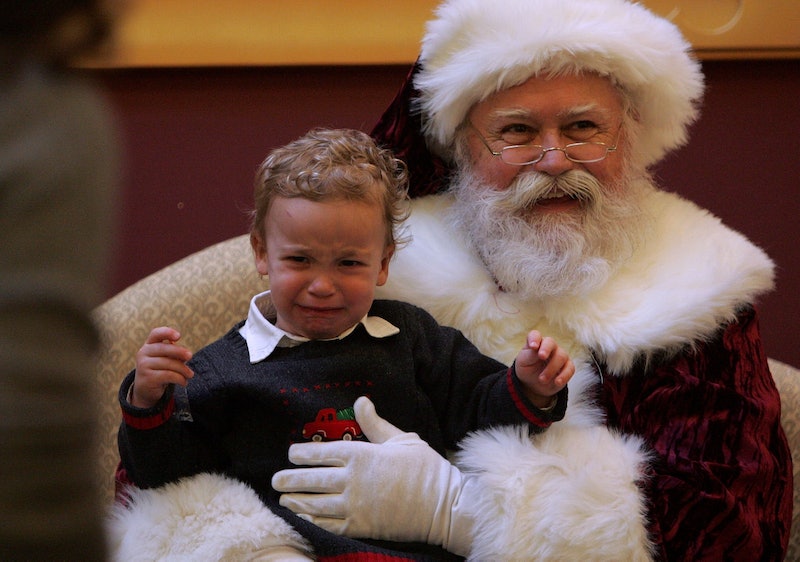 On a recent episode of Late Night, host Jimmy Kimmel showed his audience a series of faces of screaming children for the audience to wager: Santa’s lap or flu shot? This wouldn’t be such a tragically hilarious exercise in human failure if a wailing tot on St. Nick’s knee wasn’t already such a time-worn fixture of American culture. Kimmel manages to capture perfectly the paradox of wanting to please but ultimately traumatizing one’s child in the name of Christmas.

During Kimmel's skit, look on in horror as the disembodied faces of children in absolute agony flash before your eyes. Oddly enough, the audience (presumably some of whom were parents) were able to distinguish with little effort which crying children were victims of vaccination terror and which were casualties of holiday cheer. I’ve personally never understood the emotional or tangible gain of parents sitting their babies on the laps of fat men while a photographer tries desperately to make the picture appear natural. Please peek at these photos and decide whether any number of these would be pictures you’d want to share with your friends and family to demonstrate the health and happiness of your kin (the one of Santa fake-crying along is particularly sad).

Anyway, this is certainly not to suggest that all of Santa meet-and-greets result in meltdowns. Apparently the majority of Claus photo ops go over without a glitch. Those more candid moments, however, do make for great television. Take a look for yourself in the clip below.

More like this
Bennifer, Kravis, & 14 Other Fun Celeb Couples Halloween Costume Ideas
By Emma Carey and Brittany Leitner
10 Stranger Things-Inspired Halloween Costumes For True Fans
By Emma Carey
Stormzy’s “Mel Made Me Do It” Is A Tribute To Black Talent & Success
By Catharina Cheung
26 Ghost Story Podcasts To Get You Ready For Halloween
By Jessica Booth, Mia Mercado, JR Thorpe and Emma Carey
Get Even More From Bustle — Sign Up For The Newsletter