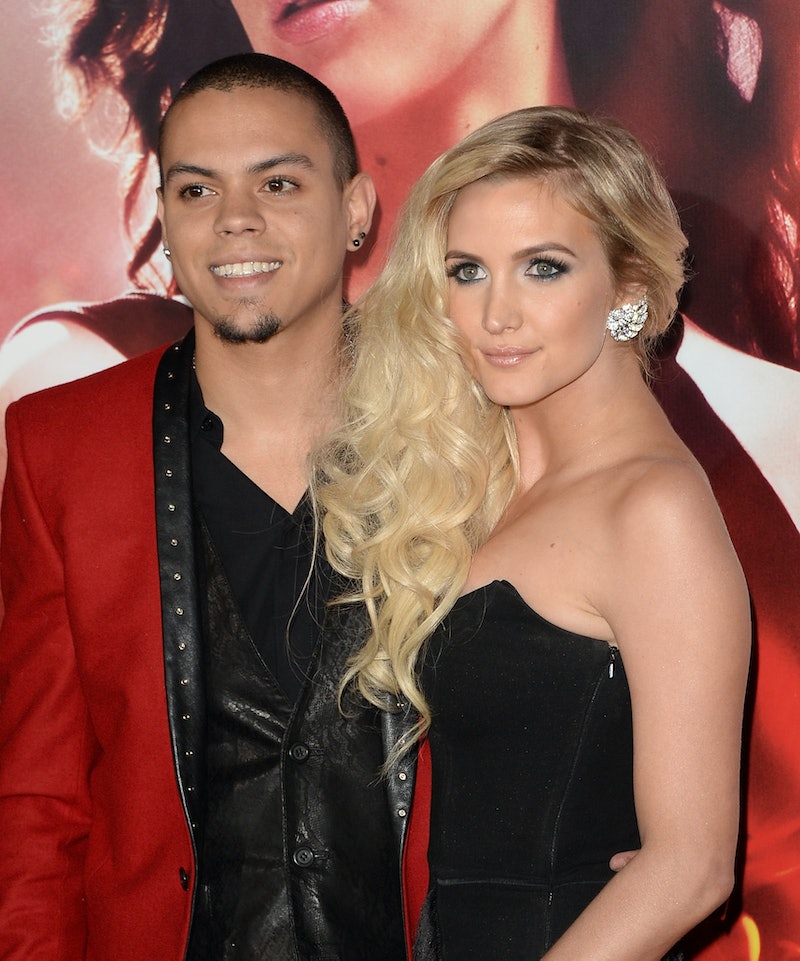 Is it just me or have there been an insane amount of celebrity pregnancies this year? I mean, Hollywood baby news is a continuous thing, but it just seems like this year everyone is full of baby fever. (Maybe it's something in the L.A. water?) Anyway! The reason I mention it is because Ashlee Simpson is pregnant, according to an E! News exclusive report, marking her first child with hubby Evan Ross. The happy couple only just recently tied the knot a few months back, so this will serve as an extra layer of excitement to their newlywed bliss. And while I know the due date is still quite a ways off in the future, it's never too early to be thinking about different baby names Simpson and Ross may choose.

Celebrities are known for naming their kids after some pretty interesting things, whether that be edible objects (Apple) or even an actual number (Seven). So I'm very curious to see what this dynamic Hollywood duo come up with. Simpson already shares a six-year-old son Bronx from her previous marriage with Fall Out Boy star Pete Wentz. But given that this child is with her new man, she'll probably defer from going with another NYC borough name. However, it's important to remember that Bronx's middle name is Mowgli after The Jungle Book character, so it's clear Simpson isn't afraid to use pop culture as inspiration. So what if this time she chooses a name based off of her previous song titles?

Which ones, you may ask? I just happen to have a few suggestions…

Not only does this work for either a boy or a girl name, but it's also unique enough without going completely overboard. Plus, he or she would be named after one of the greatest Homeward Bound characters of all time. So I would consider that an added bonus affiliation.

This one I'll admit is a little out there, especially since it reminds me more of a Clay Aiken song than anything else, but I've definitely heard weirder names than this, so I guess that's something. Maybe the kid would eventually grow to be a magician and go on the road with Neil Patrick Harris. And if that doesn't have all the makings for a great future then I don't know what does.

This one is… interesting. I gotta be honest, it's not my favorite, but depending on how close of a connection Simpson feels to the song, she may opt to go this way (if it's a girl, obvs.). If anything it'll be super easy to spell, so kindergarten should be a breeze.

This one is for two very important reasons. For starters, it's a great song of Simpson's that reminds me of my high school days. Then there's the fact that the word "love" also shows up in a very popular Diana Ross song "Stop! In The Name of Love." And since Ross will be the baby's grandmother, Simpson could draw inspiration from both of these song titles. Is it different? Absolutely. But ya gotta admit, it's also kind of sweet. Think it over, girl.

More like this
Kanye West Apologizes To Kim K "For Any Stress I Have Caused" In Rare Interview
By Jake Viswanath
Adam Levine Denies Having An Affair — But Admits He “Crossed The Line”
By Jake Viswanath and Radhika Menon
Kesha Is Down To Be The Next Bachelorette
By Jake Viswanath
Everything To Know About Taylor Swift’s 10th Studio Album, 'Midnights'
By Grace Wehniainen and Jake Viswanath
Get Even More From Bustle — Sign Up For The Newsletter