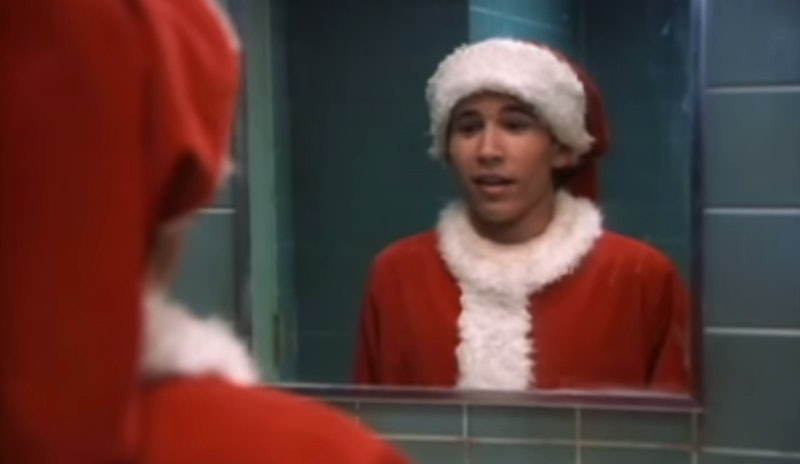 There are few things about the holiday season that I look forward to more than Christmas movies. Maybe hot chocolate (because everyone knows you can have unlimited hot chocolate during the holidays, duh) and easily available peppermint candy canes rank higher, but other than that, it's totally Christmas movies. But, with so many out there, it can be hard to pick a favorite — especially as I'm sure each and every one of us loved one dearly when we were growing up. So let me just make that decision for everyone right now: Let's be real, guys, it was totally Disney's 1998 Jonathan Taylor Thomas holiday comedy I'll Be Home For Christmas .

Why I'll Be Home For Christmas and not a more classically beloved film like It's a Wonderful Life or something? Firstly it starred Jonathan Taylor Thomas, who basically embodies the late '90s, and — as someone who grew up in the '90s — it's totally nostalgic not only to see him in a starring role, but alongside a totally baby-faced Jessica Biel, Lauren Maltby pre-Zenon (and pre-Ph.D, who'da thought!), and the dude who played Office Space 's boss from hell, Gary Cole. Secondly, despite negative reviews from critics who clearly hate happiness, it's a genuinely fun, light-hearted movie with nothing but good intentions. How can you dislike that?

In fact, there are a lot of reasons why we all loved this film so much when we were growing up:

Jonathan Taylor Thomas is in it

Like I said earlier: Jonathan Taylor Thomas, '90s icon, stars in this movie as Jake. So, the fact that this is a movie about him cracking jokes and traveling across the country? It makes I'll Be Home For Christmas literally a relic in time.

Jessica Biel's character is a Fiona Apple-loving, E.E. Cummings-reading feminist who does not let any man take her for granted

For a movie set in the '90s, Jessica Biel's character, Allie, is surprisingly feminist! I mean, she loves Fiona Apple, which was totally the role model of any budding feminist back in the '90s (she's still my role model), she's intelligent, values literature, deep conversation, politics, and she takes absolutely no crap from any man, whether a boyfriend or an annoying classmate. '90s cinema didn't always have the strongest female role models too, so Allie was definitely a stand-out.

It's a genuinely happy, light-hearted Christmas movie that's just meant to be fun

This is the basis of most Christmas movies, sure, but often times, the outcome just ends up cheesier than it does heartwarming. And yes, I'll Be Home For Christmas has its cheesy moments, but they're all outweighed by just how genuine and well-intentioned the movie is. There's no heavy subject matter, no drama, nothing — it's just about a spoiled, rich college kid who learns that life isn't about superficial possessions, it's about family, and happiness. How can you hate on that, seriously?

It has a good message

Christmas isn't about the presents, it's about family. This is a lesson that Jake learns when he tries to rush home from college for Christmas when his father bribes him by offering to give him the family's Porsche. By the end of the film, Jake actually turns down the car, and promises to come home for Christmas more often, because he wants to spend quality time with his family — something that Jake in the beginning of the film never would have done. The mere fact that I'll Be Home For Christmas, a movie geared at kids and teens who probably care more about Christmas presents than anything else, has this message makes it an automatic win.

It's a surprisingly smart movie

Perhaps others will disagree with me on this, but I fully maintain that I'll Be Home For Christmas is one of the smartest movies Disney has ever made. Not for the structure of its plot, because yes, that's pretty light-hearted and not meant to be taken seriously — but certain lines and references peppered throughout the film indicate a sophistication that you don't often see in movies geared towards Disney's normal demographic. There's everything I mentioned before about Jessica Biel's character Allie, for starters — references to E.E. Cummings and quotes about feminism and even consent only cement my point.

So, anyone up for a rewatch now?