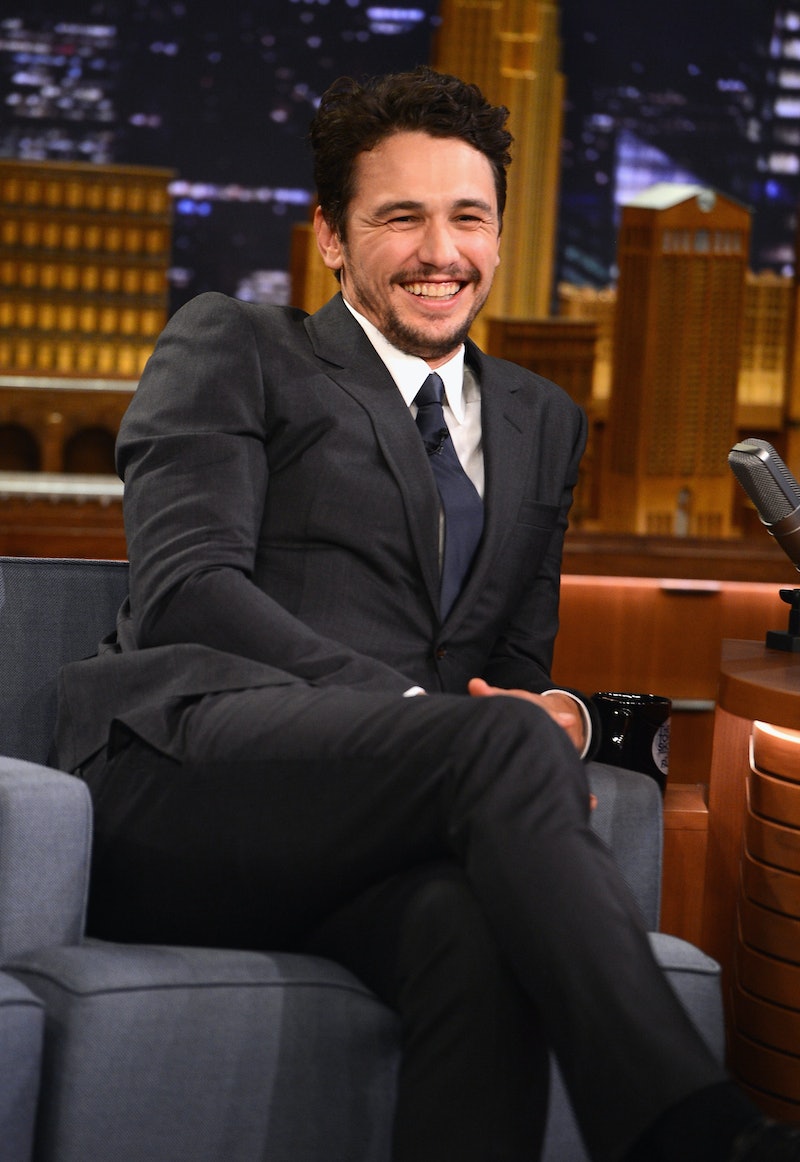 While scrolling through Instagram on Thursday, I found a photo that left me puzzled. James Franco posted not one, but two photos with Lady Gaga. Granted, they're both great entertainers (in my opinion anyway), but they seem to have nothing in common besides that. According to The Mirror, James Franco and Lady Gaga both attended a holiday party on Wednesday night hosted by Klaus Biesenbach, the chief curator at the Museum of Modern Art in New York. Ahh, so that's the connection! I guess a little holiday fun was a good way for Franco to take his mind off of the whole Sony hack dilemma that led to the cancellation of his movie The Interview .

Although I approve of this new friendship (who wouldn't?), it still feels pretty random. The caption of their selfie says, "Happy Hanukkah ❤️ @ladygaga + me." Besides bonding over the Festival of Lights, I've decided to imagine what these two could've possibly talked about as they hung out at the party. Maybe Gaga provided some comfort about his movie getting cancelled, or they could've talked about different stuff entirely — like whether she'll let him direct her next music video. Hey, "Bound 3" was a success in its own right! And she's a big fan of pushing the envelope.

And here's a group shot, which includes Biesenbach and Courtney Love:

Now that you've seen the proof, I've decided to compile a list of potential conversation topics between Lady Gaga and James Franco. If they didn't discuss these things at the party, at least they've got plenty to talk about next time!

Their Time at NYU

While Franco taught a film class at the school, Gaga attended New York University as an undergrad. They easily could've bond over their good times at that college! Even though Lady Gaga dropped out of NYU, she explained in a past interview,

I loved NYU, but I thought I could teach myself about art better than the school could. I really felt New York was my teacher and that I needed to bite the bullet and go it alone.

Hmm, does this mean Franco could convince her to become a professor too? She surely has the experience now and plenty of wisdom to share. I'd sign up for that class ASAP!

The Best Place to Get Pizza in the City

Hey, as two New Yorkers, I'm sure they have their opinions about where to grab a great slice. After some disagreement about where to get the best pepperoni, Gaga probably extended a personal invite for Franco to visit her father's Italian restaurant! They'd happily make plans to grab pasta together in the near future. Oh, and fun fact: James Franco starred in a Pizza Hut commercial years ago! So he must be a big pizza person, right?

Casting Gaga in a Movie

Why didn't Lady Gaga have a cameo in This Is The End like every other celebrity? I bet she called Franco out for leaving her out. But afterward, he could've made amends by offering to let her star in a future flick. She would happily accept and be a great addition to any cast. After all, her music videos are always like mini movies in themselves.

James Franco is the king of parodies! I'm sure he and Gaga could create something hilarious that would instantly go viral. A remake of "Applause" is probably in the works as we speak.

More like this
Everything You Need To Know About ‘Black Panther: Wakanda Forever’
By Bustle Editors
Christian Bale Sang With Taylor Swift & His Daughter Can't Believe It
By Radhika Menon
Dan Levy Appears In The Latest Teaser For The Weeknd's HBO Series, 'The Idol'
By Jake Viswanath
Kesha Is Down To Be The Next Bachelorette
By Jake Viswanath
Get Even More From Bustle — Sign Up For The Newsletter