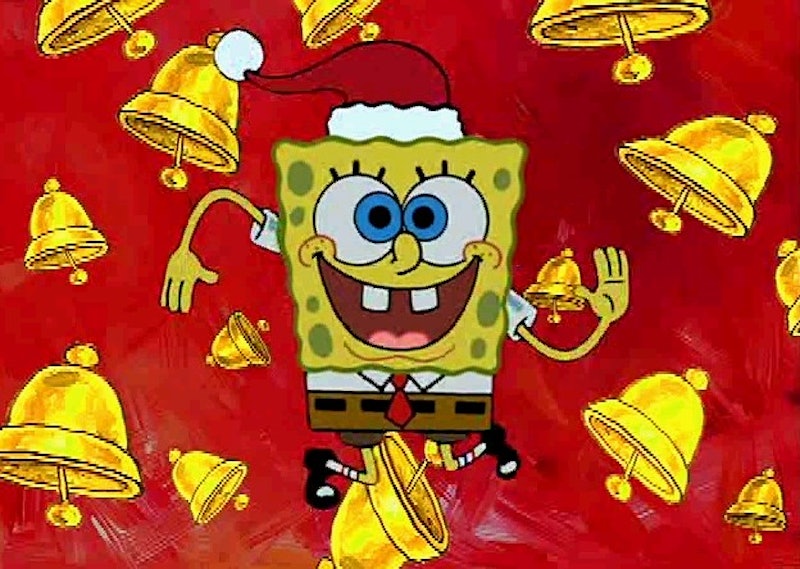 Sad announcement, friends: the new Spongebob Christmas special sucks. I watched the 2012 Rankin/Bass-rip-off recently, so you don't have to, and I have to say, it's a colorless sequel to the original holiday special, "Christmas Who?" Why? Among many reasons, it's Christmas song pales in comparison to "Very First Christmas to Me." And what's a Christmas episode with a memorable Christmas song?

Some of my favorite memories of the night before christmas morning (or Christmas Eve Day? I don't know) is watching endless stream of Nick toons, Cartoon Network and the occasional vintage Hanna-Barbara special. It was seasonal binge watching in an age before it was socially acceptable to binge watch. And it was wonderful. But now, Nickelodeon is populated with gross live-action shows, and I don't know what Cartoon Network is doing. If I want to delve into the holiday shows-and songs-of my youth, I have to retreat to Netflix. Or, in desperate scenarios, YouTube.

Well, grab your footie pajamas, your Cap'n Crunch Christmas cereal, and all aboard the nostalgia! I dug up some of the best musical moments from cartoon Christmases past, so you can properly spend the day jamming out to the REAL carols that defined our youth.

1. Fairly Oddparents, "I Wish Every Day Could Be Christmas"

In retrospect, Timmy Turner was kind of a dick, and not the brightest crayon in the box. So when he wishes everyday to to be Christmas, obviously it backfires horribly. However, it does provide us with a very memorable holiday song, which both lampoons Timmy's inability to get a girlfriend, and Mr. Turner's insatiable lust for egg nog.

One of the wonderful things about Dexter, boy genius, is that he had an unexplained Einstein-esque accent. Kind of Russian with a twist, you know? Pair that accent with an awkward rap about how Santa isn't real, and you have this adorable holiday vignette.

As I mentioned earlier, the original Spongebob holiday special is one of my must-watch shorts of the season. That's largely, though not entirely, because of "Very First Christmas to Me." It is in every way a perfectly silly—yet still musically solid—Christmas song. And there is nothing, nothing on Earth funnier than Spongebob's bridge of wiggly "La la la la's," especially when he randomly pops up in Squidward's doorway mid "la."

4. Ren & Stimpy, "It's A Wizzleteats Kind of Christmas"

Ren & Stimpy is the ultimate in underground '90s cartoons, and their second holiday special "A Scooter for Yakmas" (ironically their last episode on Nickelodeon) best shows that. In short, it involves shaving a Yak and the return of Stinky Wizzleteats. You may know him from his previous work, the iconic "Happy Happy, Joy Joy." And if this isn't enough, keep in mind that there's a whole beautiful Ren & Stimpy Christmas album out there, probably on the darkest corners of Ebay.

5. The Flintstones, "Dino the Dinosaur"

To make things a little lighter, here's a classic from a cartoon that dates back to when my parents were children. Although, to be fair, my brother and I were raised in that brief Flintstones revival of the early '90s. Remember that movie with Kyle MacLachlan and Liz Taylor and Halle Berry? Yeah. Anyway, "Dino the Dinosaur" is in the vein of "Frosty the Snowman," and it's absolutely precious.

I try to make a point to watch the Invader Zim Christmas episode every year, because the premise is just so wonderful: Zim, under the guise of Santa, nearly manages to become overlord of the entire world, and he even comes with his own propaganda song! Best part? The lyrics are there, so you can sing along too! God bless Jhonen Vasquez.

Technicall, who KNOWS when this version of "Jingle Bells" came into existence. I mean, you can hear Bart Simpson sing it as early as 1989. But the best version, hands down, is when the Joker belts it while breaking out of Arkham Asylum. Yes, he may be a ruthless psychopath, but at least he's festive.

More like this
20 Photos Of The 'Hocus Pocus' Cast Then & Now
By Radhika Menon
12 ’90s Movie References You Missed In 'Do Revenge'
By Radhika Menon
24 Years Ago, 'Friends' Dropped Its Most Underrated Ross & Rachel Episode
By Grace Wehniainen
The Spice Girls Just Dropped A Brand New Music Video
By Sam Ramsden
Get Even More From Bustle — Sign Up For The Newsletter