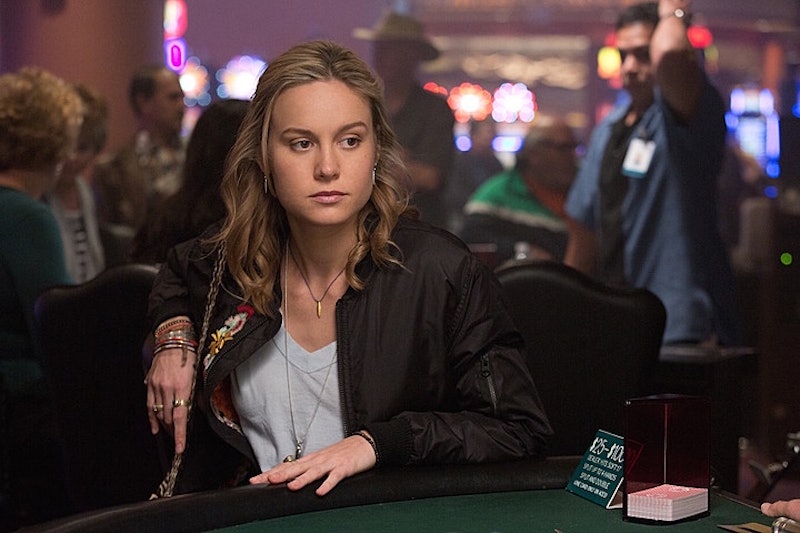 If you're familiar with Brie Larson's body of work, you've probably noticed that it's hard to find any connections between her roles — besides the actress herself. From a rebellious teen on United States of Tara to a high school student caught up in the hijinks of 21 Jump Street to the leader of a group home struggling with her own issues in the highly lauded Short Term 12, Larson seamlessly transitions between genres, as well as independent and major studio films. The 25-year-old's latest venture is The Gambler , in which Larson plays Amy Phillips, a character who's not quite a love interest, which in an interview with Bustle, Larson says is exactly what drew her to the role.

Based on the 1974 film of the same name, The Gambler follows Mark Wahlberg's Jim Bennett, a college professor whose reckless gambling lands him in serious danger from multiple foes. Amy is one of Jim's students and catches his eye because of both her immense talent as a writer and connection to his "other life" — she works as a waitress at the underground casino he frequents. Though there is a romantic connection between the two, Larson explains in our interview that she sees Amy as "more of a state of mind" or "place to be" than strictly a love interest.

That might not have been the case were it not for Larson's casting, as director Rupert Wyatt told Bustle's Anna Klassen that Amy was an under-written character, who is enhanced by the actress' performance. During our interview, it becomes clear why Larson has turned Amy into a fuller character — she's a feminist whose outlook has been shaped by film. She wants to see more dynamic female characters, so she plays them, and in this case, creates some of those complexities herself.

The Gambler will be released in theaters on Dec. 19. See what else Larson had to say about the film and feminism in our interview below.