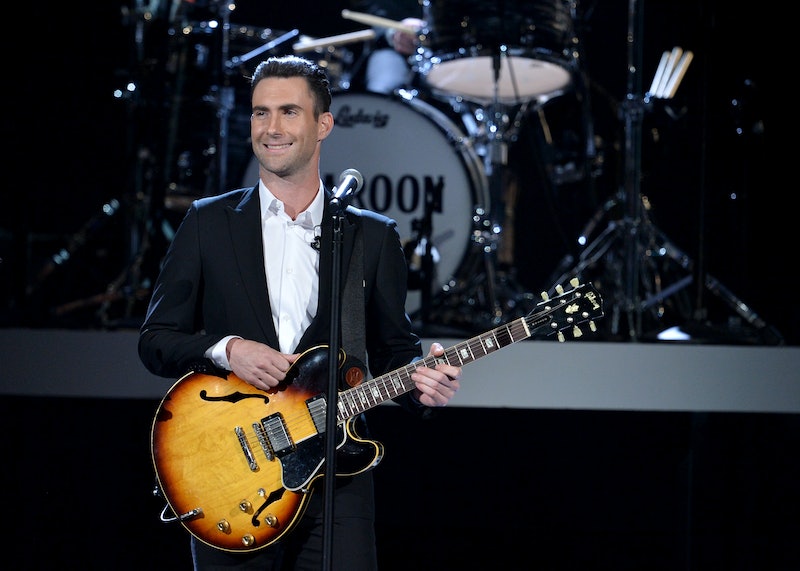 On Thursday night, People honored many entertainers in Hollywood who have achieved greatness in 2014. In addition to handing out awards, the magazine also invited Maroon 5 to perform during the People Magazine Awards. If there was any thought in your head that these guys weren't rock stars, then I invite you to re-watch their performance of "Animals" on Thursday. Whether you like Adam Levine, or love Adam Levine, or — just to be fair — can't stand Adam Levine, you can't deny that he and his fellow band members know how to perform live.

First, it's important to note that Levine dressed for the part. He wore maroon pants, because Maroon 5. Gotta love a guy that commits to his craft, right? "Animals," Maroon 5's slightly disturbing, yet catchy song — I'm sorry, I just can't get the amount of blood in the music video out of my head — is the second single off of the band's album V. If you're not familiar with the music video, and aren't squeamish regarding blood, take a look at the video which has over 75 million views.

At the People Magazine Awards, Maroon 5 proved why they can get away with such a crazy video by absolutely killing their performance. Not only was the song performed without a note out of place — especially for a live performance, as we know those don't go well sometimes — but Levine was dancing, and rocking, and lifted the mic stand over his head in a fit of adrenaline (maybe), because why the hell not lift the mic over your head? The only thing missing was a guitar smash, but he'll grow into that type of musical display in time.

"Animals" is currently number 8 on Billboard's Top 100, and has sold over one million copies as of Nov. 20.