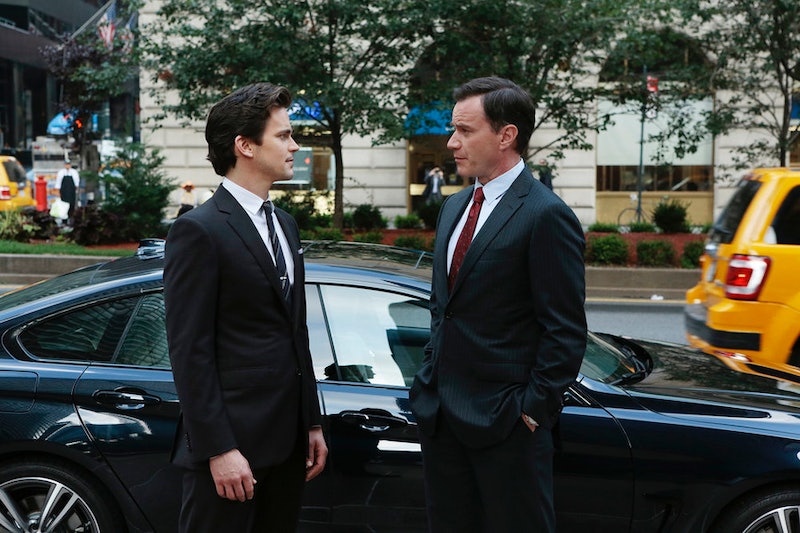 Well, that ending is not going to piss anyone off. The USA Network aired the White Collar series finale on Thursday night and wrapped up pretty much everything in a nice, tidy bow... Or at least a bow Neal Caffrey would make as it was shown in the last few minutes of the episode that despite everyone thinking he had been killed, Neal actually faked his death in an elaborate plan and relocated to Paris, France, for a chance at freedom and continued use of his suits. But while that ending seemed rather obvious and fitting for the con man we've all grown to love, the best part of the finale was that despite Neal's friend and original arresting agent Peter Burke finding out that Neal was actually still alive, he didn't go after him. Instead he allowed his felon friend to roam free despite possibly realizing that Neal is planning to pull a huge heist at the Louvre. Yes, really!

The Louvre heist idea was actually confirmed by White Collar lord and creator Jeff Eastin during a recent interview which would suggest that despite Neal finding a new family with Peter and his wife, he will never be able to run away from his true nature. But before we get deep into Neal Caffrey's psyche, let's recap the events of the finale, shall we?

The plan to arrest the nefarious group the Pink Panthers (how can anyone believe that name to be a serious threat?) is underway as Peter has infiltrated the group alongside Neal and the evil Keller to pull a heist worth more than $500 million. The heist, and the FBI tracking and screwing with it, goes perfectly as the FBI is able to arrest all of the Panthers and put them away for life. However, before Peter can grant Neal his freedom, Keller gets into his head and suggests they escape and take their cut of the money.

Neal, because he's super human at planning ahead, knows Keller is going to try and take all of the money and run so he plants a gun beforehand with Mozzie, who's holding the money for the two criminals underground. But Keller and Neal get into a scuffle before Peter can find Neal by his tracker and Keller shoots Neal in the chest before attempting to escape and getting a bullet in the head for his misdeeds. Case closed on that jerk.

Unfortunately, Neal looked to be dying as the paramedics got ready to take him to the hospital and when Peter catches up, Neal tells him he is his best friend. Pretty sure most fans started sobbing right about here. Mozzie and Peter find out from the doctors that Neal is dead as his body is lying like a slab in a body bag in the morgue. Here the scene gets a bit cheesy as Mozzie tries to convince himself and Peter that Neal is still alive. Less is more, Jeff Eastin. Less talking is more sometimes.

Then suddenly, a year goes by and we see Peter has turned down a job offer in DC and is upholding his deal with his wife to be there for his son, aptly named Neal by the way. Mozzie is back to hustling people in card games and the two reminisce about their fallen friend. Mozzie later comes over for dinner and a wine cork sets Peter off into a thought: What is Neal really did set up a plan to fake his own death? It's Neal Caffrey, the answer is clearly yes.

As Peter goes through Neal's storage locker, he notices a Queen of Hearts card, symbolizing Neal and Mozzie's friendship which began as a con. He also notices other obvious faked death clues that I don't fully understand because I'm not an FBI agent. But then he comes across a newspaper with a heading about the Louvre hiring more security. Peter smiles and realizes his friend is still alive and still as Neal as ever. I'm not surprised that Peter's sense of black and white morality has been grayed thanks to Neal but I am surprised he doesn't at least end with attempting to visit or see his friend one last time. I guess he really does just want the guy to be free for the first time ever. Live and steal on Neal Caffrey, you beautiful man. Live and steal on.