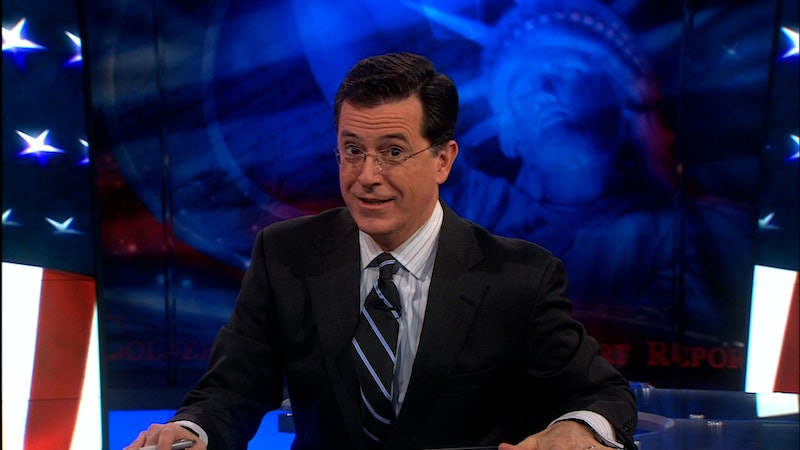 Every talk show icon has his top tier shtick: Johnny Carson had “Carnac the Magnificent,” Conan O’Brien had “The Year 2000,” David Letterman has “Top Ten,” and his forthcoming Late Show replacement Stephen Colbert has, for nine wonderful years, had “The Word” on The Colbert Report . On Thursday's series finale of The Colbert Report, Stephen delivered his final Word — a disyllabic embodiment of the legacy he is happy to leave behind: Sameness.

Yes, Colbert bids farewell to his trademark bit by celebrating nine straight years of making sure the world would be left exactly the way he found it (the perfect summation of everything his hyper-conservative, anti-progress character would stand for). Of course, while Colbert prides himself on making no substantial imprint on American culture, we all know this assessment to be miles from the truth.

Ironically enough, Colbert also took it upon himself to commemorate his many accomplishments during this ode to the status quo… employing an illogic that only Stephen Colbert could hope to keep. In his final “Word,” Colbert looked back upon his many great moments on the show: his presidential run, the Rally to Restore Fear, and so many great achievements that Colbert graciously credited to America... deeming himself simply the party to get paid for them.

He took the opportunity to mock Walter Cronkite, celebrate Bud Light Lime, and throw one last truthiness in there.

It was quite a word.

More like this
Demi Lovato Might Stop Touring Forever Due To Being "So F*cking Sick"
By Jake Viswanath
Mel C Wants You To Know That Margaret Thatcher Wasn’t A Spice Girl
By Darshita Goyal
Here’s Everything You Need To Know About Operation London Bridge
By Bustle UK
Paul Mescal, Man Of Mystery
By Samantha Leach and Heather Hazzan
Get Even More From Bustle — Sign Up For The Newsletter