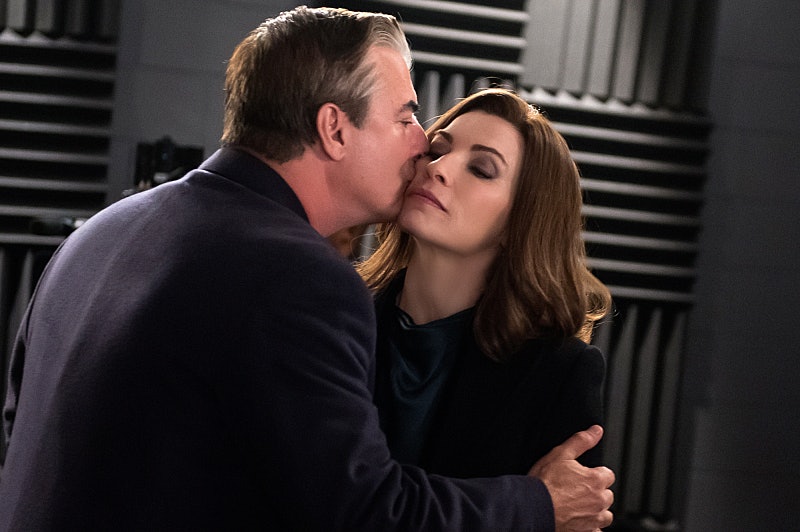 At its best, The Good Wife excels at exploring the contradictory desires of modern womanhood, delving into the gulf between who you have been and who you want to become, through Alicia Florrick. From ruminating on self sacrifice in romantic relationships to competitive workplace dynamics, there is one question fueling everything on the show. Is it possible to have control over your life and happiness? As Alicia boldly campaigns for political office, she struggles with her empty marriage-of-convenience with Peter and time and again we're begged to wonder: Will Peter & Alicia ever get back together on The Good Wife, despite all the reasons they shouldn't?

I'm calling it now: That 'ship is sailing away once and for all.

Where Does Peter Stand with Alicia Now?

In the sixth season's episode, "Sticky Content", we're given even more evidence that Peter is a lying scumbag that Alicia needs to divorce, as if we needed any. We also see flashes of resentment and anger toward Romona, Peter's legal counsel/longtime family friend turned mistress, that Alicia realized her husband was sleeping with. Even though Alicia and Peter are under an agreement to stay married not out of love but because of its advantageous benefits, Peter still is in the wrong. Sleeping with Romona not only is emotionally messy and can easily backfire in his face, it shows a flagrant disregard for Alicia. Seeing Peter and Romona later in the episode in the back of car acting like their love affair was unavoidable and calling yourself a bad person absolves you of your sins was just the cherry on top of the crap sundae. What the hell will it take for Alicia to divorce Peter?

For the record,this was my reaction to everything that went down:

While it pains me to see this happen, this mess did give us a great line from Alicia, "Zip up your pants, shut your mouth, and stop banging the help." One theory that has been going around is that Peter is the father to Romona's daughter Lauren, who was the intern who didn't like to wear underwear from earlier in the season. This would explain Peter's favoritism and the curious wording with which he responded to Alicia's questions in the video. It is implied that Peter has been involved with Romona previously. This means that Peter's cheating extends long before the scandal that set off the show in Season 1. While Alicia mentions she won't stand by him again, I think she shouldn't be standing by him now. This whole development brings out the romantic 'shipper in me that really wanted her to have either a happily-ever-after with Will or be truly single.

Could Peter Be Connected to Romona More Than Alicia Knows?

If the theory that Peter is the father of Romona's daughter does turn out to be true this provides a perfect opportunity for Alicia to finally divorce Peter. He's dead weight. He can never get reelected without her by his side. I honestly think Alicia had an opportunity to divorce Peter before campaigning. Her brand is stronger than his and can survive a divorce. Does being married to Peter have its benefits? Yes, but Alicia has strong connections of her own. At this point what I see happening is Alicia finding out how extensive Peter's relationship with Romona is and how it may leak. She makes the jump by filing for divorce and getting ahead of the story. Alicia may lose the race for State's Attorney but I think this storyline operates to show how she's trying to branch out and further gain control over her public image.

Where Does Alicia Go From Here?

I think the power the showrunners are referring to isn't political or even social, but the rare personal power to define your public and private selves. This may explain Alicia's reluctance to divorce Peter and have any semblance of a romantic life. Such a change means a loss of power, another reinvention. But it is a change she and the show needs.

This season of The Good Wife has received negative push back from fans. While part of that is about how disjointed the lives of various characters have become from one another to the point that it feels like they are operating in distinct shows. I think the negative response is primarily rooted in the fact we as fans wrote a clear arc for Alicia, from scorned wife to independent and badass lawyer.

The show upended many endings fans wrote for Alicia with the death of Will and Alicia's decision to stay married to Peter. But, I have a sneaking suspicion (or maybe blind faith) that Alicia will divorce Peter when The Good Wife returns Jan 4.

More like this
Shonda Rhimes' Net Worth Makes Her One Of The Wealthiest People In TV History
By Hugh McIntyre
The Best 'Grey's Anatomy' Intern Moments, From MAGIC to Glasses
By Grace Wehniainen
Kidnapping Victim Jan Broberg Is Prepared For A Friend Of The Family Criticism
By Brad Witter
'The White Lotus' Season 2 Trailer Teases Multiple Affairs & Another Dead Body
By Bustle Editors
Get Even More From Bustle — Sign Up For The Newsletter