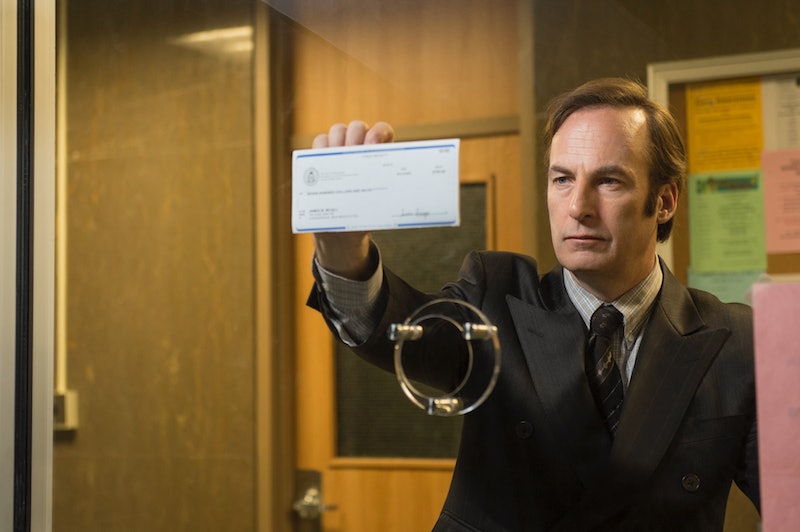 Can you believe it? Over a year after Breaking Bad went off the air, its much-heralded spin-off series Better Call Saul is finally, finally coming to the small screen. Yep, when Better Call Saul starts on AMC, it will hit the ground running with a two-episode premiere, set to air on Monday, February 8 and Tuesday, February 9 (both nights at 10 p.m. ET).

Things are looking very cool — we were treated to our first glimpse of the Better Call Saul promo trailer just last month, and details have been slowly trickling in since summer. Apparently the show will take us on the journey of how a lawyer named Jimmy McGill became the Saul Goodman we all know and love — basically, there's a lot to look forward to (such as Vince Gilligan coming back to TV, for goodness' sakes). As its premiere inches ever-closer, I decided to make a list to celebrate — so, without further ado, here are a few things I want — nay, need — from the upcoming series:

It's (unfortunately) unlikely that we'll be seeing our old friends Walt and Jesse again, but what about Gus? I mean, he must have crossed paths with Saul at some point before the events of Breaking Bad, right?

Saul's so shady; he has to have been on Hank's DEA radar. Wouldn't you just love to see Hank swagger his way in to bust Saul on something? I can just picture Saul in a wild panic, while Mike has to come in and save the day.

She factored in heavily as a plot point in BB, but we definitely did not get to see enough of their highly-adorable relationship.

Come on. This dude was hilarious — he's got to come back!

Out of all the characters on BB, she's actually among one of the ones who would make the most sense as a character on Better Call Saul, given her regular dealings with Mike. That said, it would sure be a pity to ruin the memory of her pitch-perfect death-by-ricin, wouldn't it?

Breaking Bad was always a drama that did dark comedy superlatively well, but if you harken back to Vince Gilligan's days writing for The X-Files, you'll really see just how goofy he could be. I mean, "Small Potatoes"? "Bad Blood"? Iconic.

Was there anything better than watching Saul unravel? Granted, without Walter White as a client, things may have been a touch more tame around his Constitution-covered office, but not much. Here's to all the Saul freak-outs to come!

OK, so if we're requesting more Saul freak-outs, I think we've got to counter that with a healthy dose of Mike's stoicism. Their opposites attract-type relationship is sure to be a great driving force for the show.

So that's what I'm looking forward to. You know, I have a lot of requests (and hopes and dreams) for the show, but really I'm just ecstatic to see my long lost friends back on TV again: Mark your calendars, because Better Call Saul is right around the corner, finally.

More like this
These 'Bridgerton' Continuity Errors Are Almost As Infuriating As The 'GoT' Coffee Cup
By Jake Viswanath and Meguire Hennes
Paul Mescal, Man Of Mystery
By Samantha Leach and Heather Hazzan
Mike Flanagan Teases 'The Midnight Club' In This Exclusive, Creepy Clip
By Grace Wehniainen
Caleb McLaughlin Details Racism From 'Stranger Things' Fans
By Radhika Menon
Get Even More From Bustle — Sign Up For The Newsletter