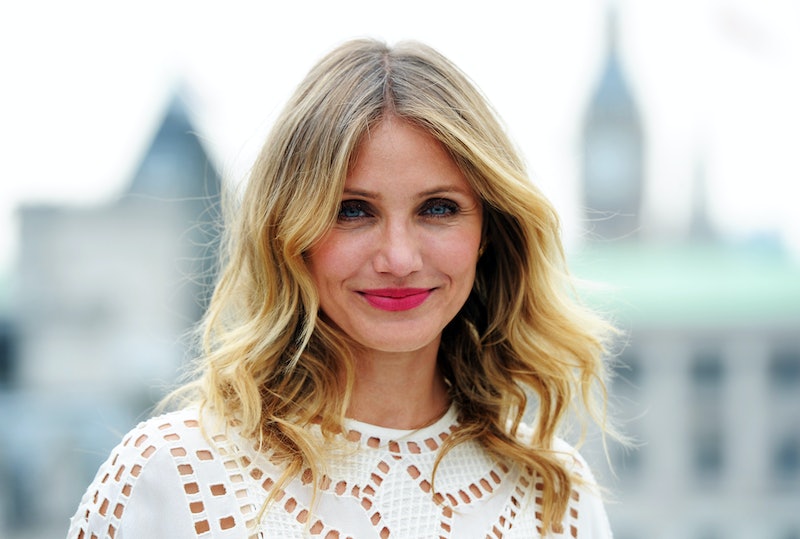 I don't know about you, but the relationship between Cameron Diaz and Benji Madden is one of those celebrity hook-ups that I wasn't expecting but that I ended up finding, well, unexpectedly cute. In fact, no one was expecting Diaz and Madden as a couple when rumors began to fly of their union, but somehow the couple has made it work — and made it work well — for an entire seven months. In fact, they're making it work so well that, according to US Weekly, Diaz and Madden are reportedly engaged. There's no word on whether it's a long engagement or if we should expect Diaz to quietly change her name to Cameron Diaz-Madden next week, but this news is more surprising than their initial coupling was.

The thing is, Diaz doesn't want to get married. Like, she really doesn't want to get married. And I'm not even saying that she hates the institution or is taking a political stand against it until everyone can do it or whatever reason people give for not getting married. She's just been documented in just about every interview going back to the '90s as saying that she has zero interest in that whole marriage thing. "It’s hard to say. It just wasn’t the thing I was drawn to. I certainly didn’t want it it in my 20s. Or my 30s," she said in an Esquire interview in 2012. Any Google search of Diaz and marriage will turn up many more similar quotes.

In fact, rumors of a potential wedding between Madden and Diaz have been following them since about five months into their relationship, if not earlier, and Diaz has so far managed to side-step marriages with men that she's been with much longer than Madden. That, to me, makes it highly unlikely that the pair are engaged no matter what US Weekly's "multiple sources" confirm. To my knowledge, they still haven't entirely confirmed that they're even together. Going against decades of anti-marriage chatter to get engaged to someone she hasn't fully admitted she's dating just doesn't seem like Diaz's style.

However, if the two of them are engaged, then I have to say that it would be kind of adorable. As the former wannabe emo punk that used to blast Good Charlotte on her way to school, a small part of me has always wanted to see the Madden brothers as happy as they used to make me. And, well, Diaz being happy is always a bonus to any day. While I wouldn't put too much stock in the rumors until we get an official statement from either one of these stars, it's still nice to dream of a world of Diaz-Maddens.