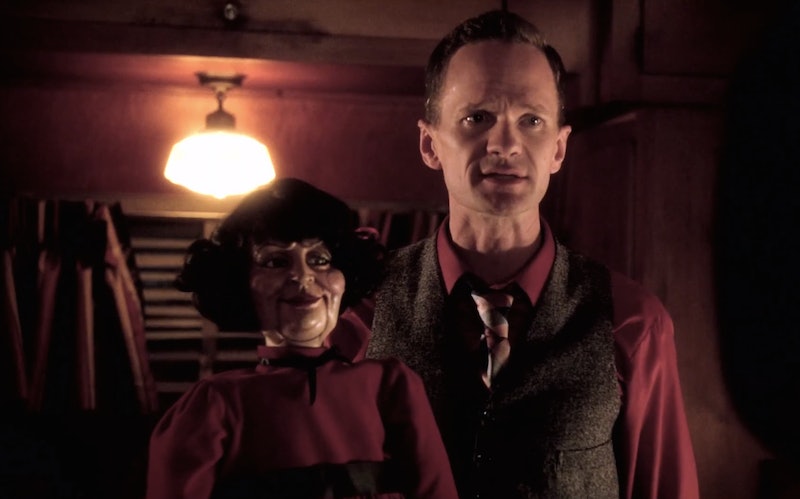 I'm going to make a confession to the world at this point. I have never seen most of the Toy Story movies. In fact, I didn't even see the first one all the way through. Toy Story came out after I had snuck up late to see Child's Play and, let me tell you, there was nothing cute about dolls coming alive to a 5 year old after watching that horror film. Creepy dolls are just not my thing, so Neil Patrick Harris' appearance in American Horror Story: Freak Show is already terrifying me despite the fact that we got our first look in a midseason promo that was only about a minute long. Being on the Ryan Murphy vehicle has been a dream of the actor's — and his husband David Burtka will be appearing on AHS as well — but NPH seems more like he's trying to give me nightmares with this.

Harris will be playing Chester, a "chameleon salesman" who is also the new owner of the Freak Show. Over the course of the clip, he puts on a terrifying and bloody magic act, he flirts with Dot and Bette (the conjoined twins that everyone is going absolutely mad for) and he seems to be making a broken-hearted Dandy uncomfortable. But, more importantly, he's got the world's creepiest puppet attached to his hand and claims the "puppet" relaxes him. No. Nope. I'm done. Goodbye. Twisty the Clown ain't got nothing on creepy puppets, for me. Clowns you can run from. Puppets you never even see coming until it's too late.

Seriously, though, this glimpse at the color, flavor, and magic NPH is going to bring to the second half of AHS: Freak Show should be all the incentive you need to tune in when the show returns in January. Twisty might be gone, but there's way more going on in Jupiter than just one psychotic clown.

Check out your first look below.

More like this
Netflix Reveals First Look At Wednesday In The 'Addams Family' Spinoff Series
By Bustle Editors
Kenan & Kel Just Reunited At The 2022 Emmys & Twitter Is Overjoyed
By Grace Wehniainen
These 25 International Horror Movies On Netflix Prove Fear Is A Universal Language
By Bustle Editors
What Does Nancy Jo Sales Think Of 'The Real Bling Ring'?
By Arya Roshanian
Get Even More From Bustle — Sign Up For The Newsletter