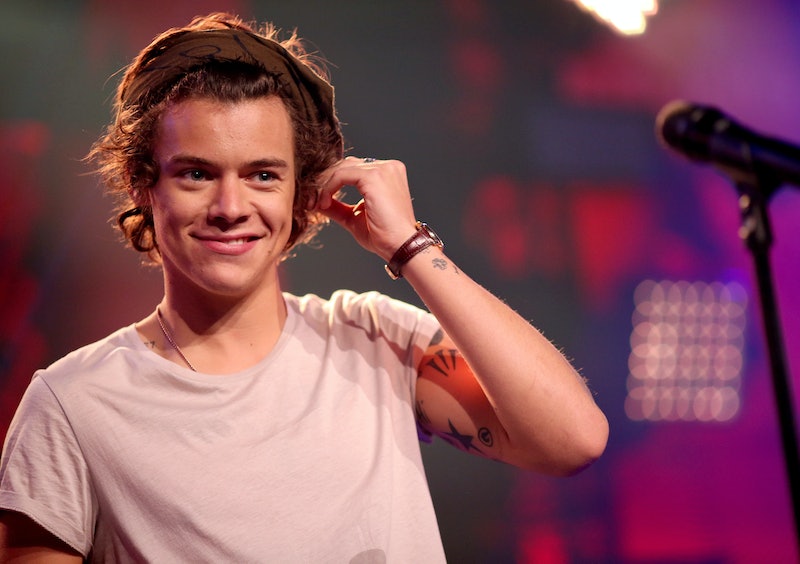 Poor Harry Styles. Ironically after the partial ode to him that was released in the form of Taylor Swift's 1989, it appears that she's not the only one who probably wishes everyone would stop assuming that Swift is dating her friends. While Styles has been reportedly single for quite some time now, he appears to have given his entire Directioner fanbase a heart attack due to his insensitive actions from Thursday. What were those actions, you ask? Styles hung out with Nadine Leopold in New York City. They got Starbucks together. She might have been wearing his coat. Are they dating? Who cares! The fandom is in tears.

For those who are interested in the truth, Leopold and Styles are not, in fact, dating. I don't have to know them personally to know that. Leopold is an Austrian model who also reportedly has a boyfriend, so I don't think a high-profile NYC date with Styles is on her to-do list. (Then again, some Directioners are reporting themselves that Leopold and her boyfriend broke up, so who knows what to believe?) As for Styles himself, well, Leopold is one of many female friends that the 1D singer has in his life and that he has been seen with over the months he's been embracing the single life. Since all they really did was stand next to each other and walk around all day — with a third male present — I think it's a little unfair to dissolve into a pool of tears just yet. Not that this has stopped anyone.

Sigh. While I do sincerely hope that Leopold has not actually been receiving death threats from overenthusiastic Directioners assuming that she is Styles' "winter girlfriend," I can't honestly say that it would surprise me if she was. I imagine that dating, when you're a member of a boy band as big as One Direction, must be incredibly stressful because, not only do you have to find a girl that you like and who likes you, but you also have to find a girl who can handle being sent death threats as soon as your fans find out you're with her. Plus, Niall Horan and Styles remain the only two members of the band who are still single, so I imagine Directioners are extra-protective of them.

Thankfully, not every Directioner is jumping on the train to condemn Leopold for standing next to Styles and loaning him her coat. In fact, some are actively trying to convince the fandom to, well, calm the hell down.

And then some aren't giving very meaningful answers at all.

I'll repeat again that it is highly unlikely that Styles and Leopold are a couple, if not because Leopold has a boyfriend then because Styles is not dating every single girl he's seen out with. Until we get better confirmation than a Starbucks date, I'll pass on giving this rumor any attention.

More like this
Olivia Wilde & Harry Styles' Relationship Timeline Started With 'Don’t Worry Darling'
By Jake Viswanath
Kanye West Apologizes To Kim K "For Any Stress I Have Caused" In Rare Interview
By Jake Viswanath
Adam Levine Denies Having An Affair — But Admits He “Crossed The Line”
By Jake Viswanath and Radhika Menon
10 Photos Of William, Harry, & Their Cousins Honoring The Queen Together
By Stephanie Topacio Long
Get Even More From Bustle — Sign Up For The Newsletter