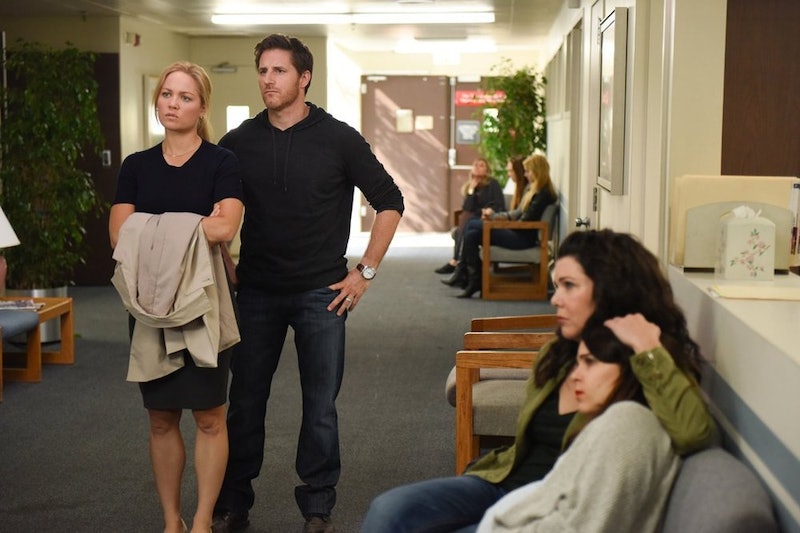 It still hasn't hit me that Parenthood is ending, but creator Jason Katims just gave us a reality check with the series finale date and episode title. Grab your tissues, because everything is happening on Thursday, Jan. 29 at 10 p.m. ET, and the name reflects how we all feel about the Braverman clan: "May God Bless You and Keep You Always." Immediately that got me spinning into Zeek-is-dying mode, which is what the entire final season has been leading up to, but maybe that won't be the case. Based on some new photos from the first episode back after the holidays ("How Did We Get Here?" on Jan. 8) the future looks grim at the hospital as everyone hugs, looks sad or shocked, and sits around in a waiting room. Zeek was just rushed to the hospital after having heart problems in the middle of the night, so I don't anticipate it being flipped into an "Amber is going into labor" moment that brings everyone to the emergency room.

Knowing the brilliance of Katims' shows, I'm sure that whatever happens in the series finale will be both heartbreaking and satisfying. Since he knew this was the final season, there hopefully won't be random loose ends to tie up, and there will be a hopeful tone rather than a completely devastating one when the final credits air. But just in case, I'm weighing all the options, and these are the six things I think will happen in the series finale, based on the episode's ominous title.

This is what the entire season has led up to, and it will still have me in shambles if it happens. "May God Bless You and Keep You Always" sounds like a straight send-off to heaven for Zeek, and whether he dies at the end of the penultimate episode or in the finale, we'll end the series on a somber note filled with tearful goodbyes.

Something Happens to Camille

As Bustle writer Nicole Pomarico recently pointed out, they could do a bait-and-switch with Zeek and Camille. In the photo above (from Episode 10, airing Jan. 8), it looks like she's getting bad news about Zeek, but it could be surprising news about herself. That would change everything for the Bravermans as they deal with potentially losing her, Zeek, or both of them. That would be a sucker punch, but it would be a game-changing shocker. The title applies for Camille for the same reason it does with Zeek.

This is the least sad storyline that could happen in the finale, but it will likely happen in Episode 10 or 11 instead. If Katims does save the baby's birth until the finale, I'm hoping the "May God Bless You and Keep You Always" is about God keeping her son or daughter in his heart always and sending blessings from above rather than Amber or her baby dying. That would be the worst possible outcome, so I don't even want to consider that a potential storyline.

After Crosby's motorcycle accident, he has been hurting and not going to the doctor. Could something happen to him in the final episodes that lands him in the hospital? This would be another red herring situation like with Camille, but it could happen. And with the family's financial woes, would they even be able to afford a hospital stay? Considering the season focused so heavily on Crosby rebelling against Jasmine's wishes, it would be the ultimate "told you so" from her.

Joel and Julia Get Back Together

Yes, this photo is real, and it's from Episode 10. Either Julia is getting bad news or giving bad news — maybe about Sydney instead of about Zeek? — as she's in bed with Joel. This could just be a hookup since they made out in the midseason finale, but seeing them get back together officially in the series finale would be one light at the end of the tunnel. We deserve some happiness, and so do they. Team Joelia. May God bless them and keep them (together) always.

Anything Involving the Whole Braverman Family

This is purposely vague, because maybe the series finale title isn't just about one person. It could be about the Bravermans always staying strong together, because family is the most important. If that sounds cheesy, it's because I'm trying to hold it together imagining a world without Parenthood on every Thursday. Sure, it's been almost canceled many times, but they persevered, and no one is ready to say goodbye.