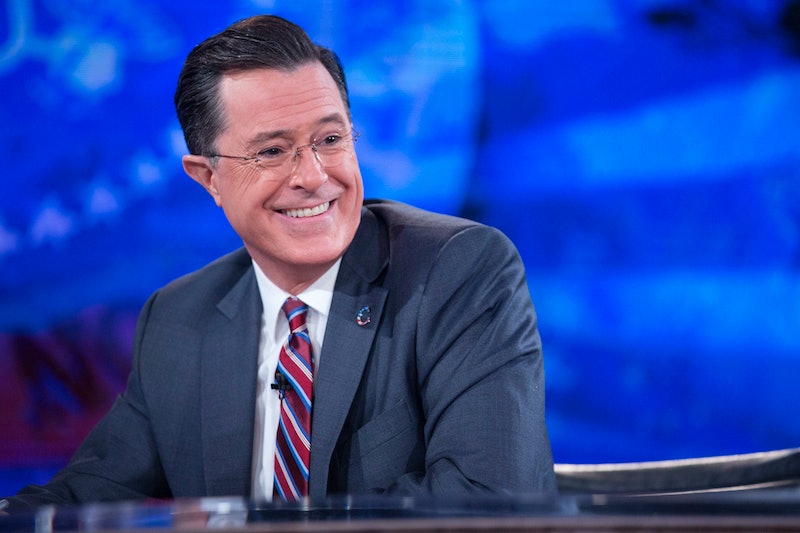 "Folks, if this is your first time tuning into The Colbert Report, I have some terrible news. This, in fact, is your last time tuning into The Colbert Report." That's right, it's over: After nine epic years, Stephen Colbert signed off for the very last time last night during the show's finale. The world will now be painfully devoid of faux conservative mumbo-jumbo to make you laugh and wake up all your roommates on a Thursday night. But of all the questions we have for Colbert now that he's moving on to the Late Show , the very last one viewers had last night was a little unexpected: Why did Colbert end the show with the Neutral Milk Hotel Song, "Holland, 1945"?

If you're not familiar with Neutral Milk Hotel already, it's an indie rock band that formed in the late '80s, and also the band that almost broke up fictional characters April Ludgate and Andy Dwyer on Parks and Rec. It certainly isn't the most expected music choice from someone whose persona isn't exactly "Athens indie band." But the reasoning behind the choice was not at all trivial—in fact, Colbert explains that his obsession with the band began as a kid. Back in April, the New York Times reported about how Colbert had ten older siblings, and that tragically the two closest in age to him died along with his father in a plane crash when the TV personality was a kid. As a result, after the rest of his siblings grew up and left the house, he was mostly on his own, and took solace especially in "Holland, 1945" specifically for these lyrics:

But now we must pick up every piece

Of the life we used to love

Just to keep ourselves

At least enough to carry on…

And here is the room where your brothers were born

Indentions in the sheets

Where their bodies once moved but don’t move anymore

In a show where he famously played a character so unlike himself for so long, it is especially fitting that in the last few moments he got to share something that meant so much to him on a personal level. If you haven't heard the song before and want to feel more emotionally wrecked than you already do, you can hear it below: