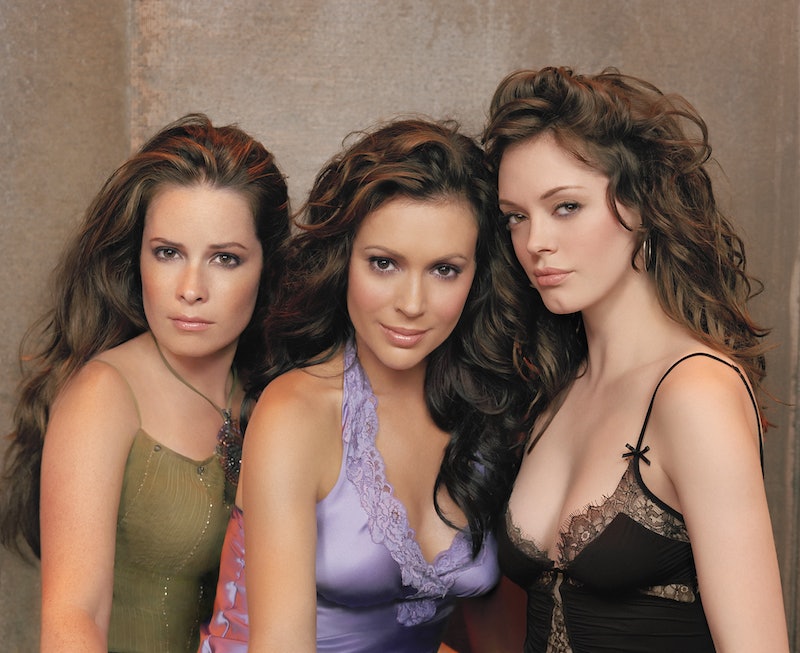 I have two sisters (you already know where this is going). Given our predisposition to being obsessed with magic thanks to Harry Potter, the day we discovered the television show Charmed is a day that will forever live in infamy. By that time the show was being syndicated and would play every day at five o'clock, so no matter what we were doing, how much homework we had, or who was fighting with whom, the three of us would sit down and watch the show about three sisters. Witches: They're Just Like Us! Aside from all the magical powers, surprise demon attacks, and the fact that they were actually grown-ups.

But although we didn't know it yet, even back then, Charmed was teaching us a lot about the real world. Back then, it was our only schema for adulthood because it was the first show we watched with characters older than we were, so we took in all of their struggles and triumphs and the ways that they handled or mishandled them, and came away with some unintentional clarity on how to handle our own lives. For all the demon-hunting that took place on that show, there was also a whole lot of realism, which it doesn't get nearly enough credit for after its epic eight-season run. When you look back, you will realize just how many important life lessons we gleaned from Charmed:

You Will Survive Your Twenties

When Alyssa Milano's Phoebe hits the screen in the pilot, she is a lovable hot mess and a half who doesn't have any part of her life figured out. As a kid I was like, "Pfft, that will never be me." SURPRISE! Turns it Phoebe is all of us. And being able to watch her arc from a confused, directionless 20-something to a woman who followed her passions and found career success was just one more reason to hold hope when we hit the turbulent years ourselves.

I don't know if you've had the privilege of shotgun watching every single episode on Netflix yet, but something that I took for granted as a kid that I appreciate now is that the women drove most of the jokes on the show, instead of just being accessories for the men to play jokes off of. And all four sisters were Masters of Sarcasm. They should open their own school for sassy humans. They were inspiring us to be gutsy and brash long before the rest of society was.

I 'ship Leo and Piper so hard. But what I loved the most about that 'ship is that it was never easy, lovey-dovey, black-and-white with them. Just like in real modern relationships, they had to overcome huge hurdles, some of which had the potential to end them for good. Neither of them were people who made choices recklessly, so it was realistic if not sometimes totally heartbreaking to watch the very real way that they would lose and come back to each other. (I'm not gonna touch that Phoebe x Cole relationship with a stick, cuz as steamy and captivating as it was, I'm not sure how many life lessons I learned from that aside from run.)

Your Sisters Are With You For Life

Any pair of sisters already knows that sisterhood is a bond that is unbreakable, and Charmed showed us strong sister relationships before Frozen was even a tickle in someone's brain. But especially when we were kids, seeing the way that this relationship was tested over and over again, and seeing that the source of their power truly was their love for each other, made us only value our own sisters more.

There Is a Fine Line Between Selfless and Selfish

At the beginning of the series, Prue is asked who she would save: five strangers, or her sister. Her first answer is of course, her sister. But there is of course some inherent selfishness in that answer: No sister would want to live if it meant sacrificing five innocent people. The show really made you examine your motivations for acting, and your obligation not just to protect your family, but anybody who was worthy of protection. Eventually Prue comes to understand that, as do the other sisters.

Hard Work and Patience Really Do Pay Off

It wasn't just Phoebe we watched stumble through the beginning of her adult years. All of the sisters had passions and goals, but most importantly, they had setbacks. Demonic, fiery, hell-sent setbacks, but also realistic personal ones, including the death of Prue. But even in the bleakest times they never fully lost sight of what they wanted out of life, and what was so great about that show being eight seasons long is that you felt all the more satisfied watching the characters grow into their own. You realized from watching them that Rome wasn't built in a day. It might take you eight years or even more to get where you want to be, but that's no reason to give up trying.

You Are Capable Of So Much More Than You Think

The women of Charmed were my first female role models outside of my own family. I think some of this was because I wanted to have magic powers like whoa, but most of it was because they were persevering and strong, even when they were scared out of their minds. Charmed did an amazing job of portraying these characters as women who were unsure and overwhelmed, but had the tenacity to conquer those fears and blossom into the powerful witches and independent women they became.

Especially in the late middle arc of the series, the show examines Phoebe's struggle to find true love in the midst of all the demon-hunting, and Piper's struggle with her desire to "be normal" as a mother and a professional even though she has an obligation to help people. In the end, these problems weren't entirely resolved, but that didn't mean the sisters were unhappy or unfulfilled. Real life involves a lot of compromising no matter what your circumstances. Charmed showed us that happiness sometimes comes from accepting that there are things in your life that you cannot control, and not taking for granted the amazing things that happen anyway.