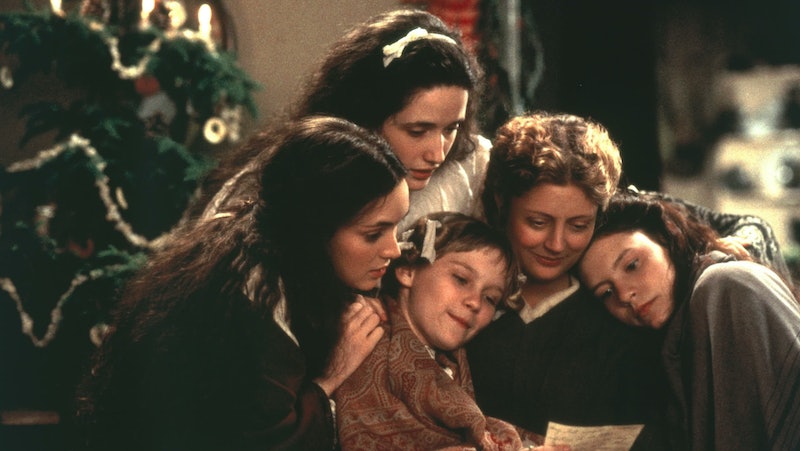 I became a budding feminist early in my childhood (my parents instilled in me the importance of independence and respect and let me watch the Carol Burnett Show), I worshipped at the altar of Lisa Simpson, and my favorite movie was, indeed, Little Women. The 1994 film version of Louisa May Alcott’s stunning novel about the March sisters in their transition from childhood into womanhood during the American Civil War made me forget all about Disney princesses and damsels in distress. Jo, Meg, Beth, and Amy were my guideposts to taking on the world with grace and without apologies. Twenty years later, Little Women is still to this day, in my book, required viewing (and reading) for anyone interested in the stories of women.

When I think about Little Women, I think about Amy throwing Jo’s manuscript into the fire. I think about Beth hunched over, playing the piano as a brief moment of recovery swept over Christmas. I think about Amy falling into the frozen pond, Jo cutting her hair, and Grand Ma-Ma painting teacups. I remember book clubs, and oranges in mailboxes, and Claire Danes ugly crying while holding a baby with scarlet fever. Every time I watch it, something will strike me in a different way. I’ve seen Little Women at least 20 times in its 20 years and it never stops being relevant to my stage of evolving womanhood.

Here’s why Little Women is vital to any feminist’s film collection:

No Boys Vs. Girls

Growing up, most films directed towards young females were plastered with pink and Curlz MT fonts (has that changed?) — Little Women did the exact opposite. It appealed to my early, “boys and girls are not that different” sensibility. There was deep mutual respect between the March sisters and Laurie. He had to dress up and play to be a part of their secret and sacred club, just like everyone else.

There Was Room for All Types of Women

Feminists can be many things. They can be anything, really. They can be mothers and wives. They can be childless. They can be masculine, feminine, domestic, or stay-at-home mothers. They can be the bread-winners. They can value their career above all else. They can be men. Feminists are anything and everything and Little Women was the first time I saw the spectrum of womanhood represented in a truly meaningful way. Before we ever debated what it meant to be a Carrie, Miranda, Samantha or Charlotte or nowadays a Hannah, Shoshannah, Marnie or Jessa, we had Jo, Meg, Beth and Amy. Quite frankly the latter four say much more about womanhood than any of its pop culture predecessors.

In the March sisters there was a dutiful mother and wife, an often selfish free-spirit, a writer whose ambition would not be stifled, and a quiet, shy musician who is deeply charitable. Though the sisters ranged in their desires and goals, they shared a common humanity — a want of companionship and love, a want of identity and connection, and there was never any weakness in that.

Jo March is a Total Hero

Jo was always the sister who fought against the current. She couldn’t ascribe to her gender role in the way it was so often expected. She wasn’t meant for fancy frocks and high society galas. She was a writer who followed her head more often than her heart. She went to the city to follow her passion and fought tooth and nail to accomplish her dreams.

She didn’t settle for what was convenient or expected, she only said yes to the things that truly fulfilled her every need. And she did it all while always thinking of and caring for the ones she loved most. When she unwraps her first published work, it is such a defining moment for any young woman who thinks the phrase, “like a girl” is a compliment, not an insult.

Let’s Talk About that Cast

As much as Little Women has to say about war, duty, and class, the heart of the film is sisterhood. It’s about women taking care of themselves and taking care of each other. With or without men in the picture, the most important thing in these women’s lives are each other. The March women were all so capable, complex, and ambitious as individuals, but they were so much more powerful together. As tough as a pill as it was to swallow for Jo, Laurie’s relationship with Amy never got in between their relationship as sisters. The war only made the Marches more resourceful and strong. Even the (SPOILER ALERT) awful loss of Beth made the women grow closer and value each other so fiercely.