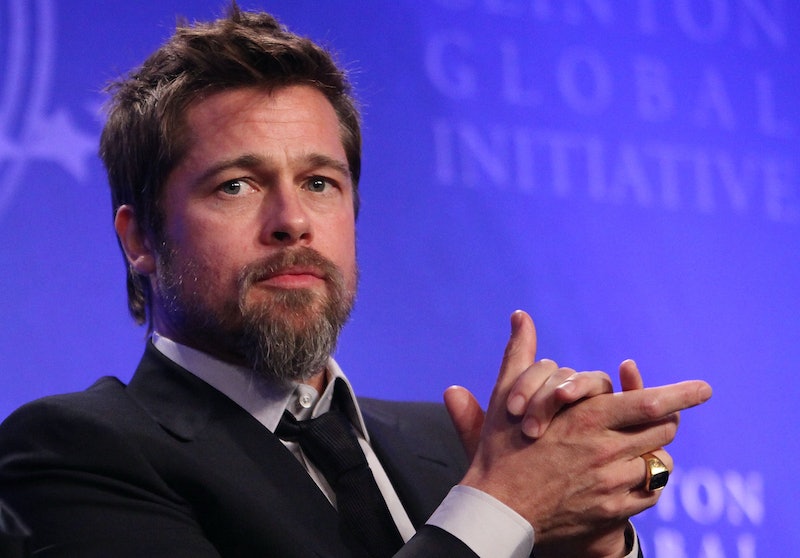 Serving on a jury at one time or another is a right/duty we American citizens have and one many either love or hate. But what if a celebrity is chosen? Is he or she exempt from jury duty, because he or she is just too big of a star? Reportedly, that's the case for Brad Pitt who was deemed "too distracting" for jury duty. Per the Daily Mail, last Friday Pitt showed up to downtown L.A.'s courthouse ready for his potential juror interview when the court told him his services weren't needed, because, well he's just too distracting aka too handsome aka too famous.

Some might think that sounds ridiculous, but can you really argue with that statement? You can't tell me that if you were a juror sitting next to BRAD PITT that you wouldn't be staring at him rather than paying attention to the case at hand. As serious as the case might be, I have to admit that I probably would be distracted by the actor. How could you not?

An L.A. attorney, William Lively, spoke with MailOnline about the process and said,

You just can't stick Brad Pitt in a jury box and expect 11 jurors to ignore him. It's only natural that those jurors would be watching to see how Brad reacts to what's being said and that they could be influenced by his opinions once the jury goes behind closed doors to render a verdict.

Lively also told Us Weekly that if one juror, like Pitt, received "too much attention" then that could "interfere with the objective examination of the allegations" in the case. He added, "It's one of those things where [it's like], 'We're not going to use you because it's going to end up being about you.'"

Has this ever happened before? Surely celebrities are selected for jury duty just like everyone else, and I have a feeling they have been excused because of their celeb status like Pitt.

In July 2014, Madonna was also exempt from jury duty. Actually, for the next six years, Madonna will be excused from jury duty, but only in the state of New York. Per David Bookstaver, a spokesman for the state's court system, "The intent here was not to create a distraction to other jurors or the business of the court."

Is it a good idea to have a celebrity on a jury? As much as we like to say and think stars are just "people," it's easy to see why they'd be a huge distraction in the courtroom. In fact, unlike Pitt and Madonna, Tom Hanks did serve on a jury, but the trial ended early after a prosecution lawyer thanked Hanks outside the courtroom, which broke the rules. I guess he just couldn't resist a chat with Forrest Gump.

More like this
Chris Kaba's Family Continue Fight For Justice After Viewing Police Bodycam Footage
By Sophie McEvoy
Snoop Dogg & Michelle Pfeiffer Lead Moving Tributes To Coolio
By El Hunt
Stormzy Made A Passionate Speech About The Importance Of Diversity
By El Hunt
'Grey's Anatomy's New Intern Got Advice From Dr. Bailey Herself
By Grace Wehniainen
Get Even More From Bustle — Sign Up For The Newsletter