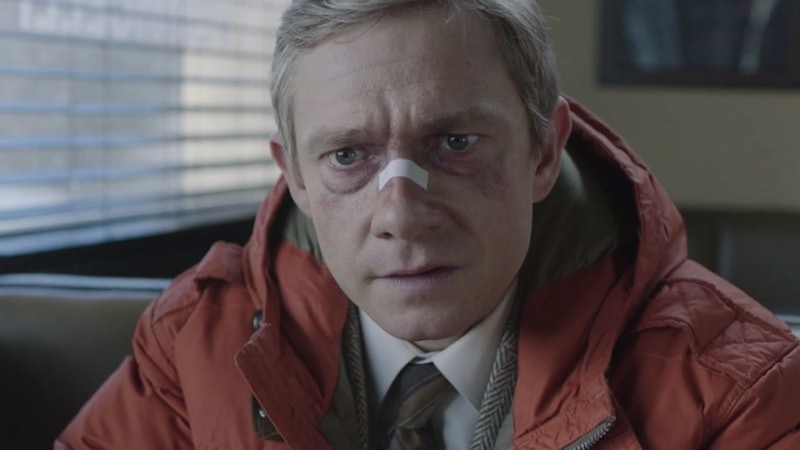 The Emmy-winning first season of Fargo will be available on Hulu in 2015, don'tcha know. It was announced on Friday that the video streaming service struck a deal with MGM, which includes the critically beloved FX miniseries that starred Martin Freeman, Billy Bob Thornton, and breakout newcomer Allison Tolman. Season 1 of Fargo (which is also nominated for a Golden Globe) will become available to stream on Hulu for subscribers in 2015, before the anticipated second season of the show premieres on FX.

Craig Erwich, the Senior Vice President and Head of Content of Hulu said in a statement, "MGM has been our longtime partner and is a consistent distributor of premium content. This expanded agreement allows us to become the streaming home to one of this year’s biggest and most critically acclaimed series, Fargo. After announcing our landmark output deal with FX Productions yesterday, this expanded partnership with MGM brings even more hit titles to Hulu."

In addition to Fargo, other recent FX and FXX programming like You're The Worst , The Strain, Tyrant, and Married will be available. Even shows you haven't seen yet from the network—including Man Seeking Woman (starring Jay Baruchel) and The Comedians (starring Billy Crystal)—will stream on Hulu after their first season debuts in 2015. The SVOD deal will also bring the M. Night Shyamalan event series Wayward Pines to Hulu after its debut on May 14, 2015. As Hulu explained in a statement on their blog, the new episodes will be available to stream the day after they air.

According to Deadline, in addition to the FX and FXX programming that will become available to subscribers in the MGM deal, other shows such as Vikings will hit the streaming service next year. Fans of classic TV series like the Stargate saga, Thirtysomething, Flipper, Green Acres, The Addams Family, Outer Limits, and Dead Like Me will be happy to know they will be some of the titles also available on Hulu come 2015. In other words, expect to spend a lot of quality time with your couch come 2015.

More like this
Here’s Everything Coming To & Leaving Netflix In October
By Jake Viswanath
This House of the Dragon Character Will Create Another Scandal For Rhaenyra
By Kadin Burnett
Nicola Coughlan Shared A Lady Whistledown Excerpt From ‘Bridgerton’ Season 3
By Grace Wehniainen, Alyssa Lapid and Sam Ramsden
Devi Is Going To Meet A “Smoldering Bad Boy” In ‘Never Have I Ever’ Season 4
By Jack Irvin and Gabrielle Bondi
Get Even More From Bustle — Sign Up For The Newsletter