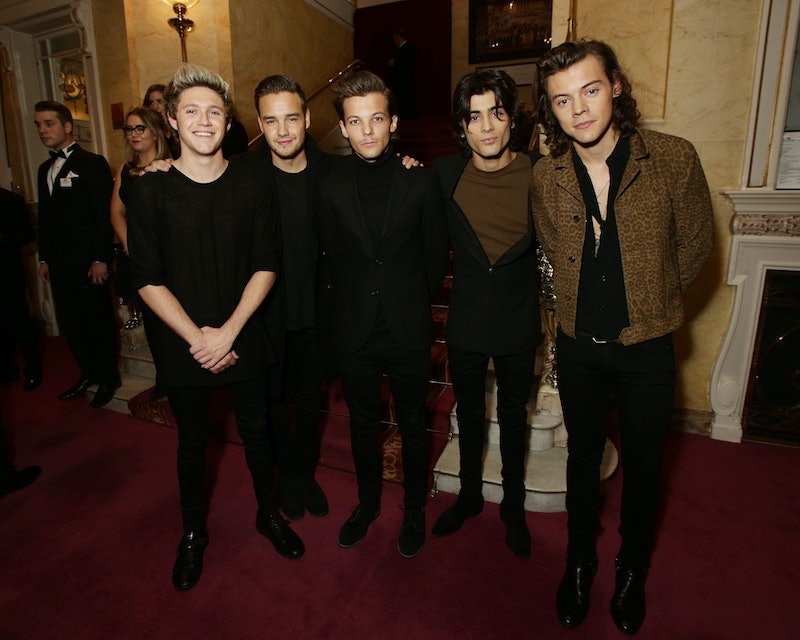 Hear ye, hear ye! I have a message to bring unto all that shall shatter thine own attitude of current popular culture: It's really, totally OK to like One Direction. Un-ironically. Honestly, I mean that. As a die-hard Backstreet Boys fan, I have no qualms with admitting to liking the saccharine smoothness of Top 40 (ah late 20s, you have your perks). However, it took me some time to finally come around to One Direction. When they first blew up all over the stratosphere I thought, "Imposters! Bow down before your elders! You're no REAL boy band!" That was namely because their first singles were pretty mind-numbing and they were still-forming fetuses. But nowadays, One Direction not only make some really catchy and more than tolerable tunes, they actually seem like pretty decent dudes. The band recently spoke to the London Lesbian & Gay Switchboard to encourage their gay and lesbian fans to embrace their identities.

Zayn Malik, the generator of Hair Wisp Gate 2014 said: "Just be yourself. If that’s who you are, that’s who you are and don’t be afraid to be the person that you are," in support of fans who were struggling with coming out or coming to terms with their sexuality. During the interview, the fellas also opened up about their own man crushes to once again brush off the nastiness of homophobia that often comes their way. Considering the guys of One Direction are so young, they're setting quite the precedent for the next generation about acceptance and understanding.

Here are even more reasons why it's totally fine to admit to liking One Direction as a grown-ass person... aside from the fact the band members are all now in their 20s.

Their Man Crushes are On-Point

According to Malik, "...I really appreciate Jake Gyllenhaal's acting. I’ve seen him in a film called Prisoners. He’s so sick." For Louis Tomlinson, "David Beckham is just a cool, cool guy but I saw Russell Brand on Jonathan Ross and he just speaks so incredibly. I look up to him, he’s cool," and for Niall Horan, "Johnny Depp is pretty sick and he’s a really nice fella too." D'awwww. Appreciating men for their talent and personality — fine choices, guys.

Their Music Videos Are So Nostalgic

If there's one thing that always brings a little joy to my heart, it's a cheesy boy band video. One Direction really pulled out all the stops in dreaminess when it comes to the vid for "Night Changes." The key to every great boy band is giving each member their own memorable moments so their fans have more arsenal to argue over who is the best one — this video has that in spades.

We Don't Need to Choose Between Taylor and Harry

Look, if we can all get behind 1989, there's no shame in enjoying Four. I promise, Tay Tay won't get mad at you. Did you learn nothing from the ultra-meta "Blank Space?"

They Have No Time for Hate

The members of One Direction have met many-a-gay rumor in their time in the spotlight. The guys usually respond to those rumors with respect and good humor. Over the Summer, Harry Styles wore a Michael Sam jersey at a concert in support of the first openly gay player in the NFL. He also shut down bandmate Liam Payne for annoying asserting his heterosexuality. Well done, lads.

No, But Really This Song is Great

Try to hate it. TRY. It doesn't matter that the lyrics barely make sense.