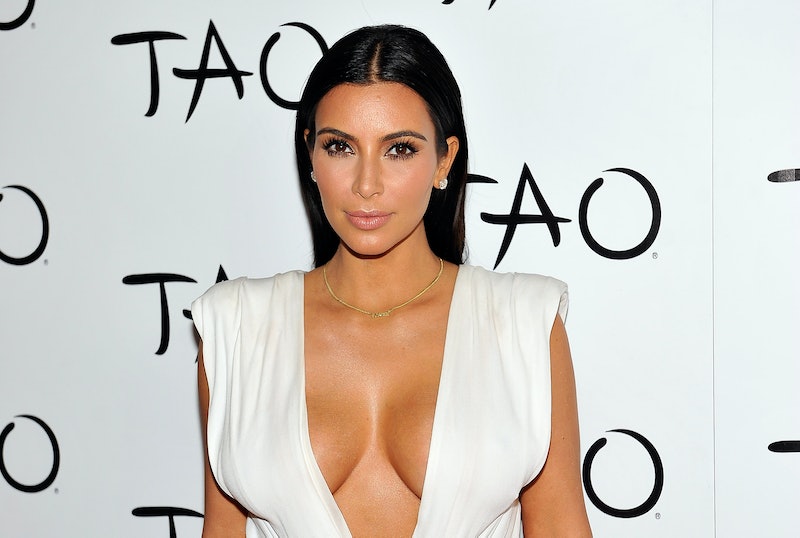 One of the most intriguing questions to come out of this whole Instagram deleting spam followers situation — to me, as an entertainment journalist, I guess — isn't how angry Instagram users are that their follower counts suddenly jumped from 10,000+ to like, 9,000+ or something. I mean, I get it, that's not too cool, but IMO, this is the compelling question we should be asking ourselves now: According to Instagram stats, before the mass purge of accounts, Justin Bieber used to hold the spot as the most popular person on Instagram, and Kim Kardashian held second place. Now, however, that Instagram has rid the site of fake accounts, Justin Bieber's account has fallen to the number two spot — meaning Kim Kardashian is officially the most-followed person on Instagram. The queen of Instagram, if you will.

Considering she's literally about to release a book of her own selfies, gotta admit, it's kind of fitting.

However, it does beg the question: Since Kim sort of won this spot by default, it makes you wonder if she really deserves to be the most followed person on Instagram over the former placeholder JB. I mean, I guess it indicates that she's always had the most organic followers, but if you look at Twitter, Kim's and Justin's stats are wildly different: Kim has 26.6 million followers, while Justin has an astonishing 58 million. Perhaps this whole thing could be a mistake?

Obviously, since I'm in the business of investigating, I had to look into this. So I did, and here it is: Your official Kim Kardashian vs. Justin Bieber Instagram FACE-OFF. I've divided the competition into four very important categories that will determine our winner, and have gone through hundreds of Justin's and Kim's photos to come to fair, appropriate conclusions about who should win this important title. Stakes are high, and competition is fierce — so who's going to win?

The verdict: Though Justin clearly has that bad boy pout thing perfect, Kim has videos on how to take the perfect selfie and is releasing a book of her own selfies — this girl has done her research, and I can't hate on the idea of Kim putting actual work into anything.

The rate at which Kardashians make appearances

The verdict: Kim, solely because she is a Kardashian, so Kardashians are technically in every one of her photos. Sorry, JB, but a few pics of Kendall Jenner on your Instagram don't cut it in our Kardashian obsessed culture — maybe consider getting Kris Jenner to adopt you and we can talk.

The verdict: Justin Bieber, purely because he's so ridiculous and doesn't realize it. Yes, the Kardashian family, especially Kim, can be a little deluded about the ridiculousness of their own fame (something that Scott points out a lot in Keeping Up With the Kardashians, bless his Lord heart). But Kim can be so serious on Instagram, it's not always hilarious — but Justin, on the other hand, is so unaware of how hilarious his lavish lifestyle looks to everyone other than him, especially with vintage filters added. I mean, take the Instagram vid above: He's working out, and filming himself working out, because obvs the calories burned don't count if the rest of the world doesn't know you lift. Oh, JB, honey, no.

The verdict: I mean, sure, that baby that Bieber is holding is adorable. But doesn't Kim kind of just win this category by default? She has North West, who is a literal princess, and she's aunt to both Mason and Penelope Disick, so they're in her photos a lot. Sorry, but no babies are more en vogue than the Kardashian babies.

Kim Kardashian! Sorry, Biebs (and Beliebers), but Kim's Instagram just wins this race by a landslide. Better luck next time!