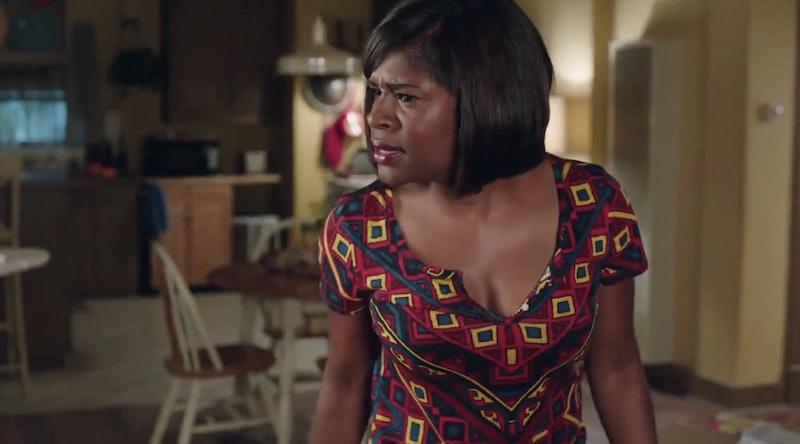 When I first started watching the trailer for the upcoming White-Collar-Man-Goes-to-Prison comedy Get Hard (GET THE INNUENDO IN THE TITLE? DO YOU GET IT? IT'S A REFERENCE TO A PENIS) starring Will Ferrell and Kevin Hart, I wasn't all too thrilled. A naive rich white man gets sentenced to 10 years for fraud so he turns to a black acquaintance for advice on how to survive the clink. No really, I swear, that's the premise. Hart's star is rising at an astonishing rate and Ferrell's often bare bum sits comfortably on the throne of his comedy kingdom — so with these two at the helm even the worst of plots could be saved, right? Well, not exactly. The shining star of Get Hard isn't either of its mega-comedians, it's dramatic actress Edwina Findley Dickerson (Treme).

Dickerson plays Rita Lewis, the very clear pants-wearer to Hart's Darnell Lewis. When he tries to act "hard" and calles her a b*tch, she immediately smacks him upside the head and shouts,"What the hell did you just say to me? What is wrong with you!?" Not only does she totally steal the scene from Hart whose attempts at being intimidating are overwrought, she says and does EXACTLY what all of us would want to say and do. She's only in the trailer for a few brief moments, but her reaction is the most memorable and hilarious bit of the entire clip.

Along with Get Hard, Dickerson has three other movies slates for release in 2015 including the thriller All the Children Are Insane, the drama Free the Deed, and Where Children Play. Based on this trailer alone, I suspect there will be plenty more to see from Edwina Findley Dickerson in 2015.