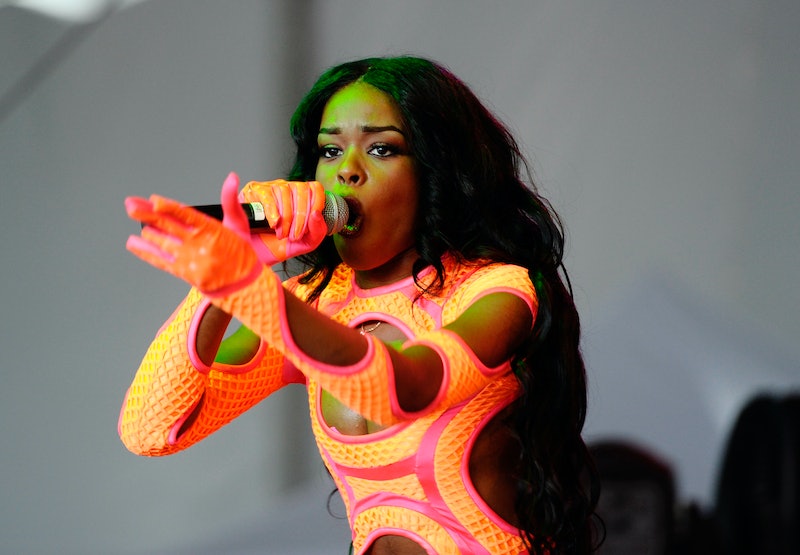 There's another installment in the feud that's erupted between Iggy Azalea and Azealia Banks. On Thursday, in a radio interview with Hot 97, Banks came at Iggy yet again, this time talking about the Grammys. The Broke With Expensive Taste rapper said of Azalea: "The Grammys are supposed to be accolades of artistic excellence. Iggy Azalea is not excellent." Damn, it's 20 degrees cooler in this shade. Azalea responded to Banks this time, which she hasn't done in the past, tweeting: "Special msg for banks: There are many black artists succeeding in all genres. The reason you haven't is because of your piss poor attitude." Well damn. Regardless of whose camp you're in, you might be wondering just when and where this feud ignited in the first place.

OK, so place-wise, it was obviously on Twitter. Any numbskull with an Internet connection could have guessed as much. But when? Banks first called Azalea out on Dec. 3, after the announcement that the cop who killed Eric Garner in New York City was not indicted for the murder. Banks was rightfully enraged and deeply saddened and hurt by the incident, and after bringing up several salient points about the lack of acknowledgement for the worth of black lives, Banks mentioned Iggy Azalea by name (well, kind of):

Igloo Australia immediately started trending. Azalea didn't respond right away, however, to the allegations Banks made that Azalea appropriates black culture but does not want to be an ally when it comes to the difficulties of race. The first vague response Azalea made was a tweet that said "I see all hell broke loose when I was at rehearsals today." She followed up the next day with another indirect response to Banks, that addressed her fans and the public in general:

Which, I suppose, is fine and all; a call to action is always a positive thing, and Azalea has a wide-ranging audience. Since Dec. 4 until last night in Banks' interview, their feud was generally low-key; still there, obviously, but not a lot of back-and-forth between Banks and Azalea. Banks did, though, continue to tweet, sometimes angrily and sometimes not, about the injustice of, well, the justice system.

After Banks' interview on Hot 97 last night, Azalea could not stay silent anymore in the face of Banks' attacks:

The tweeting between the two continued. Thursday night Banks fired more shots at Azalea's response or lack thereof, coining another nickname for her, "Iffy Azuzu." The last response from Azalea, also Thursday night, was "You're poisonous and I feel genuinely sorry for you because it's obvious at this point you are a MISERABLE, angry human being. Regards!"

I'm sure that another response will come from Banks, and, in a way, personally I think something good could come of this. Azalea has been called out about appropriation before, but maybe now the pressure from all the followers on Twitter who are watching will incite her to respond.

More like this
Dan Levy Appears In The Latest Teaser For The Weeknd's HBO Series, 'The Idol'
By Jake Viswanath
Kesha Is Down To Be The Next Bachelorette
By Jake Viswanath
Everything To Know About Taylor Swift’s 10th Studio Album, 'Midnights'
By Grace Wehniainen and Jake Viswanath
Beyoncé’s Special Tribute To Sister Solange Was Both Touching & Hilarious
By Stephanie Topacio Long
Get Even More From Bustle — Sign Up For The Newsletter