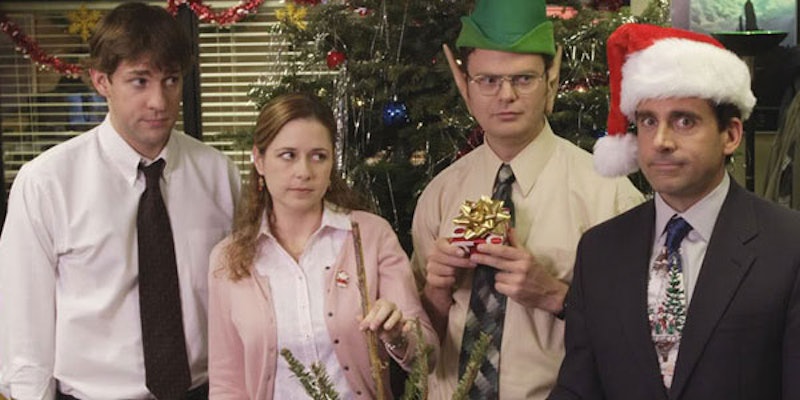 It's been nearly two years since The Office ended for good, but I haven't let go. I still play my favorite episodes on Netflix every night before I go to sleep, and this week? It's been all about the Christmas parties, and I can't believe I forgot how good these episodes are. Nothing puts me in the holiday spirit than watching Michael Scott make a run of the mill office Christmas party into a full-blown event with alcohol, presents, and occasionally waitresses from the local Japanese restaurants.

And since The Office celebrates Christmas in almost all nine seasons of the show, there is plenty of holiday-themed goodness to enjoy when you're not busy watching The Santa Clause (also known as the best Christmas movie of all time, because Tim Allen is a comedic genius). From Meredith's alcoholism to Phyllis as the office's first female Santa, there is honestly nothing not to like about these episodes. I'm serious. They might even be better than the ones Friends has to offer, and in my world, that's a compliment of the highest order.

Here are all 7 Christmas episodes, ranked worst to best. And if this list makes you want to pull up Netflix and spend the rest of your day watching them, it's a perfectly good way to avoid being productive altogether for several hours at a time.

What happens: Dwight decides to show everybody in the office what a real Pennsylvania Dutch Christmas would be, which means he shows up dressed as Belsnickel, the German version of Santa. This is during that awful period of the show where Jim was going back and forth between Philadelphia and Scranton, and also when Catherine Tate was in the cast, so that's how this episode managed to earn the seventh slot on my list.

Best scene: When Jim decides against going to Philadelphia, because he wants to be with his wife. Everybody together now: Aww.

What happens: Andy decides to play Santa and make everyone's wishes come true, which obviously goes horribly awry. Meanwhile, Erin gets drunk after Andy's new girlfriend shows up to the party, and Jim and Dwight are engaged in one of their classic prank battles.

Best scene: When Dwight decides the office needs to listen to some "real Christmas music" and it turns out to be Trans-Siberian Orchestra's "Christmas/Sarajevo," which is such a typical Dwight Christmas song.

Chad Flenderman. Just an easygoing black guy who knows the streets, yet he also went to Oxford. Just as comfortable on a motorcycle as he is on Air Force One. He's also the world's leading Egyptologist.

— Toby, describing the protagonist of his crime novel series

What happens: Holly is back, y'all — and Erin isn't so sure she can be trusted. And since Holly is coming back, Christmas has to be super classy if Michael has any chance of winning her back. Unfortunately, she's still in a relationship with a guy in Nashua, and Michael is crushed. Oh, and Dwight and Jim are in an epic snowball fight that spans the entire episode.

Best scene: When Jim leaves the office to find that Dwight has set up a snowman army in the parking lot, and Dwight's hiding in one. He doesn't know which one, though, so he proceeds to mutilate all of them.

Ultimatums are key. Basically nobody does anything for me anymore unless I threaten to kill myself.

What happens: Karen and Pam team up to make a Christmas party that's way better than the one the Party Planning Committee is coming up with — and they basically win. While that drama's going on back at the office, Michael's looking for a rebound after Carol was offended by the fact that he photoshopped himself into her ski trip photos with her sons, so he and the guys go to Benihana and end up bringing two of the waitresses back to the party with them.

Best scene: When it's discovered that Michael doesn't actually know which of the waitresses he brought back is "his" until he marks her arm with a Sharpie.

Bros before hos. Why? Because your bros are always there for you. They've got your back after your ho rips your heart out for no good reason. And you were nothing but great to your ho. And you told her she was the only ho for you. And that she was better than all the other hos in the world. And then suddenly, she's not your ho no mo'.

What happens: It's time for everyone to exchange their secret Santa gifts, except Michael spent way over the limit when he bought Ryan an iPod. Instead, it turns into Yankee Swap/Dirty Santa/White Elephant, and no one ends up with the gift they were supposed to have received.

Best scene: Jim talking about the teapot he bought Pam, with all their inside jokes inside. God, they're adorable.

Presents are the best way to show someone how much you care. It is like this tangible thing that you can point to and say "Hey man, I love you this many dollars worth."

What happens: Phyllis is Santa this year, and Michael couldn't be more pissed about it. So of course, he dresses up as Jesus, because at Christmastime, Jesus is the only person who could trump Santa. Not that anyone in the office is actually in the Christmas spirit, since they're all convinced they're losing their jobs since Dunder Mifflin is being sold.

Best scene: When Pam attempts to set Oscar up with the cute warehouse worker he has a crush on, Matt.

If this were Russia, yeah sure. Everyone would go to one Santa, and there would be a line around the block and once you sat on her lap and she'd ask you what you wanted, you would say probably "freedom." At which point the KGB would arrest you and send you to Siberia. It's a good thing Russia doesn't exist anymore.

What happens: Everything you need to create the best Office Christmas episode of all time — and yes, this is the episode where Meredith's hair catches on fire and Michael stages an intervention using stuff he found about alcoholism from a Mormon website. Oh, and Dwight's selling the year's most in demand toy: Princess Unicorn. Her horn can pierce the sky!

Best scene: When Michael drags Meredith into rehab before realizing he can't involuntarily commit her to rehab.

When I was in college I used to get wicked hammered. My nickname was Puke. I would chug a fifth of So Co, sneak into a frat party, polish off a few people's empties, some brewskies, some Jell-o shots, do some body shots off myself... Pass out, wake up the next morning, boot, rally, more So Co, head to class. Probably would've got expelled if I had've let it affect my grades but I aced all my courses. They called me Ace. It was totally awesome. Got straight B's. They called me Buzz.

More like this
The Best 'Grey's Anatomy' Intern Moments, From MAGIC to Glasses
By Grace Wehniainen
24 Years Ago, 'Friends' Dropped Its Most Underrated Ross & Rachel Episode
By Grace Wehniainen
Netflix Reveals First Look At Wednesday In The 'Addams Family' Spinoff Series
By Bustle Editors
10 Stranger Things-Inspired Halloween Costumes For True Fans
By Emma Carey
Get Even More From Bustle — Sign Up For The Newsletter