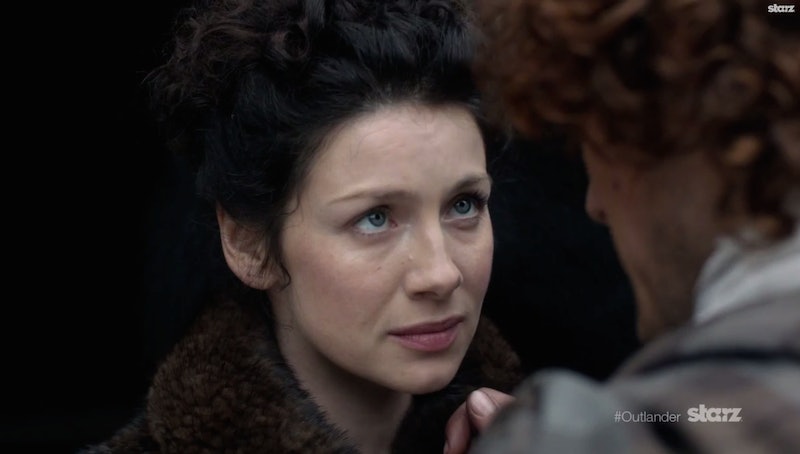 Although Starz’s original series Outlander is only in the first half of Season 1, it’s already proven to be a hit among many television watchers and has received great reviews so far – not to mention, it's even already been greenlit for a second season. So, it’s really no surprise that fans of the show are eagerly awaiting to see what the rest of Season 1 has in store for us, even though they’ll have to wait until April 2015 to do so. Thankfully, we haven’t been completely left in the dark though: In anticipation of the show's upcoming mid-season premiere next year, Starz has revealed a sneak peek of Outlander’s upcoming episodes, which include some juicy new details about what’s to come.

Not only will you all get to see Claire and Jamie’s relationship blossom, according to series star Sam Heughan, but, apparently, the second half of season 1 will also be "a lot darker" than the first half. And judging by the preview, Heughan is pretty much spot on — though he doesn’t give away too many secrets.

With the video even beginning with Jamie saying, “These are dangerous times… be careful,” it seems to exactly foreshadow the "darkness" Heughan describes — and the multiple sword fights, Jamie pointing a gun at a man who appears to be assaulting Claire, and major fights that follow only confirm it.

Action-packed and full of romantic drama, it’s clear that the team behind Outlander really wants to deliver. Check out the teaser below.