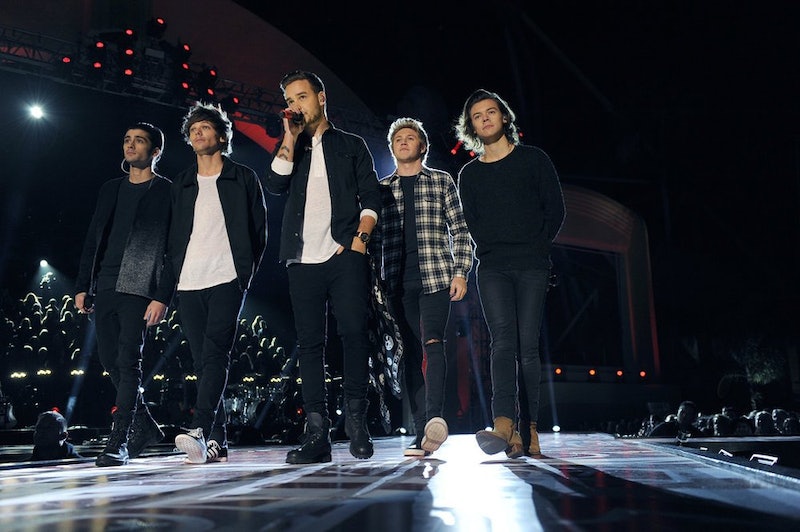 Many kids spend their December days very un-patiently waiting for Christmas Day to arrive — that special morning full of love and presents. But this year it will be Dec. 23 running through all the teenage girls' minds, because chart-topping, swoon-worthy boy band One Direction is giving their fans the best gift of all with their first-ever primetime TV Special. The group teamed up with NBC to create One Direction: The TV Special, a holiday-themed concert that is bound to be the most-watched holiday special this season. The good news is, if you're away for the holidays and happen to miss the epic new program and are demanding replays, I'm going to tell you how to stream One Direction's TV special.

The pop-boy band's fourth studio album FOUR debuted in November and 1D quickly became the only band in U.S. Billboard 200 history to have their first four albums debut at number one. So when One Direction: The TV Special airs Tuesday, it will be more than just a holiday celebration. The band already has two theatrical releases under its belt, but the TV special is a new first for the British five-some. Since 1D's first two films took the Internet by storm, I have no doubt you'll be able to find the new TV concert online.

I can almost guarantee that On Demand would not pass up the chance to get so many hits on a single TV Special. Since it's airing on primetime NBC, On Demand would be the most promising outlet to turn to in order to play and replay 1D's holiday celebration. After all, One Direction: This Is Us was on repeat for months on end, and NBC often puts its series On Demand, so it's likely that this special will be available with at least some cable providers.

If any one site is a safe bet for 24-hour 1D availability, it's NBC's. The site generally offers its programs for free after midnight on the same night a show airs on screen. Since 1D partnered with them for the band's global album launch, NBC is bound to honor them with the same treatment it gives the rest of its programs. Tread carefully, though, this venue tends to have commercials.

Amazon was one of the U.S. promotional partners for the One Direction-NBC Universal collaboration, so there's no reason they shouldn't offer the holiday specials to their costumers. Plenty of their previous specials are available through Amazon Instant Video, so it's likely this one will be too. The only difference between Amazon and NBC is that Amazon might not be free. Generally, a One Direction special costs between $3 and $8.

Like Amazon, iTunes never fails to bring the goods as far as One Direction is concerned. Between the four number-one albums, the British pop band has done some wonderful things for iTunes and I'm thinking they'll return the favor on this one as well.

On Dec. 21, the superstar group finally Tweeted a preview of the flawless concert that you can watch here to hold you over until you can finally watch One Direction: The TV Special.

More like this
Rita Ora Celebrates Finding Her "Fairytale" Ending With Taika Waititi
By Sophie McEvoy and Catharina Cheung
How Ghosts Inspired Kesha's New Music
By Jake Viswanath
Beyoncé’s Special Tribute To Sister Solange Was Both Touching & Hilarious
By Stephanie Topacio Long
Is Dua Lipa Dating Trevor Noah? New Photos Show Them Kissing & Hugging
By Brian Anthony Hernandez and Martha Sorren
Get Even More From Bustle — Sign Up For The Newsletter