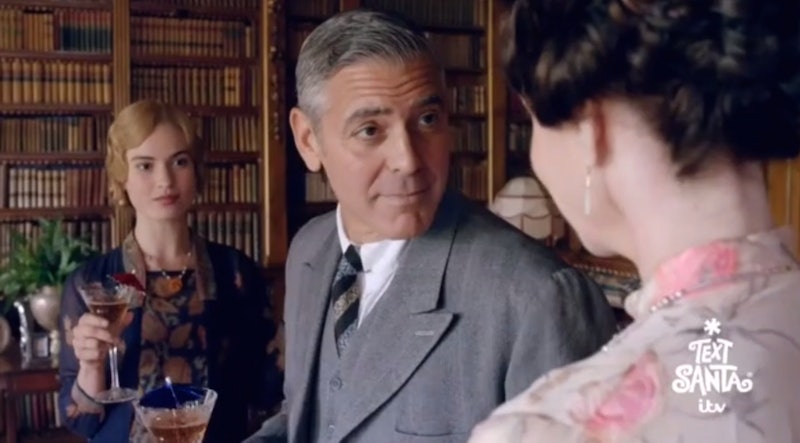 When Downton Abbey's Carson began the trailer for Season 5 by saying, "I feel a shaking of the ground I stand on," is it possible that George Clooney was somewhere in the vicinity? Could the handsome actor have been the hidden inspiration behind that line? I mean, he isn't officially apart of the cast, but I'm willing to bet the ground does feel a little unstable for anyone lucky enough to be in the 53-year-old star's presence. In fact, just seeing Clooney in this 9-minute episode of Downtown Abbey is highly likely to induce some major swooning.

While it may be unfortunate for fans of Clooney and Downton Abbey that his highly touted appearance on the show wasn't actually an official episode of the series, perhaps this will soften the blow a lot: Clooney's appearance in the world of Downton Abbey may have been brief, but it was for charity — and, now that the clip aired Friday night in the UK, I can confirm he looked absolutely dreamy as well. According to People, the George Clooney-featuring Downton Abbey clip was shot for the TV fundraiser "Text Santa," a yearly event that raises money for UK charities during the holidays.

The hilarious skit features Clooney alongside Joanna Lumley, Jeremy Piven, and Julian Fellowes — as well as the rest of the Downton cast — and explores an alternate Downton in which Lord Hollywood (AMAZING name, played by Clooney) exists in Lord Grantham's place. While it's nothing like watching an entire episode of the popular PBS show, it's a guaranteed way tide yourself over with some laughs until season 5 of Downton Abbey premieres in January.

So, would anyone like to offer an approximate guess on how long it takes for the George Clooney effect to set in? If you ask Dame Maggie Smith's character, the Dowager Countess, it takes less than a minute, which is completely believable. Try watching this clip and you're guaranteed to be glossy-eyed and drooling by the end of it.

Check out Clooney as the charming Lord Hollywood below: