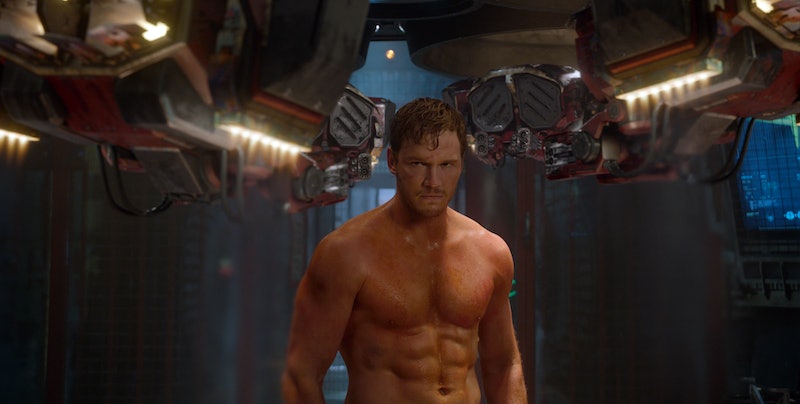 Has anyone had a better 2014 than Chris Pratt? In the past 12 months, the actor has starred in the highest-grossing movie of the year (Guardians of the Galaxy); voiced the lead role in the fourth highest-grossing movie (The Lego Movie); was cast in one of next year's biggest films (Jurassic World); hosted an episode of Saturday Night Live; was named one of People's Sexiest Men Alive, filmed his last season of Parks & Rec, and, in his spare time, became America's collective movie star crush.

And all of it was so deserved. Pratt's been busy for years, starring as Andy in Parks and in films like Moneyball and Zero Dark Thirty, but until this year, he was just a familiar face, not a true movie star. Yet thanks to a few huge hits, 2014 saw the actor's fame skyrocket, and now, an NBC comedy's secret weapon is one of the biggest names in Hollywood.

Pratt's not the only movie star to come out of nowhere this year, either. From Miles Teller to Jenny Slate, these last 12 months have seen big breaks for some of the most exciting talent around. Below, the 11 actors (and one director) who found breakout roles in 2014:

How He Broke Through: Starring in two of the funniest, most exciting, and highest-grossing movies of the year: The Lego Movie and Guardians of the Galaxy.

What's Up Next: Pratt will play the lovable Andy Dwyer for one last time on the final season of Parks and Recreation , starting January, and then it'll be back to action movies with the highly-anticipated Jurassic World, out in June.

How He Broke Through: Holding his own against the formidable J.K. Simmons in Whiplash , a Sundance darling, and charming audiences in movies like That Awkward Moment and Two Night Stand.

What's Up Next: Teller's star has been rising for years, but 2015 will see him take on his biggest roles yet, including Mr. Fantastic in the Fantastic Four reboot and leading man parts opposite Emma Watson and Anna Kendrick in La La Land and Get a Job, respectively. He'll also reprise his role as Peter in the Divergent sequel, Insurgent, set for a March release.

How He Broke Through: Spending his life playing Mason in Boyhood , Richard Linklater's groundbreaking, 12-years-in-the-making film.

What's Up Next: Possibly more acting, possibly photography, possibly painting — the 20-year-old has said he's not sure what exactly he wants to pursue in the future, but that it'll definitely be related to the arts.

How She Broke Through: Starring in the funny, feminist Obvious Child , and showing up in TV series ranging from Married to Parks & Rec to Brooklyn Nine-Nine.

What's Up Next: Married was renewed for a second season, and then there's Digging for Fire, a drama co-starring Anna Kendrick and Brie Larson. But the most exciting Jenny Slate project in the works? A feature-length Marcel the Shell movie musical. Oh, yes.

How He Broke Through: Portraying Martin Luther King, Jr., in Selma , as well as taking on supporting roles in Interstellar and A Most Violent Year.

What's Up Next: A likely Oscar nomination for Selma. Afterwards? Leading roles in films like Captive, a crime thriller, and Americanah , a romance based on the highly acclaimed book.

How He Broke Through: Starring as Stephen Hawking in The Theory of Everything, a performance good enough to make him the frontrunner for this year's Best Actor Oscar.

What's Up Next: He has a supporting role in Wachowskis' Jupiter Ascending, due in February, and is set to star alongside Tom Hooper in the film adaptation of The Danish Girl as a transgender artist.

How She Broke Through: Making Selma, one of the year's most acclaimed movies, and snagging a Golden Globe nomination (the first for a black woman) for Best Director, with an Oscar nod likely to follow.

What's Up Next: DuVernay has said she plans to direct a cable TV series about the black experience in America.

How He Broke Through: Playing Louis Zamperini, the real-life Olympian and prisoner of war, in this month's Unbroken . He also starred in the British drama Starred Up, and appeared in 300: Rise of an Empire.

What's Up Next: O'Connell has two films set for release in 2015, the historical drama '71 and a romance called Tulip Fever, and he's attached to star opposite George Clooney in the upcoming Money Monster.

How She Broke Through: Playing the title character in the period drama Belle, and portraying a pop superstar in Beyond the Lights.

What's Up Next: She'll be appearing in Jupiter Ascending and a drama called The Whole Truth, and alongside Will Smith, she's set to star in an NFL drama called Concussion .

How He Broke Through: Bringing YA hero Gus Waters to life in the blockbuster adaptation of The Fault in Our Stars. He also appeared in Divergent and Men, Women & Children.

What's Up Next: There's Insurgent, of course, but more excitingly, the lead role in Van Cliburn , a biopic about the real-life piano prodigy.

How She Broke Through: Portraying "Amazing" Amy Dunne in Gone Girl, a role that's earned her a Golden Globe nod.

What's Up Next: If all goes well, maybe an Oscar nomination. As for afterwards, the new mom has projects lined up including a Thunderbirds TV remake and a thriller co-starring Nick Nolte called Return to Sender.