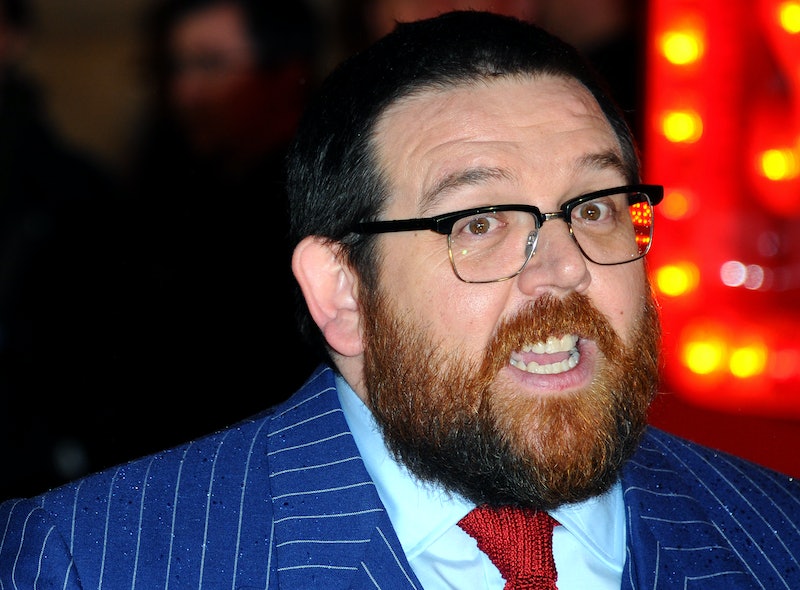 I audibly squealed when Frost was introduced at the end of the Season 8 finale episode "Death in Heaven." The first season with Peter Capaldi in the Doctor role had ended on a pretty somber note, so seeing the jovial Frost being the epitome of jolly was refreshing. Although Frost is young for Santa (he's only 42 years old), sneak peeks of the episode show that he fits into the white beard nicely.

Now, his friend and frequent collaborator Simon Pegg has been on Doctor Who before himself (Pegg was in the first season of the Doctor Who reboot back in 2005 as the villain to the Ninth Doctor and Rose). So it's pretty much no surprise that Frost, known for his penchant for sci-fi, has made his own way to the Whoniverse.

Frost has been amusing us for years, and his career doesn't seem to be slowing down at all. So, let's take a look at his non-Santa roles.

This British TV series first aired in 1999 and only had two seasons, but it introduced the entertainment world to Frost and Pegg as onscreen BFFs.

Shaun of the Dead

The first movie of the Three Flavours Cornetto trilogy, the hilarious buddy comedy/zombie movie Shaun of the Dead introduced Frost and Pegg to American audiences.

In their second film directed by Edgar Wright, Frost and Pegg took on the role of police officers in a sleepy British town that was hiding a dark secret (never trust the elderly!).

Another Frost and Pegg venture (not part of the trilogy though), the British dudes came to America this time — and discovered an alien (voiced by Seth Rogen).

The final film of the trilogy had Frost and Pegg also dealing with aliens — but this time, during a pub crawl. These men are truly after my booze-filled heart.

Frost moved into the role of leading man in 2014 with this film about an office schlub who learns how to salsa dance to impress his boss (portrayed by the poetic, noble land mermaid herself, Rashida Jones).

Although Pegg won't be appearing in the Doctor Who Christmas special, I think Frost will be just fine with the Doctor as his sidekick. But we'll have to see for ourselves when the "Last Christmas" Doctor Who special airs on BBC America on Christmas night at 9 p.m.