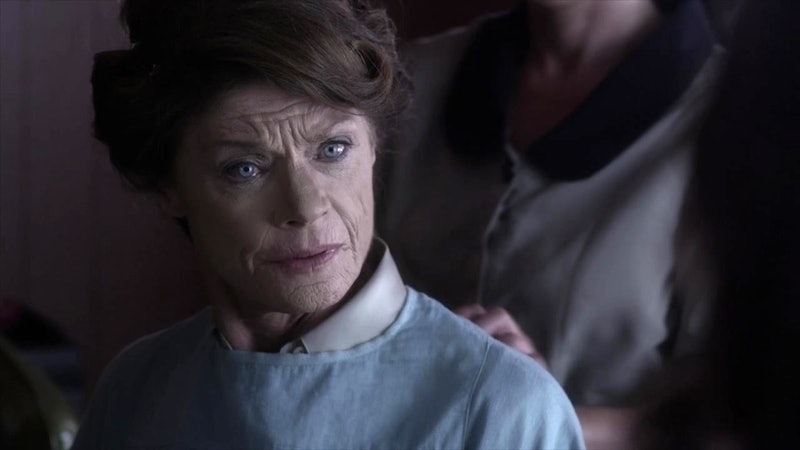 A fan favorite from Ravenswood is back on Pretty Little Liars, and no, I'm not talking about Miranda's hot-but-scary uncle. (But seriously... swoon.) According to these new PLL promos for the upcoming Season 5B episode "Through A Glass, Darkly," the mysterious medium Ms. Grunwald is back in Rosewood. What could she be up to?

We haven't seen Grunwald since the series finale of the short-lived spinoff Ravenswood, but it appears that Grunwald's purpose in the new episode has little to do with the ghostly town where Caleb made a pitstop once upon a time. In fact, it looks like Grunwald will be spending most of her time dealing with the drama surrounding Mona's mysterious murder — and she might finally be able to tell us whether Ali killed Mona once and for all.

We know for certain that Grunwald has real psychic abilities, which, in a secret-filled world like the Pretty Little Liars universe, is incredibly helpful. After all, Grunwald was the person who told the girls that Ali's murder didn't exactly stick. (Sure, she did it in the most roundabout way possibly, but, you know... it's a TV show. We need the suspense.) And now it seems that Grunwald has intimate details about whether Ali really killed Mona or not — or, at least, has the ability to find out.

In the new promo we hear Grunwald talking about two girls — they hated each other because they both feared the other. Though she doesn't mention the girls by name, the promo seems to suggest that the people she's talking about are Mona and Ali. But if Ali was so afraid of Mona, does that mean she didn't actually kill her? From the promos, it looks like Grunwald can find out for sure using her handy-dandy psychic-reading method: Stare into the other person's eyes until she learns the truth about who they are. Now the question is: What will Grunwald find?

My theory? Grunwald will tell the liars once and for all that it wasn't Ali who took Mona's life. Even if Ali did hate Mona and did want her dead, it's doubtful that she could get away with physically murdering Mona and look like Mary Sunshine in the 15 minutes before the cops arrived on the scene. In my mind, that means that someone else — someone dressed as Ali — killed Mona... and Grunwald might be just the person to tell the liars to start looking for that person.

Right now, the liars are convinced that Ali killed Mona, and when the liars are convinced of something, there is no moving on. (Remember how obsessed they were with pinning everything on Melissa before uncovering the truth?!) But Grunwald might be the one person who can convince the girls of the reality of the situation — if Ali didn't commit the murder, then, well, someone else did. The enemy you don't recognize might be even scarier than the one you do — and Grunwald's return might mean that the liars have even more to fear than just one sociopathic blonde.

More like this
The Best 'Grey's Anatomy' Intern Moments, From MAGIC to Glasses
By Grace Wehniainen
Shonda Rhimes' Net Worth Makes Her One Of The Wealthiest People In TV History
By Hugh McIntyre
Kidnapping Victim Jan Broberg Is Prepared For A Friend Of The Family Criticism
By Brad Witter
'The White Lotus' Season 2 Trailer Teases Multiple Affairs & Another Dead Body
By Bustle Editors
Get Even More From Bustle — Sign Up For The Newsletter