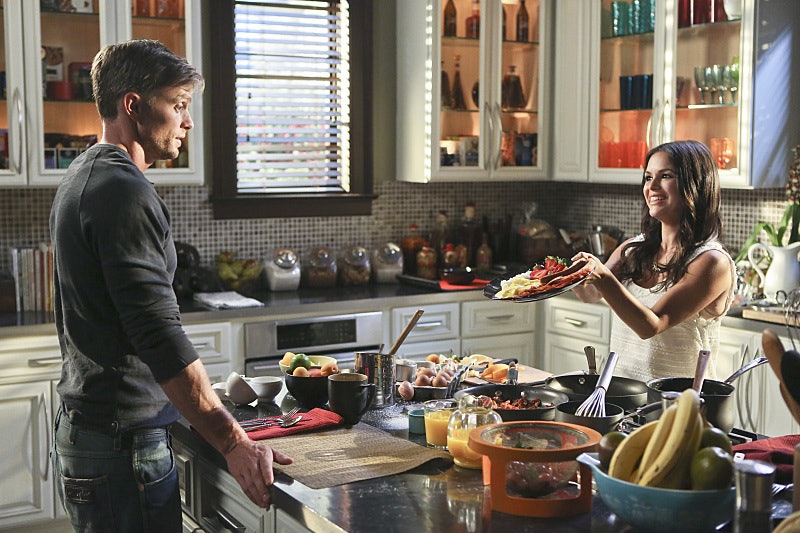 When the denizens of the small-town community of Bluebell, Alabama left us in May, so many questions were left unanswered for us Zade-craving Hart of Dixie fans. The Hart of Dixie Season 4 premiere aired Dec. 15, and the first episode finally shed some light on some of these afore-mentioned shenanigans: Wade came to his senses after months of waiting and confessed his love for Zoe; to George and Lavon's dismay, Lemon returned from the singles cruise not-so-single; and some predictable new relationships are already brewing in the midst of all the drama. The only problem is that while some of the drama was being patched up, it only opened the doors for more questions when Hart of Dixie Season 4 returns in January (likely on Jan. 9, considering that's when the season was originally slated to start).

Executive producer Leila Gerstein told E! Online that Hart of Dixie writers are on a mission to jam-pack more drama than you can imagine into only 10 episodes, instead of the usual 22. Writers have alluded to Season 4 potentially being Hart of Dixie’s last, in which case, these next nine episodes must tie up every loose end. Four seasons later, HoD's beloved characters are finally fully developed, and that means extra drama for us. So when the second episode airs Monday, these questions are bound to be at the forefront of our minds (and the minds of everyone in Bluebell):

1. Will Zoe or Lemon Tell Wade About the Pregnancy?

We knew Zoe was going to be pregnant during Season 4 because Rachel Bilson was preggo in real life, too. We just weren't sure whose baby it would be and now we have our answer. Zade reunites, has sex, breaks it off, and eight weeks later she's pregnant, but it isn't Wade's? That's a twist that's just not gonna happen — it has to be Wade's. So who is going to get to him first? Zoe basically slammed the door in Wade's face with no visible indication that she was even considering telling him. Little does she know, Lemon and AnnaBeth saw the test results and aren't likely to keep it to themselves.

Will George & Lavon Find Out that Dr. Henry Dalton is Just a Ruse?

It was of little-to-no surprise when Lemon showed up with a new hot doctor boyfriend who is everything her conniving grandmother has been looking for in a son-in-law. And shocker: it's just another faux relationship. Lavon and George are both on a mission to win Lemon's heart and they sought out the town investigator, Frank, to dig up dirt on Dr. Henry Dalton. Of course, there isn't any and the man is as picture-perfect as he says he is... but only until Frank somehow finds out the relationship is a fake.

How Will Brick & Shelby Get Caught Before They Come Out?

I knew Laura Bell Bundy would be back for another season — Brick just cannot stay away. But this is not the relationship Lemon and Magnolia had in mind for him. Supposedly the couple is going to confess their affair to the girls as soon as they get the chance, but it can't possibly be that easy. AnnaBeth is already on to them and she told Lemon of her suspicion, so it's only a matter of time before somebody finds them out.

Will the Hot Firefighter Lady Stay in Bluebell For Crickett?

Crickett got the spotlight for once in the premiere of Season 4, and she deserves it. Her coming out was a huge deal for Bluebell because she's the only lesbian in town to date. But that's just the problem — there's no love interest options for Crickett. Or there weren't until Tom recruited the town's bravest and strongest as the town's new fire volunteers. Although that plan completely failed, it got Crickett a date with Jaysene! With any luck, Crickett will become a core character this season and we'll have another Bluebell relationship to root for.

Where Were Rose & Magnolia?

The premiere was severely lacking in the teenager department and I found myself missing their shenanigans. When Season 3 ended, Rose was working as a shadow for Brick and Magnolia was not happy about it. I quite enjoyed that story line and I want it back, please.