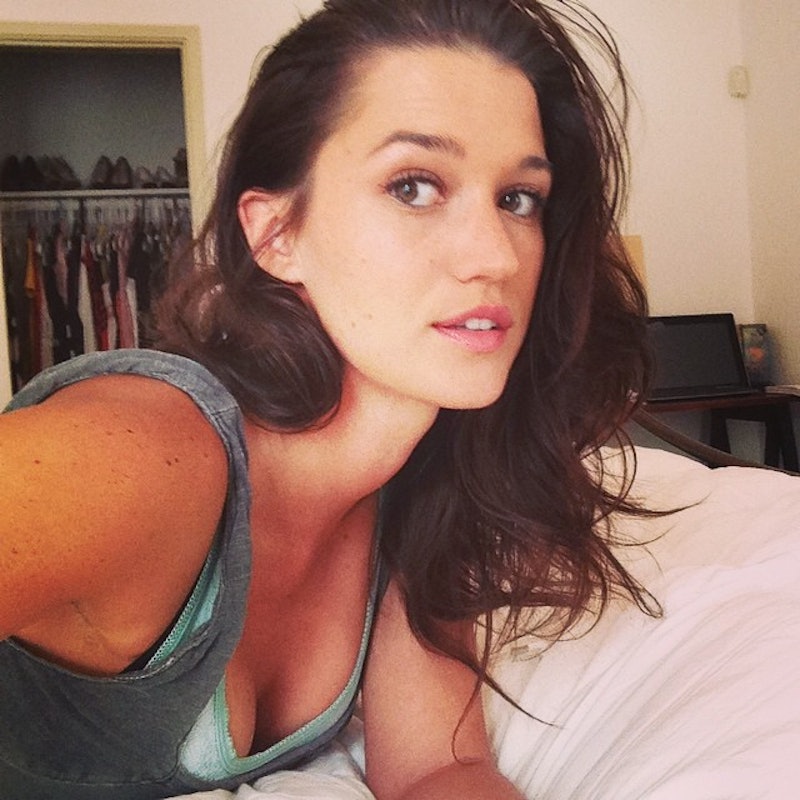 Before Chris Soules' season of The Bachelor has even started, one of his wannabe-fiancees is generating spoilery rumors. Why is Bachelor hopeful Jade Roper so "scandalous?" Well, Roper took some nude photographs for Playboy and apparently that's enough to bring out the S-word. Blogger Reality Steve — always a reliable source for Bach gossip — claims that this will be a big deal for the show, especially because according to his sources, she might (spoilers!) be a contender for Chris Soules' final four women. In 19 seasons, somehow no woman participating in the Bachelor/ette/Paradise/Pad series has ever published nude photos. Well, color me unsurprised that they're getting up in arms about Roper's photographic past. But it's a pretty big waste of time, if you ask me. Update: It now seems like Chris could eliminate Jade because of Playboy and that Playboy could keep Jade from being the next Bachelorette. Here's hoping Chris and ABC are more open-minded.

Earlier: First of all, Jade seems like exactly the type of girl Chris is going to connect to. She grew up in a small Nebraska town, but recently moved to California in hopes of becoming an actress. Chris is a Middle American farm boy, and his tiny town was one of the big reasons why Andi, the Bachelorette who almost picked him, decided to go with one of her other choices (Georgia boy Josh Murray, whose hometown was a little more cosmopolitan). So someone with a similar background will no doubt have a huge edge for Chris. And it's not like she's otherwise had a "scandalous" past — she's not a convicted felon, she owns her own culinary business back in Nebraska, and she's not even known to be a huge jerk or anything.

And given that she willingly participated and consented to appear nude and I assume she was compensated, I don't see how you could argue that she was exploited, either. Basically, if this makes you think less of Jade Roper, then you're probably slut-shaming. Nope, you know what, I'm calling it: you are slut-shaming. And for no good reason. Are women who willingly show themselves naked not good enough for Chris Soules?

After all, what is The Bachelor if not an Amateur Playboy competition? One man tries to balance "dating" over 20 women at once, while each one remains devoted to the resident big man on campus, swearing that they're falling in love. Meanwhile, everyone (most especially the ladies) are manipulated into situations where they're expected to put on bikinis and run around half naked. Sure, there's a layer of cheese on top, and a layer of cheap Rite-Aid Valentine's Day candy on top of that, but at it's core The Bachelor is about watching good looking people run around making out with one another. And while we can argue about the ethics of distributing porn, including nude photos, all day, that has nothing to do with Jade Roper. Period.