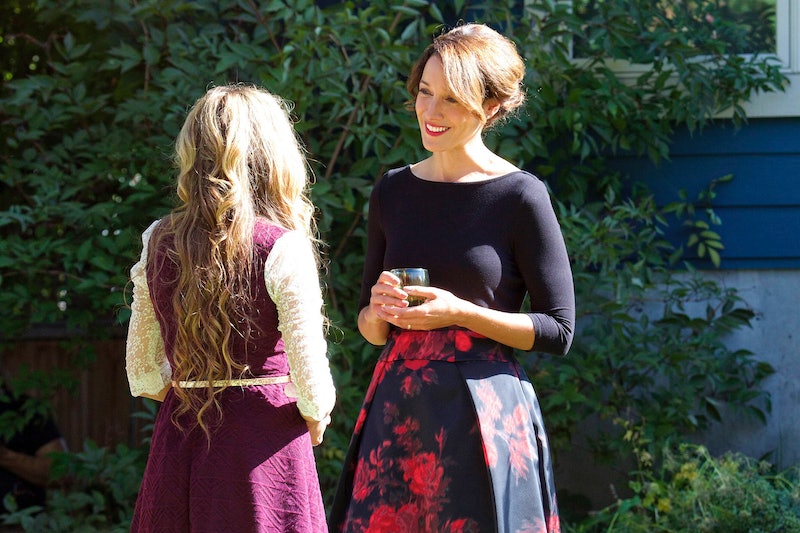 A couple returns home. There's someone else on the walkway — a young girl in her late teens. "Excuse me," she says. "I think I'm your daughter." Sounds like the type of thing that only happens in Lifetime movies, right? Well, this will soon be happening in a Lifetime movie: A Wife's Nightmare, which will air on Dec. 27. But is it actually too strange to be true? Is A Wife's Nightmare based on a true story? In the movie, what's true and what isn't true is complicated by the fact that the wife in question — Liz Michaels, played by Jennifer Beals — has returned home after a stay in a mental hospital following a nervous breakdown. So, when she starts to question the true motives of her husband's so-called long-lost daughter, she can't exactly trust herself. "She doesn't know what's real, and what's not real," Beals said in an interview, "and that's really troubling for her — and then everybody around her."

Outside of the film, the truth is similarly murky. One thing is clear: A Wife's Nightmare is definitely, 100 percent, totally based on a true story. Any commercial, article, or tweet makes sure to mention it.

The details of the true story, though, are a closely guarded secret. I can't seem to find any mention of which true story the movie is actually based on. There's no mention of who the real "Liz Michaels" could be, and how closely the movie of A Wife's Nightmare stuck to what happened to her in real life. I get that they don't want to spoil the ending of the movie before it's aired, but you'd think that someone would've let something slip in an interview by now. No dice.

We don't even really get a geographic area to zone in on. The movie takes place in the fictional town of "Ridgewood." There area bunch of Ridgewoods around the country, but the town might have special significance for those of you keeping track of your Lifetime movies. Ridgewood was also the setting of Lifetime movies A Mother's Nightmare and A Daughter's Nightmare. In other words, it's a town you don't really want to live in, unless you like melodrama.

Maybe after the movie airs, there will be more behind-the-scenes info about the story that inspired the movie, and how closely Lifetime stuck to the facts. But, for now, it's anyone's guess, except for knowing that there's some tiny germ of truth in there somewhere. To be safe, next time someone shows up on your doorstep claiming to be a long-lost relative, just close the door on them.