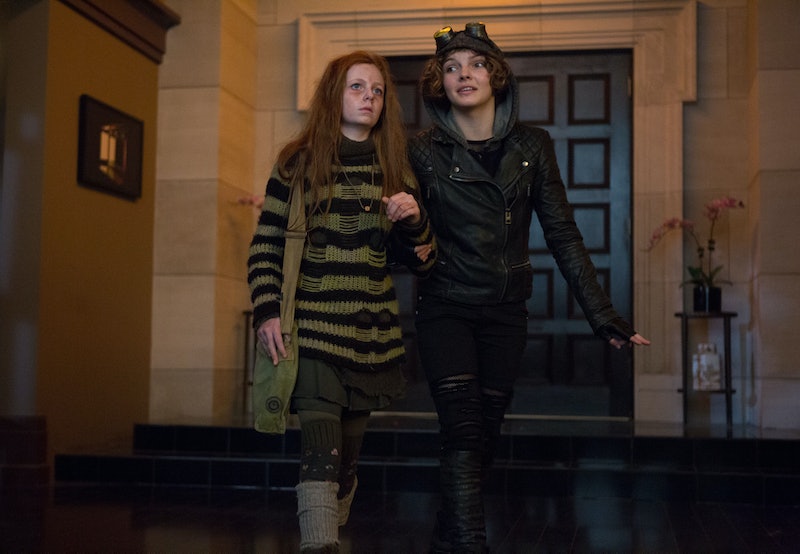 One of the biggest complaints about Gotham has been how the show introduced Batman's greatest villains before Bruce Wayne even hit puberty. Considering that we may never see Batman on Gotham , the arc of his major villains will be very different than what many comic book fans, like myself, want. Gotham has introduced nearly all the heavy hitters from Batman's rogues gallery, except for Ra's al Ghul, Black Mask, Hush, and of course, The Joker. While Season 1 introduced many would-be villains, only one got the spotlight: Oswald "The Penguin" Cobblepot. Good guy cop Jim Gordon may be marketed as the lead character, but it's Cobblepot who has received the meaty narrative. Cobblepot has transitioned from disgruntled lackey to powerful criminal schemer and we're only halfway through this first season. As great as The Penguin has become, he can't be the only villain given any character development. So, which Gotham villain will have the spotlight next?

Edward Nygma has yet to show any criminal desires. He's thus far just an awkward, highly intelligent coroner/forensic scientist for Gotham Central Police Department. At this point it's hard to imagine him taking on the name The Riddler without something pushing him over the edge this season.

Cory Michael Smith, who plays Nygma, told Entertainment Weekly that his character will be "in the police department for a while." So it's not likely that the Penguin will be replaced with the Riddler.

Not going to happen. While Ivy Pepper is a creepy kid, she's still just a kid. Poison Ivy operates in the weirder, more fantastical realm of Batman's mythos. I can't imagine her powers ever being featured on the show. Plus, who would find anyone with the name Ivy Pepper threatening?

In the current Catwoman comics written by Genevieve Valentine, the fascinating Selina Kyle has transitioned into being a badass crime boss. While that storyline would easily fit into Gotham (and the show could use some better written female characters), like Poison Ivy, Selina is just too young on the show to pull of being the main villain that ties everything together. But if my theory that Catwoman is Falcone's daughter is correct, then she'll become much more important to the show than she has been thus far. Selina is an awesome character, so the writers of Gotham would be smart to develop her more.

Could we see Harvey Dent become Two-Face on Gotham ? He's the most likely to turn full-on villainous, but Season 2 may be too soon. So far we've only seen Dent as a morally just Assistant District Attorney and one of the few legit good guys on the show. To give him an effective transformation into Two-Face, Gotham needs to develop Dent's friendship with Gordon and show how important he is to cleaning up Gotham. None of that has happened yet.

It has been announced that a younger version of Scarecrow will be on Gotham this season, which means more origin stories, less outright villainy.

The Joker or Harley Quinn

It's not likely that we'll see either of these fan-favorite villains just yet. Sorry, folks. We already know Harley Quinn won't appear on Gotham anytime soon, as showrunner Bruno Heller told Entertainment Weekly. And The Joker only really works as a counterpoint to Batman. Without Batman, The Joker would throw the tone of Gotham out of whack pretty greatly. He's a great villain, but unless the show decides to give Jim Gordon the types of storylines usually associated with Batman, we won't be seeing The Joker anytime soon.

In his EW interview, Heller also said, "Once we introduced those initial characters—Penguin, Riddler, Ivy, Selina—then we’ve slowed down with those aspects and we’re bringing in those iconic D.C characters in a much more measured way, which was always the intention." So, that means the show will take it's time to see the characters we've been introduced to become the villains we know them as. In another interview with EW, Heller gave some more major hints about the Big Bad of Season 2:

It won’t be one guy or gal. Thematically it will be around one of those great iconic characters, but it won’t be solely concerned with one of them.

So part of that "measured way" of bringing in comic characters may mean letting villains share the spotlight as we get to know multiple characters at once. But no matter which villains are brought in, it's important for comic fans to realize that Gotham isn't going to show them in the way we're used to. During the Television Critics Association's press tour, Heller said:

The really interesting parts of the stories are the origin stories. As soon as you're into the capes and the costumes, it's less interesting than how the people got there.

Gotham continues to be a curious show, even though it made progress when it gave the Penguin center stage. It wavers tonally between super serious 1970s flavored noir and pure camp. However there are inherent problems with making a show like Gotham without Batman. For Season 2, the series has to give a credible threat to Penguin, otherwise the criminal underworld is going to be headed by one dude, which would be extremely boring to watch. Hopefully, when Gotham returns on Jan. 5, it will be able to correct some of these issues and set things up for a more successful Season 2, with more scene-stealing villains.