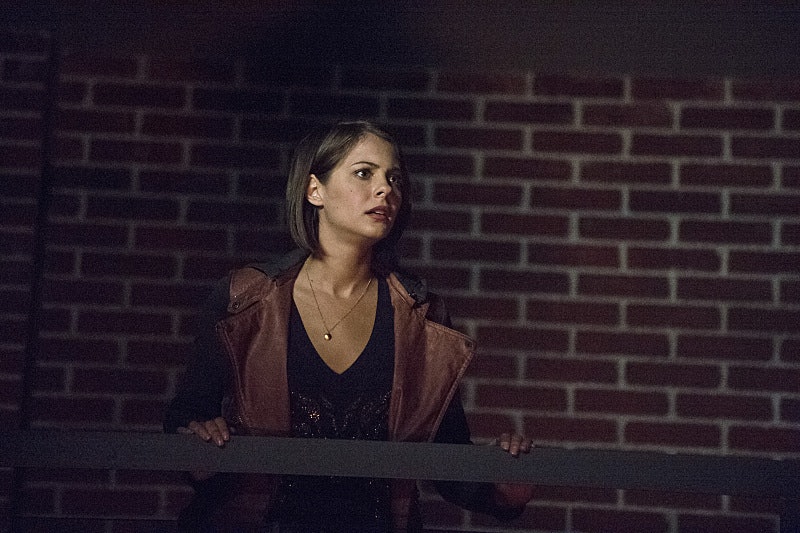 First off, let's acknowledge that Willa Holland seems to be the only human on the planet who is capable of successfully pulling off a crop top as well as she does. Secondly, let's acknowledge that her on-screen alter ego, Thea Queen, has a million secrets in Arrow Season 3. Ever since the end of last season, when Thea picked up and left with daddy dearest Malcolm Merlyn, she's gotten very good at keeping said secrets. Honestly, right now she might be better at keeping secrets than Oliver. And, you know, considering the HUGE secret regarding the identity of Canary's killer, could Thea actually know that she killed Sara?

It's heavily suggested that Thea doesn't know she killed Sara. She's shocked to come across Laurel in the cemetery next to Sara's grave and outright denies to Oliver that she was in Starling City at the time of Sara's murder. But if there's anything we've learned after three seasons of Arrow, it's that we can't trust anyone, ever. So even though Thea seems completely oblivious to her murderous ways, there's a high chance that she actually knows exactly what she's done. Consider the fact that she lied to Oliver about Merlyn. Oliver knows that Merlyn's alive. He knows that Thea was with him in Corto Maltese. Yet, when Oliver calls her out on it, Thea denies it all.

When Oliver confronts Merlyn about this, he cites crazy hypnosis/mind control as to why Thea has no recollection of that one night in Starling City. It's believable, sure, considering it took Roy a long time to recover from his Mirakuru. It almost seems completely plausible that Thea was brainwashed into killing Sara, and left with no memory of it whatsoever. When we see the grainy footage of the actual murder going down, Thea does have quite a blank, expression-less look on her face, like she has no idea what she's just done either.

But remember how when Oliver crashed through the window dressed as the Arrow into his shared apartment with Thea (how do you cite that glass repair for insurance purposes? Is it, "due to vigilante"?), she did a complete 180 on him? Thea was ready to fight the Arrow, completely unaware that it was actually Oliver behind that mask and hood. And then, she jumped out the window to escape. I know she trained all summer at Camp Dark Archer, but that moment took me completely by surprise. We've all known Thea was up to something and that she's changed since her time away, but were any of us expecting that kind of fight reaction?

This all leads back to the possibility that Merlyn was lying to Oliver, again, about Thea's mental state during the murder. He claims he brainwashed her into doing it, and she claims to have no recollection of even being back in the city. But can we take either of their words for it?

Arrow seriously loves to torment Oliver every way possible (including, and clearly not limited to, his own death), and one of the easiest ways to do it is to take the people he loves and put them in harm's way. But in this case, they've made Thea the catalyst for the harm, which is an awesome little twist. Now if we add on the layer that she knows she killed Sara (and possibly willingly did it), it will only make Oliver 15 times more tormented, but lucky for us, that will probably leave him 15 times more shirtless.