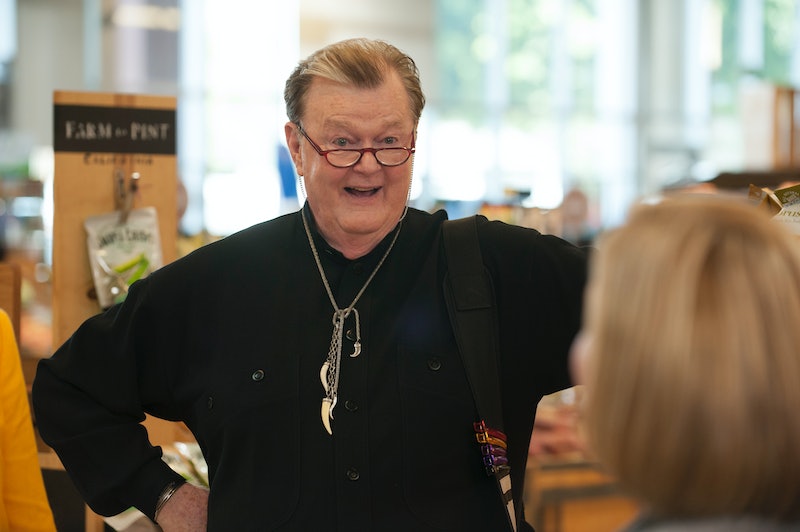 Fans of HBO's painfully hilarious ultra-meta-comedy The Comeback got to see beloved Mickey Deane in a whole new light during this weekend's episode, "Valerie Faces The Critics." We caught a glimpse inside the hairdresser's home for the very first time... and saw quite a bit more than we bargained for. Luckily, I spoke to the actor and he broke down the whole thing for me.

"When I read the script and it said Valerie finds Mickey passed out naked on the bed," recalls Mickey's portrayer, Robert Michael Morris, “I said to [co-creator and executive producer] Michael Patrick King, 'Look. I hate it in shows where someone’s supposed to be naked, but it’s all about artfully arranged bed-clothing.' I said, 'No. If you want me to be buck naked, I will be. I’m willing to do that.' Not only that, but I’m sure everyone who watches the show thinks Mickey is a bottom anyway."

This unflinching commitment to the most un-glamorous moments is what makes the cast of The Comeback one of the bravest in Hollywood. In a typical episode, you may see Lisa Kudrow's Valerie Cherish begging her husband not to leave her, while the cameras are rolling at her directive. You may see Lance Barber's Paulie G. command his leading lady to perform simulated fellatio on Seth Rogen. And yes, you may even see Morris's Mickey Deane immediately post-coitus with a Brazilian boy toy, naked as his name day for all the world (or at least all of HBO's subscribers) to see.

Apart from putting its characters through the wringer, The Comeback is also famous for mounting one of the most surprising comebacks in TV history (pun intended). Season 1 aired on HBO in June of 2005, which makes the gap between seasons two years longer than Arrested Development's seven-year hiatus. But Morris's connection to the series goes back much longer than that — all the way back to the '70s, when he met an aspiring performer named Michael Patrick King. At that time, the future writer of Sex And The City was a student at Mercyhurst University in Erie, Pennsylvania and Morris was running the theater program at nearby Gannon University. The two met when Morris directed King in a play. "Several, actually," clarifies Morris. "The Importance Of Being Earnest, he played Puck in Midsummer Night's Dream, and he played the Chaplain in [Kafka's] The Trail that I directed."

Luckily for us, those early years weren't the end of the duo's collaboration: they reconnected a few years later in the Big Apple. "I was in Erie for five years, and Michael had already gone to New York. Just by accident, I moved on the same street about eight doors, 10 doors down from where Michael was living. So for the 10 years I was in New York, I saw Michael a lot. We've been friends for a long time and always kept in touch through his Murphy Brown days," says Morris. (King was a writer on that popular CBS sitcom from 1991-'92.)

This connection proved to be a boon for Morris when King was creating a new comedy for HBO with Lisa Kudrow and needed someone to play the role of her fabulously gay hairdresser, Mickey. He thought of his old director, and Morris was called in to read for the part.

"It was my first audition in L.A.," he remembers. "I was working for my brother — he has a medical equipment company — and I got a call to come on an audition. After I left, I thought, 'That was fun, but I'll never see these people again.' But then I got a callback, and Lisa and I had to do it again for the brass at HBO. I had no expectations at all."

So how did the 60-something Hollywood amateur land such a coveted role? Morris isn't ashamed to admit that a little bribery may have been involved.

Morris had pieces of costume jewelry that he has used to bribe his students when he was teaching, and it came in handy during the audition process. "Well, I had some left over, and when I went to the audition, when we were all done, I stood up to leave and I said, 'Now, Mickey wouldn't have come to visit you without bringing you something. So here.' And I held out this necklace, and Lisa came over and she said, 'Oh my, so beautiful!' And I said, 'Well don't get excited, it's not real.' She said, 'Nobody will get that close to find out,' and she gave me a big hug," he says.

So did those fake diamonds land him the role? They certainly didn't hurt: "When we had our first read-through at HBO, Lisa was wearing the necklace," he says. But beyond that, Morris has nothing but the highest praise for his co-star: "She's so sweet. She's a lovely, lovely, kind, bright, wonderful actress. I think everyone thinks she's a dingbat because she plays Phoebe [her Friends role] so well, but she's really a good actress and this show gets a chance to show that. There's so much depth to her."

When asked if he envisions a Season 3 of The Comeback , Morris sighs. "One can dream, can't one?" he says.

What are the chances of the stars aligning for a third time? "I've heard rumors that HBO would like more," he says, "but both Michael and Lisa are so terribly, terribly busy. Michael's still got 2 Broke Girls [on CBS] and he's working on a couple of movies. And Lisa's got Web Therapy [on Showtime] and Who Do You Think You Are? [the NBC documentary series that she executive produces] and god knows what other stuff. So I have no idea. But if it were to happen, I think that would be swell."

Where would Morris imagine Mickey being yet another nine years down the road? "In a home," he says bluntly. "Mickey would probably be in a walker if they waited another ten years. I hope I would be around to do it." When I suggest that he'd likely have another hot Brazilian boy toy that he'd met online, Morris laughs. "You mean Mickey or me?"