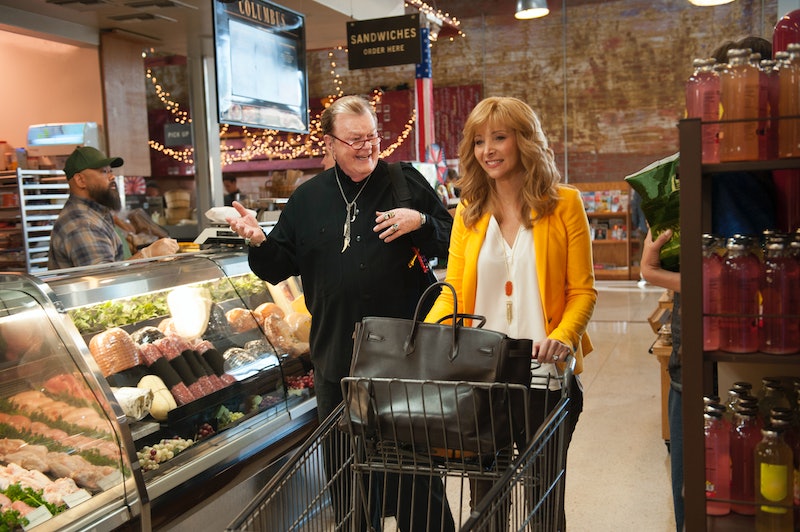 In both of its seasons, HBO's The Comeback has been, at least in part, an unrelentingly vicious takedown of our society's obsession with reality television. When Season 1 debuted in 2005, nobody had any clue what we were in for: a veritable tsunami of so-called "reality" programming that would all but dominate the airwaves for the next decade. Nine years later, Season 2 doesn't have the same eerie prescience, but it does benefit from plenty of targets to lampoon. The premiere contained a hilarious send-up of Bravo's Real Housewives franchise, and the season as a whole has been an uncompromising look at the lengths an aging actress will go to in order to remain relevant in Hollywood. I got the chance to chat with Comeback co-star Robert Michael Morris (who plays Valerie Cherish's erstwhile hairdresser Mickey) about his show, its relationship to the reality programs it mocks, and why misogyny could be the reason The Comeback was cancelled initially.

"I think people today are so frightened of their lives — economically, maybe — that they'll watch anything," bemoans Morris, his normally jolly voice turned somber for once. "Back in the old days, they used to have one man with bells in his cap who worked for the king and made him laugh. And now every man is the king of his own castle, and television is our jester. Who knows where it will go? We've been gone for ten years, and back then all you had were people on an island eating bugs, and people considered that entertainment. Now there's all these other ones, there's dancing stars... and duck people."

It's interesting to note the ways in which The Comeback blurs the line between scripted programs and reality television. Obviously, nobody would mistake The Comeback for reality — there's no actress named Valerie Cherish with an Emmy nomination for an HBO series called Seeing Red — And yet it's presented with the air of authenticity, and mirrors many truths about Hollywood. Conversely, many "reality" shows are just as orchestrated as their scripted counterparts.

"What is reality TV, anyway?" asks Morris rhetorically. "Because I know it's all phony. I remember when Survivor first started, my brother and I used to go over to his golf buddy's house and we'd watch it with him and his wife, and we'd try to figure out who was going to get voted off. I kept saying, 'You don't think this is real, do you? I'll tell you now who's going to get kicked off, because it makes for better television!'"

(HBO's meta-comedy isn't the only series blurring those lines anymore, either. NBC's short-lived experiment, Siberia , tried it last year, and Bravo's Girlfriends' Guide To Divorce is basically a scripted version of their Real Housewives franchise.)

But reality TV isn't the only target of The Comeback's merciless lampooning. The show is equally critical of Hollywood's treatment of actresses — particularly women of a certain age. Given the unflattering light Kudrow's Valerie is often portrayed in, and the countless humiliations she's forced to suffer, it's easy to see how someone could interpret The Comeback as actually anti-feminist.

But that would be missing the point, Morris argues: "The point is not the humiliation, it’s watching her cope and overcome the humiliation. Remember at the end of the first season, in 'Valerie Does Another Classic Leno,' she was so mad at Jane and the way that The Comeback was edited, and things were taken out of context and rearranged, and she was made to look a fool." He adds, "And she goes on the Jay Leno show to blow the whistle on that... and then she finds out that, oh my god, she’s a success! So the arc of the first season is: she suffers suffers suffers suffers, but she succeeds at the end. And that’s a great thing."

And the story of Valerie's struggles and doubts is far from specific to her character. "I have a friend now who’s a wonderful actress, a wonderful actress," Morris tells me. "She’s done a couple of long-running series, but it’s been a while since she’s had a show, and she’s kind of begun to doubt herself. So she’s moving back to New York to kind of reinvent her career."

It's Morris's opinion that this misogyny is exactly what led to The Comeback's cancellation in the first place. "When we got cancelled, people were going, 'I don't understand!' But she was the only female lead of a show on HBO." (Sex And The City had ended the year before.)

"Everything else was male leads. The Sopranos and all those other shows, there were women in them — and they were good women's roles — but the lead was always the man. The Comeback was the only show that HBO had where a woman was the lead, and I think some of the men... their noses got out of join with that, I think it threatened a lot of insecure men," he says.

Thankfully, that wasn't the end of The Comeback's story. "Now there's a whole new group of people at HBO, and they called [co-creators] Michael [Patrick King] and Lisa [Kudrow] into their offices and said, 'We made a mistake.' Have you ever heard of that?" Morris asks.

The actor contributes the show's renewed success with its "female lead who is flawed but incredibly plucky and who will not give up in pursuit of her dream," as he describes Valerie. He's particularly effusive when it comes to her relationship with his character. "Valerie and Mickey have a longer relationship than she has with her husband. They've been friends for 25-plus years, and she knows all about him. If Mickey were straight, he would be in love with Valerie. Instead, he just loves her," he says. "I think that's really neat, to be able to have a show where there's an older, fat, gay man having a wonderfully warm, personal relationship with a straight woman. You don't see that very often on TV! When Modern Family came on, a friend in Mississippi called me and said, 'He's doing you on The Comeback!' Well, you know, that's alright. [Eric Stonestreet] may have Emmys..." (he has two) "...but I have my memories."

Does Morris envision any Emmys in The Comeback's future? "I'll tell you this: if Lisa Kudrow doesn't get nominated, I'm gonna burn something down." When I offer to join him, he proposes, "You bring the kerosene, I'll bring the matches!" Sounds like a plan.

More like this
'Survivor' Is Finally Coming Back To UK Screens
By El Hunt
The Bling Ring's Alexis Neiers Has Come A Long Way Since Her 'Pretty Wild' Days
By Sophie McEvoy and Arya Roshanian
15 Piping Hot Behind-The-Scenes Secrets From 'Great British Bake Off'
By Emily Dixon and Darshita Goyal
What’s New On Netflix: Ana De Armas’ 'Blonde' & A Nick Kroll Special
By Arya Roshanian
Get Even More From Bustle — Sign Up For The Newsletter