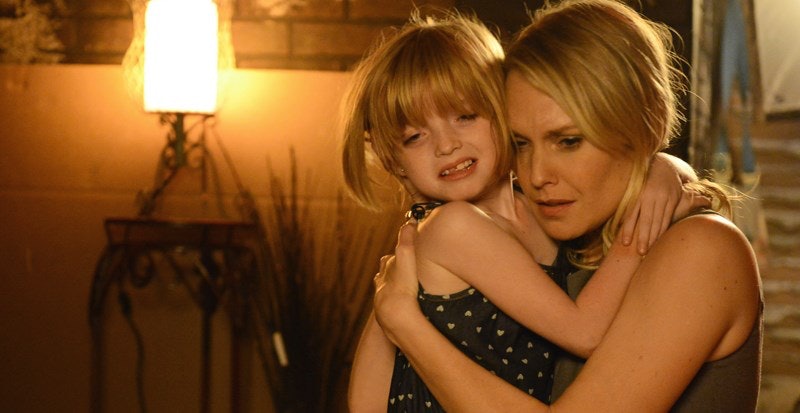 There's always something sinister about a new babysitter — a relative stranger who comes into a home and takes care of the most vulnerable members of a family. I guess that's why babysitters are always good subjects for thrillers. (The Hand that Rocks the Cradle forever changed my life — I must've watched that movie a million times when I was too young to even think about having a family to protect.) Next on tap in bad-babysitter thrillers is Nanny Cam, which premieres on Lifetime on Dec. 28. In the movie, a working mom begins to suspect that her teenaged babysitter is out to destroy her family, but she's resigned to watching it all go down via Nanny Cam. Hey, that actually sounds kind of plausible. Is Lifetime's Nanny Cam based on a true story?

While the idea for many Lifetime movies are ripped straight from the headlines, Nanny Cam is a work of fiction. That's not to say that no one's ever caught any bad behavior via a Nanny Cam. It probably happens all of the time. But the particular details of this family, this babysitter, and their Nanny Cam, are a work of fiction.

If you ask me, it's probably better that way — you can get a lot crazier when you don't have to worry about sticking to a true story. Here, some other strange ways that Nanny Cams have made their way into cinema.

The Wolf of Wall Street

Okay, this one was actually based on a true story, but Jordan Belfort's life is so exceptional it may as well be fiction. In one scene, Belfort (Leonardo DiCaprio), and his wife, Naomi (Margot Robbie), are fighting, and she starts playing some seriously sexually frustrated head games with him. Turns out, all of her, um, antics are caught on camera by a Nanny Cam and enjoyed by their on-staff security guards. Oops! First rule of Nanny Cam: Never forget that you have a Nanny Cam — especially if you're not the only one watching it at the end of the day. (Also, if something in your house is recording, you might want to wear underwear just in case.)

Usually, the Nanny Cam is deployed so parents can catch the bad behavior of their babysitters. In The Nanny Diaries, Annie (Scarlett Johansson, back when she did movies like The Nanny Diaries) turns the tables. She vents about her boss, Mrs. X (Laura Linney) into the watchful eye of the teddy bear, knowing that the recording will eventually be played in front of a crowd of Mrs. X's contemporaries. I think we've all had moments where we've wanted to vent about our bosses that way, right? I guess doing it via Nanny Cam is one way to go about things if you're too shy to say those things right to your boss' face.

Who says it's the babysitters who get caught on the Nanny Cam? Paranormal Activity 2's camera isn't disguised in a teddy bear, so I guess it's more of a regular security camera/baby monitor than a true Nanny Cam. But it definitely catches something unexpected — and something that'll make you think twice about ever installing a camera anywhere in your house ever again. Maybe the parents in Lifetime's Nanny Cam should've watched this first.