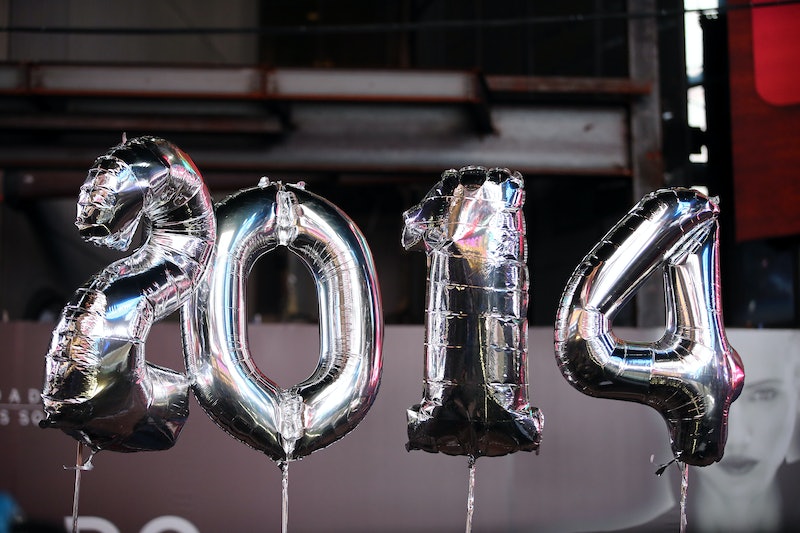 Ah, 2014. The year that was — or is very close to being discussed in the past tense as 2015 quickly approaches. It was a year in which Beyoncé reigned as our queen, Taylor Swift became our Princess of Pop, and pumpkin spice lattes remained the Autumn drink of choice. But it's been a long year, so it's impossible to encompass in one sentence, one paragraph, or even one article. TV will attempt to air 2014 roundups as specials and on the news, but one way I'd like to do it is a more modern approach: Through Vines. Yup, those six-second videos that are sort of like GIFs with sound.

Vine, and its avid young followers and Viners, actually has been present and reflected through some of the year's biggest moments. Lots of brands and news organizations have established Vine accounts — such as People, Old Navy, and Nordstrom — that have captured some of 2014's greatest victories and losses. Vine itself was just as big in 2014 as it was in its 2013 debut year. So, just like those "The Year That Was" TV specials I mentioned above, here's my attempt to retell all the themes, trends, and craziness that was 2014 with some select Vines.

Flappy Bird Had Us All Frustrated

Pharrell Got "Happy" at the Oscars

Beyoncé Was Her Usual ***Flawless Self

Bryan Cranston & Julia Louis-Dreyfus' Made Out at the Emmys

Vine Captured the Protests in Ferguson

We Lost a Comedic Legend

Star Wars: The Force Awakens Got a Trailer

Kim Kardashian: Hollywood Had Us All Addicted

Sony Was Hacked By North Korea & Pulled The Interview

And those are still only some of the year's biggest moments in Vine form. If you spend some time on Vine, I'm sure you'll find even more condensed memories from 2014.

More like this
Beyoncé’s Special Tribute To Sister Solange Was Both Touching & Hilarious
By Stephanie Topacio Long
Everything To Know About Taylor Swift’s 10th Studio Album, 'Midnights'
By Grace Wehniainen and Jake Viswanath
There's A Taylor Swift Easter Egg In Ryan Reynolds' 'Deadpool 3' Teaser
By Marina Watts
14 Women To Watch This Oscar Season
By Marina Watts
Get Even More From Bustle — Sign Up For The Newsletter