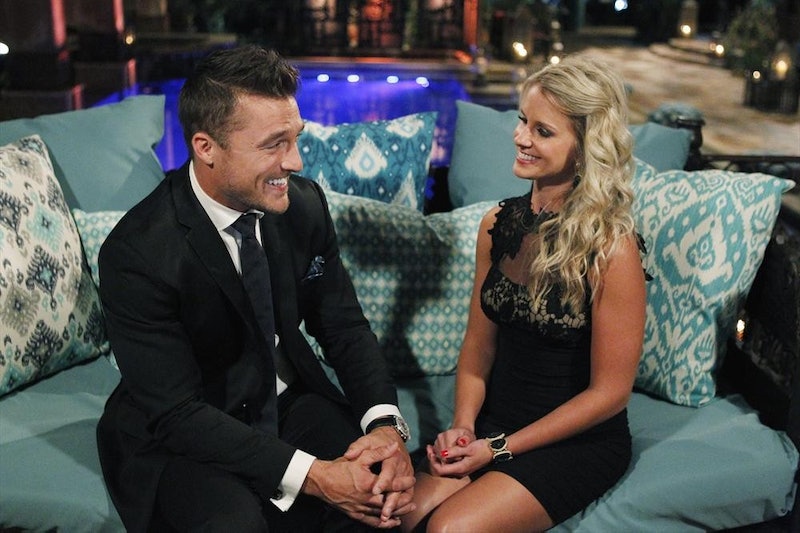 Signs would point to the fact that Chris Soules is a gentleman — after all, he does have that whole Midwestern-charm thing going on (apparently, the two Bachelor finalists will be flown to Iowa to visit his family farm — and let's be real, the hilarious Chris Soules Bachelor promo was shot in a corn field, for goodness' sakes)... but is Soules really the gentleman The Bachelor is making him out to be?

It's hard to believe that someone who's being marketed as "Prince Farming" (and let's not forget the accompanying, awkwardly double-entendre of a soundbyte, "You can plow my field!") could possibly have anything but the best of intentions. It is, in fact, hard to find a profile on the man that doesn't say the words "bales of hay" or "fields of corn" in it, and I'd generally say that bodes well for a wholesome, gentlemanly image. I mean, remember him from The Bachelorette? Dude had the perfect concoction of rueful graciousness when Andi Dorfmann dumped him mere months ago.

Plus, to his credit, he does seem about as different from Human Disaster Juan Pablo as possible — he even went out of his way to speak out against Juan Pablo in an interview with the Inquisitr, saying, "[He] handled things maybe not with the most respect for some of the women and not much respect for the process that it deserved. I think we were very different in that regard." Promising, no?

It sounds like Chris actually wants to play the game, rather than buck the system. He also mentioned (in the same interview), "I think going into this my number one priority was to find a soul mate, find true love, find somebody that I could see myself spending the rest of my life with. Then once I find that then we, you know, we figure out where our life together will make the most sense.” Again, sounds pretty darn promising, eh? It's almost enough to make me wish I was a contestant (though you didn't read that here).

So, yes — everything we've seen thus far would seem to indicate that he is indeed the perfect gentleman (well, maybe except for that handful of DUIs, but maybe it's time to let the mistakes of his youth go?).

Let's not forget, however, that this is The Bachelor we're talking about. Who knows what's in store? The show's ultra twisty-turny reputation in conjunction with this dramatic Bachelor teaser, and whispers that imply that this season will see an upset even bigger than the already-infamous whole Juan Pablo debacle, and anything (literally, anything) could happen — so grab the popcorn, and buckle up because, well, you know: