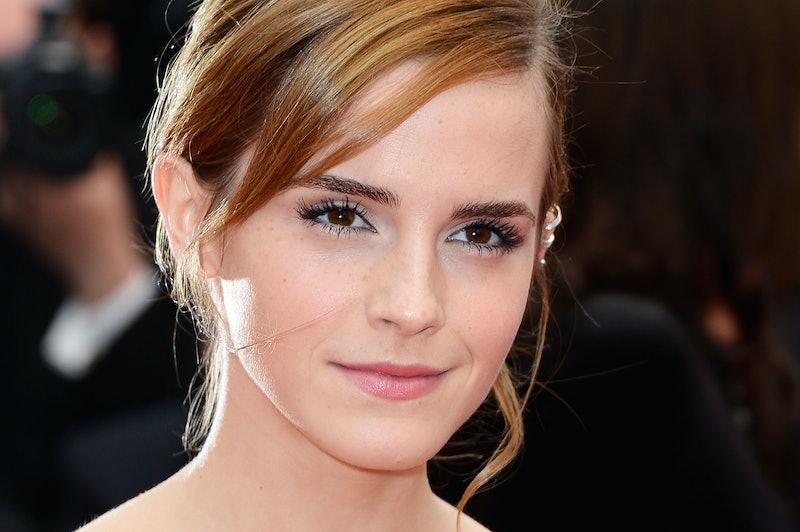 Don't get me wrong. We probably shouldn't start ranking our feminists on a list of best to worst because therein lies madness. At the most, we can rank the way celebrities answer the feminism question on a graph of yes and proactive about it to no and inactive about it, but feminism isn't a competition and there's no single right way to do it. However, this is still a surprisingly cool honor that I think deserves to be highlighted. According to the Ms. Foundation for Women in conjunction with Cosmopolitan, Emma Watson is Feminist of the Year 2014. The former Hermione Granger was given this honor for "[embracing] the term 'feminist,' [speaking] out for women's equal rights, or [battling] against sexist oppression."

Watson's name tops a short list that includes Laverne Cox, Rachel Maddow, Beyoncé and Cher — as voted there by an online poll from Ms. Foundation and Cosmopolitan. The extended list includes Amy Poehler, Tina Fey, Meryl Streep, Ann Curry, and Mindy Kaling. All of these women did something to further the feminist cause at some point in 2014, some more famously than others, but, like I said, this kind of thing is both difficult and unfair to rank. The sting of this is eased by the fact that Ms. Foundation and Cosmopolitan left it up to the online pollers to pinpoint who they thought had done the most for feminism in 2014, but that doesn't change the fact that these celebrities have been put in competition with each other in a way that women, quite frankly, shouldn't be. Especially not over this.

Let's focus on the good. Not only does the list highlight some great feminists from different walks of life — mainly actresses, yes, but also a singer, a journalist, and a talk show host — but it also doesn't just specifically focus on white feminists. Yes, seven of the ten women on the list are, in fact, white, but the traditionally ignored or marginalized group of feminists that are women of color find some representation here in the form of Cox, Beyoncé, Kaling and Curry. (Which, to be honest, is more representation than we usually get.) 2014 wasn't just a great year for furthering feminist causes; it was also the year that brought the word feminism to the forefront of conversation so much that TIME Magazine "jokingly" suggested that it be banned.

Watson was a huge part of that, of course, but would we have expected any different from the girl who once played actual feminist and budding political activist Hermione Granger? Her most famous moment of the year was her much-discussed U.N. speech promoting the #HeForShe campaign, encouraging men to take their place within the feminist movement alongside women, and the repercussions of that are still being felt even now. From male celebrities showing their support of #HeForShe to the criticism that has been leveled against Watson's "first-world feminism," the fact of the matter is that people are talking. And just getting a conversation going about these issues is a big deal.

Whether or not you agree that Watson is the most feminist feminist of all the feminists — at least this year — it can't be denied that she, and the other nine women on this polled list, have done their part to make feminism trendy and attractive to a generation raised on the idea that the F Word meant bra-burning, man-hating oversensitivity and suspicious eyes seeing LADY INJUSTICE everywhere. 2015 looms on the horizon to show how the consequences of all of these actions will affect the movement, and what the word feminism will actually come to mean for the next generation, but 2014 marked large leaps in clarifying exactly why everyone everywhere should identify with the F Word. If nothing else, the list of Feminists of 2014 is the perfect jumping off point to do more research on feminism and exactly what these women have done for the movement. That seems like a better use of one's time than ranking them against each other.