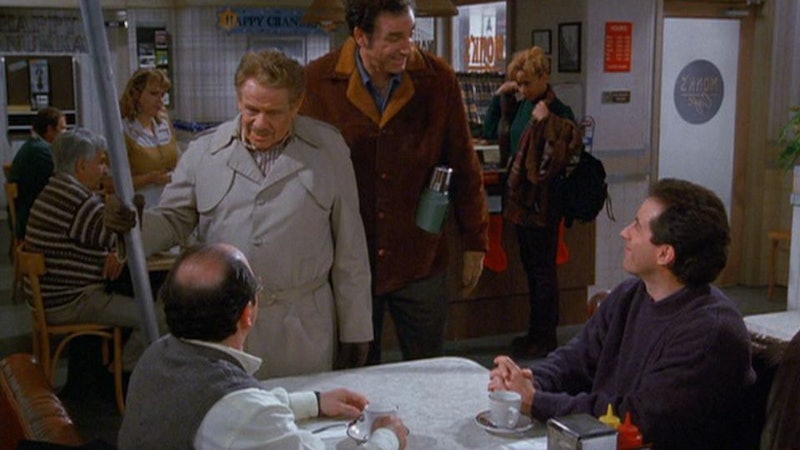 Brace yourself Seinfeld fans, Festivus is nearly upon us. That's right, on December 23 we gather to celebrate the series' most famous holiday. For some of us that may just mean popping on a few episodes while decorating the Christmas tree, while others are breaking out the aluminum pole and prepping for the airing of the grievances. The latter, of course, is awesome. But like the show itself, Festivus truly has a dark side, and you really need to negotiate its customs carefully.

Unlike other adorable and innocuous made-up holidays (See: Chrismukkah), Festivus is marked by fear, intimation, disappointment and distinct lack of commercialism. And of course in the show this pays off with big, big laughs. In fact, the Festivus episode is proof that Seinfeld was an infallible force deep into its run. However, in real life, the awkwardness doesn't get undone at the end of every episode, and you could be stuck with a lotttttt of negative feelings, if you don't play your cards right.

Luckily, I'm here to help. As a regular practitioner of the holiday, here's my guide to celebrating Festivus without it evolving into a hurricane of pain and drama.

In the show Frank uses an unadorned pole in lieu of Christmas tree (he finds tinsel distracting). It's made out of aluminum (because it has a very high strength-to-weight ratio) and polishing is not required (a lack of luster is preferred). Seems easy enough, right? Except... I don't have a bunch of aluminum poles lying around. Maybe that's uncommon, I don't know. If you're stuck in the same boat and you're throwing a last-minute Festivus, it's very unlikely that you already have a go-to Festivus Kit at the ready, or that you purchased your pole off Etsy a month ago. So what can you do to improvise?

Stacking paper towel rolls and spray painting them silver would be a solid alternative, unless you're nearing the end of like three roles, I can't imagine this being convenient. Another common Internet practice involves stacking beer cans (PBR, ideally) until it creates a makeshift aluminum pole. If you're going to go this route, you may want to do it the night before. Drinking heavily early into Festivus is not recommended, which brings us to our next tradition.

The Airing of Grievances

You might have a lot of problems with the people at your table, but spouting it senselessly in a Costanzian manner might end both Festivus and a handful of friendships in one fell swoop. So at risk of sounding like a total Marnie Michaels, let this be a healing experience. Because God knows we couldn't — and shouldn't —scrap the Airing of Grievances altogether, but there's right and a wrong way to do it.

As you sit down to Festivus dinner (lots of red foods by the way, meatloaf, spaghetti, etc.) go around the table and take turns sharing one (I stress this, ONE) issue you have with someone at the table. You know how your friend Madison had coffee with your ex a few months back and you thought it was really sketch? This is the time to say it. However, don't tell Madison that you think she's a two-face who consistently sleeps her way around the group in order to remedy her daddy issues. Waaaay too heavy for a Seinfeld-based holiday. Find another time.

The Feats of Strength

Alright. So here's how we tackle the last great Festivus tradition, and like the Airing of the Grievances, it should be approached delicately.

Eat your Festivus dinner and follow up with alcohol if need be. Although Festivus is typically an alcohol-free holiday, George's boss still surreptitiously imbibes, and truth be told you may need a little booze after the last activity. Follow up with the Seinfeld episode "Strike," the classic episode in which Festivus was introduced into the mainstream. Let laughter and liquor placate you. And after all that, THEN we perform the Feats of Strength.

Basically the Feats of Strength involves wrestling, and the host (that's you!) gets to pick who you get to wrestle. The holiday isn't over until your opponent pins you to the ground.

Now, be cautious in your selection, and try not to choose someone who you ripped apart during the Airing of the Grievances (unless you love the thrill). Also, establish ground rules and take precautionary measures, like maybe moving the wrestle outdoors. It would be a dark tragedy if a lamp was broken or someone's head bled out onto the rug while emulating an episode of Seinfeld (although a hell of a story).

Follow my advice, and I promise your holiday should go off with only mild bruising, both emotional and physical.