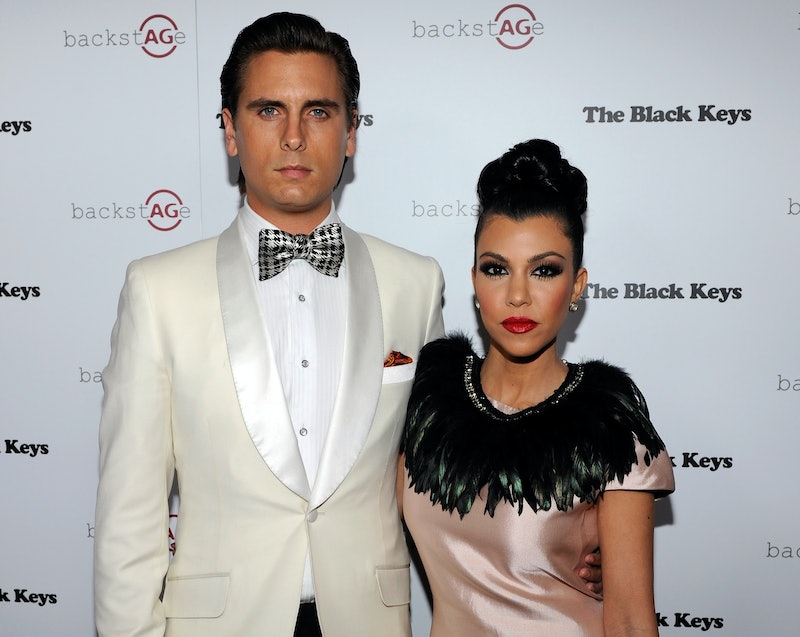 It was only a matter of time before Scott named an official heir to this throne. On Sunday, Kourtney & Khloe Take the Hamptons stars Kourtney Kardashian and Scott Disick revealed their third child's name and it's as regal as you'd expect from the Lord himself. Kourtney and Scott named their newborn son Reign Aston Disick because what else would you name a child born to a lord and a lady? Especially when said child is the second-born son of Lord Disick who, aside from proclaiming his royalty, is a huge fan of luxury cars. So, what was the inspiration behind Reign Aston's name?

First of all, let me just point out how Scott and Kourtney look regal as hell in the above photo. So, I'm not surprised at all that they really went for it with the royalty theme when they named their new son. Seriously, just take a minute to look at them — they absolutely look like two people who would name their child after, essentially, a king's job. But what if Scott and Kourtney are actually super-secret WWE fans? Or they are just really in love with a small city in England? The Kardashians are globetrotters, after all, perhaps one of the many European destinations they've visited over the past year served as inspiration when naming their latest bundle of joy? With that being said, let's take a look at some of the potential sources of inspiration for the naming of Reign Aston Disick.

It's a series about kings, queens, lords, ladies, and peasants. I wouldn't be surprised if Scott's seen an episode or two. Look at Francis' lavish as hell cloak — Scott probably already owns one just like it.

What a King Does Over His Peasants

Maybe Scott's a secret fan of the WWE?

The Reign of Terror

Kourtney and Scott spent a handful of time in France this year where they undoubtably learned a little bit about the country's history, specifically the tumultuous time at the start of the French Revolution.

The Lord loves his Aston Martins.

Is Scott also a secret fan of European football?

This seems like a long shot, but Bustle writer Jamie Primeau points out that there is a section of the English city of Birmingham called Aston. We all know how Kourtney longs to leave her celebrity life behind and settle down in a quiet town. Maybe the Kardashian-Disick clan will relocate to the UK?