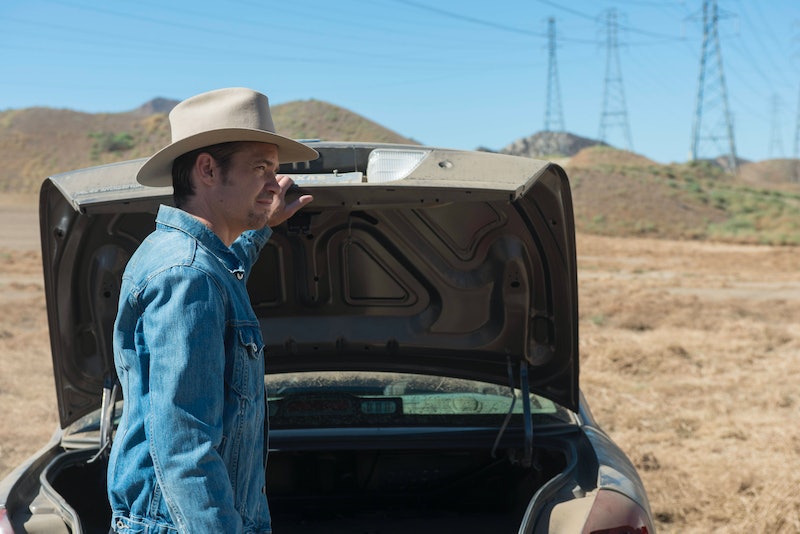 But, what do we know about Justified 's final season so far? Seriously, is there anything left that hasn't happened to poor Givens already? I mean, once you investigate the identity of a man whose body fell to Earth with a parachute and a ton of cocaine clipped to it, you've pretty much seen it all, right?

Turns out, there's plenty of crime left in Kentucky for Givens to try and clean up. Specifically, there's still one major relationship that needs to be tied up before Givens can (hopefully) leave the state and go on to be a good daddy to his daughter. Or maybe he'll decide Kentucky needs him for good? That may be unclear, but here's what we know for sure:

Givens Will Have His Final Showdown with Boyd Crowder

The two have been cat-and-mouse for all five seasons so far. They were great as perfect enemies, and even better when they had to team up as imperfect partners. But all that must come to an end. “This story is about these two people that came from a very similar set of circumstances, but one went this way and one went the other way, and yet, they’re more similar than either one of them cares to admit," Walton Goggins, who plays Crowder, told Entertainment Weekly. What happens when they have to square off for the last time, though, is anyone's guess.

But That Doesn't Mean There Aren't New Villains

Even as the show is winding down, the cast is beefing up. Actors Sam Elliott and Garret Dillahunt are debuting as two new bad guys. According to The Hollywood Reporter:

Elliott will portray Markham, a legendary Kentucky gangster who returns from exile with a private army and a lot of cash — thanks to the legal weed he grew in Colorado — determined to win back his empire and lost love Katherine Hale.

It's actually kind of surprising that Elliott hasn't been on the show before. The actor — you probably know him as the narrator from The Big Lebowski —has such a sinister cowboy look about him naturally.

[He] will portray Walker, a special ops veteran who spent most of the last decade deployed in combat zones, as a soldier and later a private contractor. Now he uses the skills he developed during his military career in his job handling security for a quasi-legal businessman.

Colton Rhodes, also ex-military, was one of the best villains on the show so far (he was the one who told Tim he wanted Gérard Depardieu to play him in a movie), so I have high expectations for Walker.

Forget Raylan and Winona. The true love story of the series turned out to be, surprisingly, between Boyd and Ava Crowder. Or did it? We left off last season they were on, well, less than ideal terms. Do they patch things up? In an interview with Nuke the Fridge, actress says...maybe. "The way it ends, last season I get out of prison without his help and I know he made a deal with the marshals," she says., adding, "The deal wasn’t to get me out. It was to leave him alone, so there’s always that hanging over our heads. But these two, they’re in love so I don’t know."

She also says she has high hopes for Ava on her own. "By the end, I want her to be alive," she says. "I really want Ava to be thinking about Ava and taking care of Ava at the end, to really come out of this on top for herself, what’s best for her."

That would be a nice change for the ladies of Justified, to be sure.