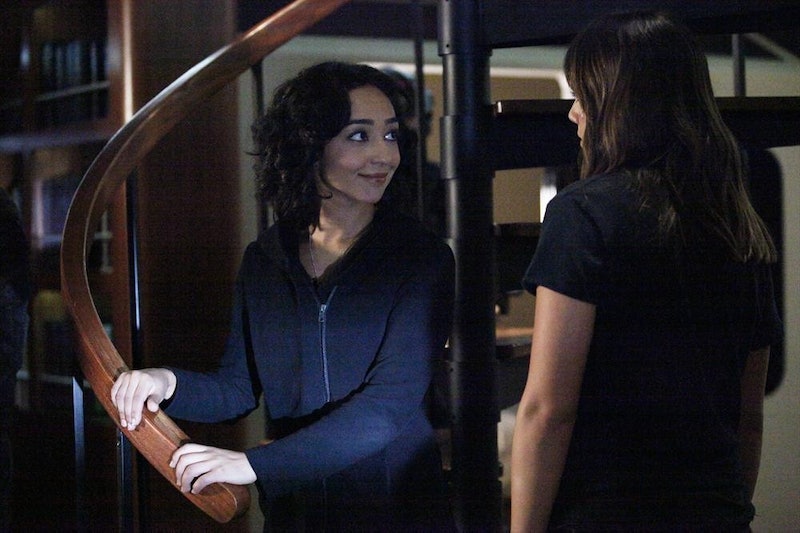 We really don't know much about what the landscape is going to look like after Agents of S.H.I.E.L.D. 's cliffhanger-filled midseason finale, "What We Become" (apart from the fact that Blair Underwood will appear as Agent May's ex-husband. Some ladies get all the luck, eh?). But I'm hoping that the newly-revealed Inhuman Raina is going to play a pretty large part. She's always been a fascinating character, and this whole Terrigen Mists thing is sure to do a real number on her storyline.

Raina has been an enigma from the beginning (heck, she was known solely as "The Girl in the Flower Dress" for most of the first season), and time hasn't done much to reveal any of her mystery. Add in all of her cryptic one-liners and decidedly grey moral compass with her crazy, supernatural transformation and you've got yourself, well... an enigma shrouded in mystery who might just be headed for super villain-dom.

Now, Raina has never quite been on the good team — her alliances have historically shifted between S.H.I.E.L.D. and Hydra, but it's always come back to number one — she'll side with whoever can benefit her the most. I don't know how much we'll be seeing her in Season 2B yet, but I'm guessing she'll have quite the presence as a rookie Inhuman, along with Skye. After all, they both found out they have super powers, and there's sure to be a lot of baggage and unpacking of said baggage as we make our way through the season

There are already a lot of theories as to who she'll end up being — Bustle's Leah Thomas theorized that she could either be the Inhuman Princess, Luna Maximoff (there were those gold, gold eyes after all) or any of the cat-based superheroes (Tigra, Feral, Thornn and/or Black Cat), which all make a lot of sense. Here's what I've been thinking about, though: Is her physical transformation permanent? Will she look like — as Leah pointed out — post-Polyjuice Potion Hermione forever?

Skye seems to have gotten pretty lucky, at least in the no-physical-change department — I mean, the sudden development of a feline-esque face together with golden eyes and what look to be some kind of whiskers has got to do a number on a person, right? Especially for someone who seems to rely so heavily on her appearance. When you think about it, S.H.I.E.L.D. has gone out of its way to establish the fact that Raina puts a lot of stock in her looks (take, for instance, her well-documented love of flowered dresses), which makes me think that the choice to give her a visible mutation was deliberate. Because when you add in her vanity to her hubristic excitement at the chance to be granted powers (an attitude which juxtaposes interestingly with the protagonist's reluctance to accept hers — Goofus and Gallant much?), and you've got yourself a handy villain origin story.

I'm thinking we'll see Raina trying to cure her powers (she is a scientist, after all — why not take a leaf from Beast's book?). And if/when she can't revert to her former appearance, I'm predicting some major fallout — perhaps she'll seek revenge on the man who filled her with dreams of what she could be — maybe we'll even get a showdown with Skye's dad/The Doctor/Calvin Zabo/Mr. Hyde. No matter what happens, I'm predicting/hoping for a super-evil Raina for Agents of S.H.I.E.L.D. Season 2B — because what's better than a tortured, multi-dimensional villain?