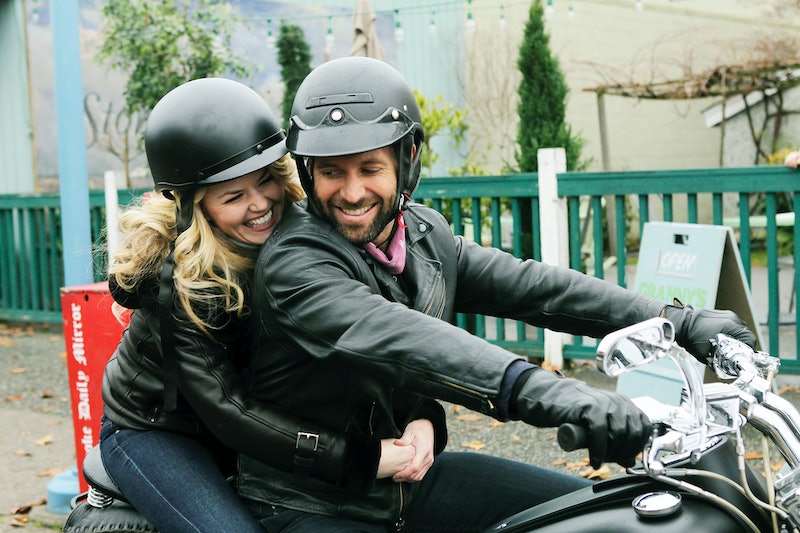 Get ready for a blast from the past, because Pinocchio is returning to Once Upon a Time in Season 4B. It may sound like a tall tale that would make his nose triple in size, but the show is really bringing back August (played by the charming Eion Bailey) when it returns from hiatus on March 1. Although he won't be reuniting with Emma in present day — which is probably for the best, considering she and Hook are finally happy — he will appear in flashbacks, likely during Rumplestiltskin's search for The Author. When we last left August, he was killed in Season 2 and turned into his wooden form before he could warn Emma & Co. about evil Tamara. He was later saved by Blue, but he was resurrected in seven-year-old form instead of his scruffy, 30-something self. It was tragic. But considering we thought he was the elusive Author for a long time and he's credited with adding some pages to the fairy tale book, his scenes will likely provide some necessary answers for either Rumple or Operation Mongoose, a.k.a. Regina, Henry, and Emma's mission.

Pinocchio's return isn't the only character addition we'll see in Season 4B, though. OUAT also cast Ernie Hudson as Poseidon, Ursula's father, and though he isn't a traditional fairy tale villain, it could be twisted that way. The Greek sea god is actually King Triton's father in The Little Mermaid, so with this new spin on Once, I'm guessing he will lean toward the evil side, helping Ursula take down Ariel. Speaking of, JoAnna Garcia Swisher will return as the mermaid during the rest of the season, hopefully still living happily ever after with Prince Eric.