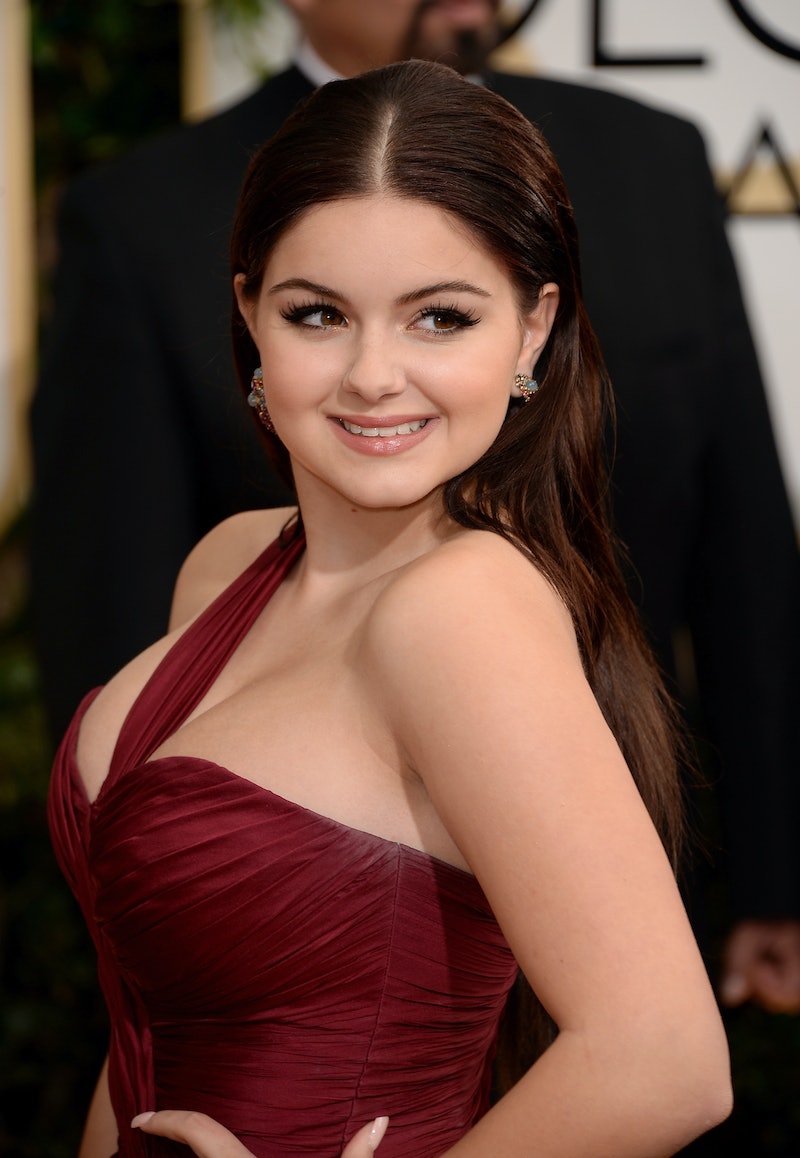 We all know that growing up is awkward, annoying, and all types of weird. Growing up on an Emmy award winning TV show though? That's an additional problem many of us managed to avoid. I've been watching Modern Family since season one and can't help but mourn the loss of hilarious little Luke, high school terror Haley, and middle school nerd Alex. Although I love watching my favorite family grow and the Dunphy kids' older ages bring along their own kind of hilarity (hello, Haley's 21st birthday episode!), I'm still sad to see the siblings grow up. And of course, growing up on TV brings its own set of problems to the actors themselves: Opening up to People Magazine recently, Ariel Winter talked about the challenge of dressing for her new body type.

In a world that instantly sexualizes female child stars as soon as they begin to develop (anyone remember that countdown to Emma Watson's 18th birthday?), it's hard to become a teenager in the limelight. Wake up one morning with big boobies and suddenly you're the talk of Tinsel Town and suddenly you can't wear the same clothes you wore six months ago without being called a trashy slut just for being graced with a more mature body.

“It’s interesting, because I’m very young, but I have a more mature body. So it’s a blessing and a curse. I have to find things that are appropriate to wear but also fit my body well, so it still looks good,” Winter said.

It sucks that it seems that the media demands that girls should "dress for their body type" the very moment they begin to grow up, but Winter seems to be handling the challenge just as smartly as her TV counterpart. “I have more of an edgier style. I’m not pink, ruffled, preppy... So the mature style and the more mature body goes with the age that I would like to be.”

Winter isn't the only celeb to have suffered through growing pains. Check out these other ladies who dealt with the teen trauma of learning how to deal with a new body.

After years of struggling, the singer can proudly say "I Really Don't Care." Demi Lovato infamously went through a battle with bulimia and self-esteem in the public eye, but has since learned to embrace her shape. She captioned a recent Instagram post, "I wasted so many years ashamed of my body when I could've been living the happy and healthy life I live today... I started dressing for me, in clothes that look best on my body."

Xtina has gone from preteen pop star to a raunchy, chaps-wearing, sexy crooner to a married mother of two all in the limelight. After years dressing for her audience, she is officially dressing for herself and her body type. "I have grown up now and have no need to dress like that anymore," Aguilera says about her teenage wardrobe. "Embrace your curves and who you are."

The 22-year-old struggled with being a teen model who doesn't exactly fit into the stereotypical, stick-thin mold. "I wish I had smaller boobs every day of my life as I would love to wear spaghetti tops braless or go for the smallest bikini design," she told The Sun. I know I say I wish I had smaller boobs – and that’s true because at least twice a day I wish that. But the grass is always greener, as they say!"

Confirming that the grass really is always greener, Ariana Grande had the exact opposite problem growing up. "I was like 12 and all the other girls in my grade had huge boobs already — and I was puny. I’m tiny still to this day — I’m a 32A," Grande revealed to Twist Magazine. "So, I went out with my mom and was like, ‘Mommy, I need this bra.’ It was the most padded Victoria's Secret bra I’ve ever seen in my entire life — I could have used it as a mattress!.. But now I don’t wear anything like that. I’ve grown into my body, and I’m okay with it."

Often blasted by the media for her curvier figure in comparison to her thinner sisters, Khloe Kardashian also had to learn to dress for her curves. "I exercise and try to eat right, but dressing for my body type is key. I used to follow trends and try to do exactly what I saw in the magazines, but I'm not a Victoria's Secret model who can wear anything. Dressing for your body type comes with trial and error, but I know how to do it now."

The Sam and Cat star had a similar problem to Ariel when her boobs suddenly popped up overnight. "That was hard for me to deal with at first. I wanted to pretend they weren’t there. I wanted to strap them down. I wanted to wear two sports bras so that you couldn’t tell that I have boobs." But the Nickelodeon actress also learned to embrace her new body type. "I don’t know if it was just time, maturity or talking to my mom and friends, but I realized we have the body we have, and there’s nothing we can do to change it. I need to just accept mine and appreciate it."

More like this
What Demi Lovato Really Thinks About Child Stardom, Depression, & Sobriety
By Radhika Menon
Kim Kardashian Wore 3 Different Outfits Yesterday & They're All So Good
By Dominique Norman
Confusion Reigns After Kanye Changes His Instagram Profile Pic To Kris Jenner
By Jake Viswanath
Tristan Thompson Proposed To Khloé Kardashian & She Said No
By Jake Viswanath
Get Even More From Bustle — Sign Up For The Newsletter