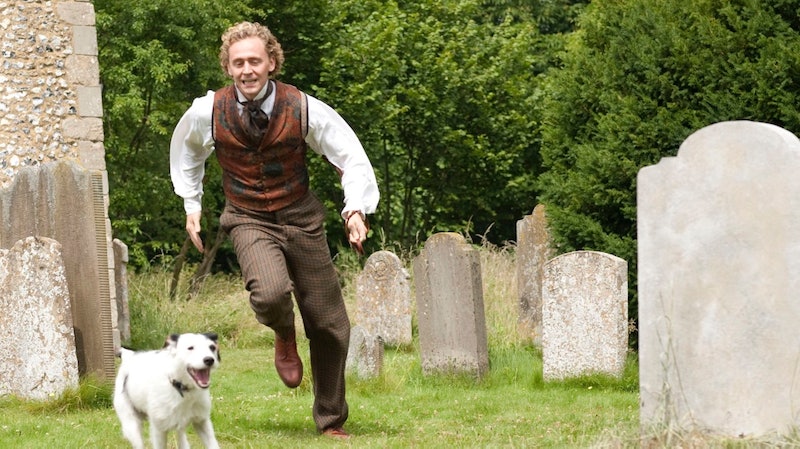 It's really hard to motivate yourself to work out some days, but Tom Hiddleston wants to help. I mean, he doesn't exactly know he's helping — but he sure is. See, there's something really inspiring about how much Tom Hiddleston loves to run, and the joy he gets out of it can help motivate you for your next workout, too.

I'm constantly looking for new ways to keep my spirits up while burning calories, and recently I've found that utilizing Hiddleston works surprisingly well. There's that Hiddleston T-shirt that says "run like Tom Hiddleston is waiting for you at the finish line" which I totally want, but there are other ways for Hiddles to motivate you that don't require shelling out any money.

For example, you could just listen to him talk about running. For him, it's a really nice experience that helps settle his nerves. "Running is my therapy, it keeps me sane," he admitted. But he also likens it to a more enjoyable form of exercise. "I always thought of running as just dancing forward," he once said in an interview.

If that's not inspiration enough to get out there and run, these images of Tom Hiddleston himself jogging should help. He actually makes exercise look enjoyable.

Chasing a Dog in Return to Cranford

But not even in an angry way. Just in a "I'm expending energy and isn't life great?" kind of way.

Running Down the Stairs

Totally counts as burning calories especially if you run back up, afterwards.

Nothing stops Hiddleston from running, not even bulky clothing. Don't let anything hold you back either.

Jogging in the Park

I love the videographer for Suburban Shootout because he/she knew right where to focus.

Working Out for Elle

Bless this magazine for recording one of Hiddles' workouts because the whole video is a must-watch.

Trying to Get Places

You get places so much faster when you run instead of walk.

You can even look dapper while you jog.

Hiddleston always knows when people disrespect Shakespeare and he won't stand for it...but he will run for it.

But he's just so happy!

Running can suck sometimes, but working out doesn't have to be terrible. Just try to channel your inner Hiddleston and run until you can confuse and frustrate people with your overall joyfulness and tenacity.

More like this
Shonda Rhimes' Net Worth Makes Her One Of The Wealthiest People In TV History
By Hugh McIntyre
Devon Diep From 'Bling Empire' Wrote A Song About Her “Second Chance At Love”
By Grace Wehniainen
Everything To Know About Taylor Swift’s 10th Studio Album, 'Midnights'
By Grace Wehniainen and Jake Viswanath
Sarah Jessica Parker “Doesn't Remember” What 'Hocus Pocus' Is About In Resurfaced Clip
By Emily Mae Czachor and Radhika Menon
Get Even More From Bustle — Sign Up For The Newsletter