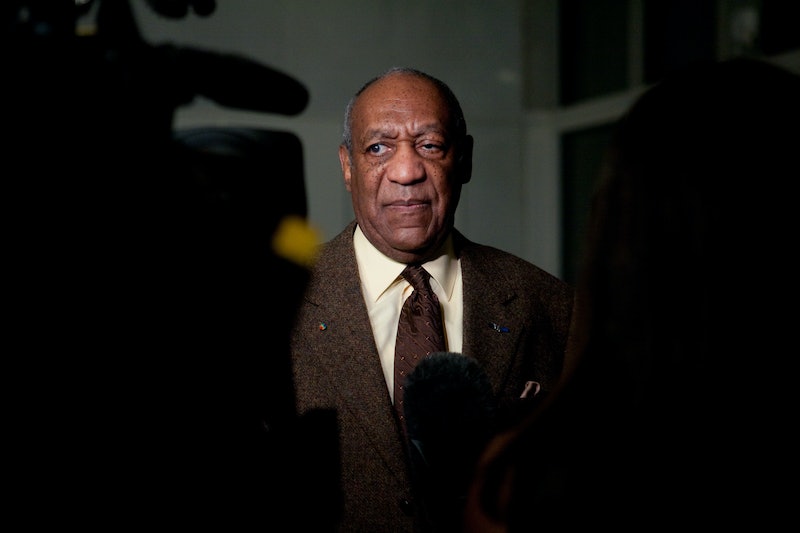 Sadly, another alleged victim is stepping forward accusing Bill Cosby of sexual assault. In an interview with the New York Daily News, Sammy Davis Jr.'s (known for being a Rat Pack member, singer, and actor) former girlfriend Katherine McKee says Cosby raped her sometime in 1970. McKee was a former Vegas showgirl who claims she visited Cosby's hotel room one time after he asked her to buy him some ribs. Upon entering the room, McKee says things happened quite quickly,

I remember I walked in the door, and he had a robe and cap on. He took the ribs from my hands and just grabbed me. He spun me around, pulled my panties down and just took it. We were still standing at the door when he attacked me. It was so fast and so shocking and so unbelievable. To me, there was a different personality involved. He was a different man. It felt like a different person performing the act.

Before the reported sexual assault, McKee knew Cosby for eight years and saw him as a "buddy." Like many have asked about the other women stepping forward, why is McKee talking about it now? She explains,

I was really afraid for my career... afraid that it wasn't the smart thing to do to make a big stink of it. I have discovered and learned in my years of show business, which have been quite a few, I started my career in the late '60s, that this kind of thing happens a lot. Men in show business are very powerful and they assume that they are going to get from you sex. It's an unspoken word. It just happens.

Now, McKee feels safe with the other women in the group who have also said Cosby sexually abused them. McKee also reveals she "totally believes" that Cosby did what these women are claiming and now is the right time for her "to step up and step forward." McKee believes that all the women, including herself, should take lie detector tests, especially since many people are questioning if any of this is indeed true. She feels that it is an important first step in this horrific situation.

As for how Cosby should be punished, she thinks it's already happening. "I think it's already happened to Bill," McKee says. "I think all of the women coming forward and revealing the truth about the kind of person that he is, the other side, the other man, is enough for Bill Cosby. For him to face this is really very difficult."

McKee also wants everyone to be aware that Cosby isn't the first or the last person to commit such acts. It's been going on for years and, unfortunately, still is. "Bill's not the only man in show business that's behaving this way. It's just, I guess, his turn right now."

Cosby and his lawyer have remained in denial of the claims' validity. His lawyer has released statements regarding the allegations, the first of which reads,